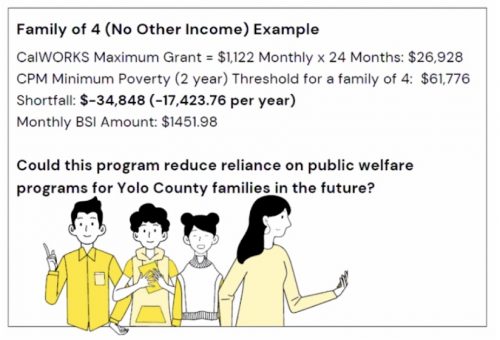 DAVIS, CA – The pilot Yolo Basic Income Program (YOBI) is set to launch on April 1, 2022, throughout Yolo County. Created to help reduce family poverty in the county, the YOBI project will serve as a pilot program focusing their efforts, for now, on 54 families.

Interim Director of Health and Human Services, Nolan Sullivan, presented updates on the project during a meeting between Yolo County and the City of Davis on March 9.

He continued, “I would argue that these are the most vulnerable and most at risk 5-year-olds in Yolo County. It’s our theory that if we apply really intense resources to this 0.005% of the population, we’ll have all kinds of really great outcomes for these kids.”

The target population for the YOBI program is any CalWORKS Housing Support family in the county with a child under the age of 6.

This will be one of the first basic income supplement programs of its size in California and the goal is to have it implemented across the state. It is a 24-month program that will provide a monthly allowance to 54 families, pulling their total income to $1 above the California Poverty Measure.

These families will be co-enrolled, meaning they will still continue to receive support from CalWORKS, child care, food stamps, Medi-Cal and other similar systems, while part of the YOBI program. “They’ll just finally have enough money to not be living under the crushing weight of poverty,” said Sullivan.

“One of the things we’re really proud about is that UC Davis is conducting the full study,” Sullivan stated.

A team of researchers at the UC Davis Center for Regional Change will be leading the study group. They will be conducting a full two-year study with the 54 families in the program as well as 120 control families that are also on CalWORKS, but won’t be receiving the benefit amount. The control group families will get $100 survey incentives four times a year.

There are also plans for a two-year or longer post-study, pursuant to program funding.

One of the key principles of universally based income programs is that participants are free to use their benefits as they want. Sullivan continued, “The benefit payments will come on a prepaid Usio card. It’s like a prepaid debit or credit card. They can spend it on whatever they like to spend it on, there will be no restrictions.”

There will also be quarterly financial literacy training with a local banking partner, “and if they complete the whole training cycle, they will be given a $500 stipend to open a savings account,” Sullivan said.

At the conclusion of Sullivan’s presentation, meeting attendees were given the chance to provide comments.

“I’m happy to see that there’s financial literacy as part of this program,” Mayor Gloria Partida began, “And I would be really curious to see if it’s easier for these families to take advantage of these educational opportunities and things that would move them from the poverty level that they are at, and hopefully that is the outcome.”

County Supervisor Don Saylor has been involved in presenting this program to potential donors. “The idea here is that public assistance will help bring people out of poverty. It’s hard work to be poor, and it’s expensive. To be able to have a little bit of a break where your circumstance is just a tad better, will allow for the type of things that Gloria mentioned,” Saylor stated.

Yolo County Supervisor Jim Provenza concluded, saying “what’s great about this pilot project is that we’ll be able to take a look at what happens if you provide enough money to meet the basic needs. The basis of so many problems in our community comes down to poverty.”

The YOBI project coordinators are still looking for additional funding and will be presenting to the City of Sacramento next week.

The program is still set to launch on April 1.

Share:
Previous : Reisig Accused of Prosecutorial Misconduct in Gonzalez Case That Was Overturned This Week
Next : Another Victim Testifies on Groping at Church Mass