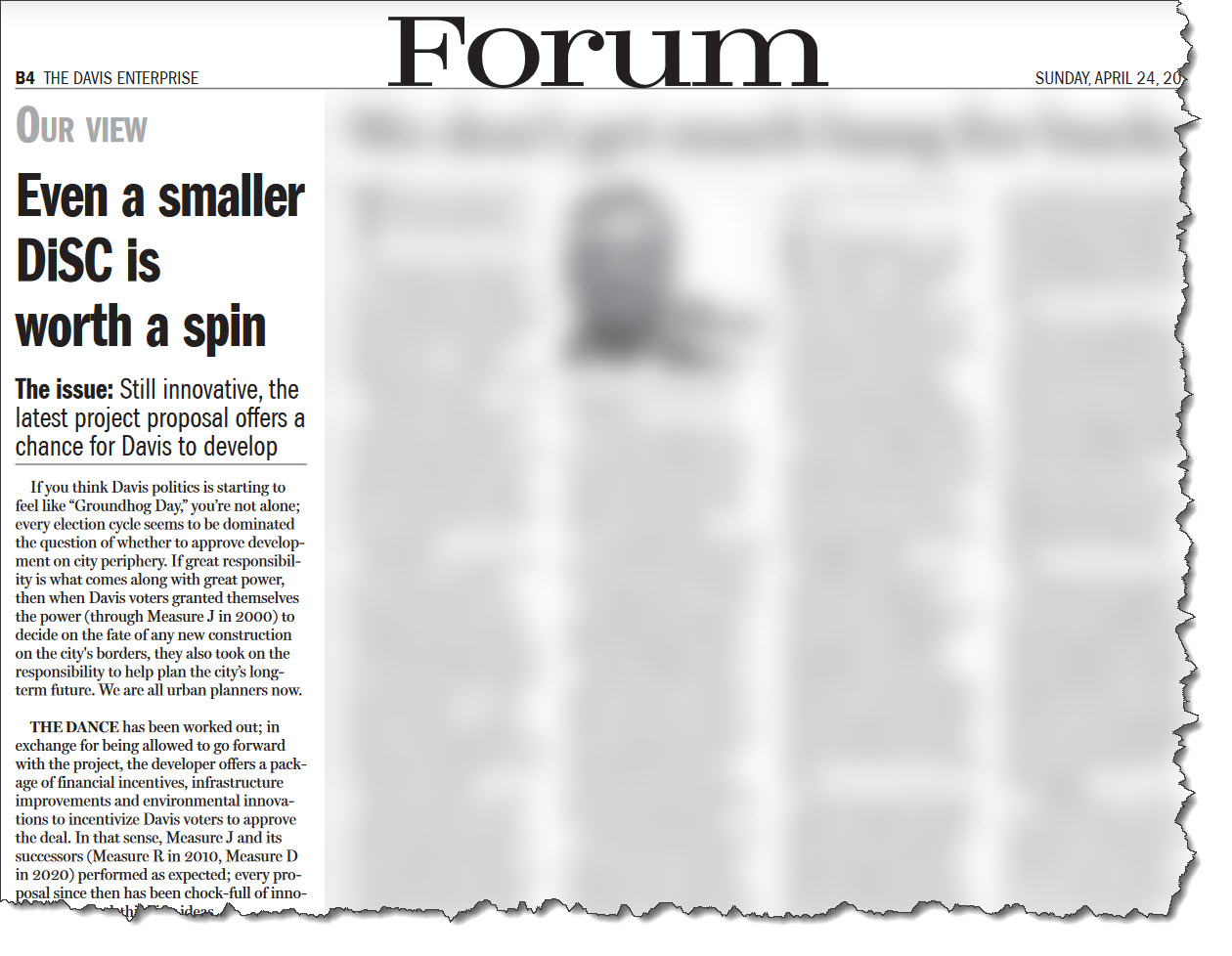 Davis, CA – This weekend the Davis Enterprise announced that it is once again endorsing a Measure J project—this time DiSC 2022.  While detractors will correctly point out that the Enterprise has just about always supported new development, it is also true that if they endorsed the No on DiSC position, the group would be passing out copies of the editorial at Farmer’s Market.

The editorial points out that Davis politics is “starting to feel like ‘Groundhog Day,’” but they also point out that that is by design, in 2000 the voters granted themselves the power to “decide on the fate of any new construction on the city’s borders” and “they also took on the responsibility to help plan the city’s long-term future. We are all urban planners now.”

It will be left to another day to debate again the wisdom of that arrangement, but the arrangement is here.

The editorial continues: “THE DANCE has been worked out; in exchange for being allowed to go forward with the project, the developer offers a package of financial incentives, infrastructure improvements and environmental innovations to incentivize Davis voters to approve the deal. In that sense, Measure J and its successors (Measure R in 2010, Measure D in 2020) performed as expected; every proposal since then has been chock-full of innovative, forward-thinking ideas.

“The developers backing DiSC and Measure H aim to provide much-needed research and innovation space to businesses emerging from UC Davis, thousands of local jobs to graduates and other Davis residents, and increase the city’s housing supply,” they write. “The project would bring 1.34 million square feet of business and innovation space — 550,000 of research, office and R&D; 550,000 for manufacturing; 160,000 of hotel and conference space and 80,000 of ancillary retail — as well as 460 residential units. Those numbers represent a 60-49% reduction from the numbers proposed two years ago, when the DISC proposal failed on the ballot.”

Strong points raised by the editorial.

First, “That we’ve been dealing with a brain drain for years is self-evident.”  Solid point here noting that biotech companies have been going to Vacaville where there is space to “leverage their proximity to UC Davis in order to attract high-paying companies.”

The editorial perhaps should have added a note about the companies that Davis has lost in recent years (AgraQuest), companies that are relocating their headquarters (Marrone Bio Innovations) and companies we could lose (Schilling Robotics), among others.  Not to mention companies that should have moved here but didn’t (Genentech).

Second, they note the city’s “funding gap” and say “don’t call it a deficit” – an underreported story by the Enterprise, but well stated here as they note, it “won’t be solved without a new infusion of revenue.”  They write, “We complain about crumbling roads, weed abatement and traffic, and the only real hope of addressing things like this is the extra funding that a new business park would provide.”

They also make a strong point on traffic, noting, “While poor urban planning brought the issue to a head, it is driven by cars passing through Davis, not cars in Davis. Waze and other traffic apps push freeway traffic through our streets, and our infrastructure, and we have been reactive rather than proactive in dealing with the problem. It’s true that DiSC will bring more cars, but more cars are coming anyway — Waze will see to that.”

They double down on the point by adding, “Our only way to deal with it is through the revenue and mitigation measures that DiSC offers — including a ‘transit plaza’ along Mace, land to create an express bus lane and other future needs, and a Transportation Demand Management Plan —  there is no other source of help on the horizon.”

Solid response there.  You could argue that the freeway expansion project might alleviate some of the problems.  But ultimately Davis is going to have to accept that there are places that will have heavy traffic during commute times and adjust accordingly, and that projects like DiSC probably aren’t going to make things much worse if at all.

Finally they address the environmental issue.  They write, “DiSC offers a chance to look beyond the carbon-neutrality paradigm and toward embracing vehicle miles traveled as a goal for reducing emissions. By becoming less of a commuter town, and giving in-town work opportunities to Davis residents, we reduce the amount of time and distance Davis residents spend on the road.”

Solid point.  They might have added the safeguards to carbon footprint locked into the baseline features.

They do add, “Even though it’s substantially smaller than the previous DiSC proposal, this is still a large enough project to have a real, positive impact on Davis’ financial situation.”

They finally hit the housing issue: “It has a good mix of housing, with options for first-time buyers, affordable housing and community features like a pool  (and even a fencing facility).”

Housing figures to be a major concern again.  Might have fleshed out that point a little more.

Our assessment of the editorial: it hits most of the key points.  Won’t move the needle overall because of the Enterprise’s constant support for development, but that is what it is.

Share:
Tags:Davis EnterpriseDISC-2022Measure H
Previous : Sunday Commentary: Chronicle Support a Shot in the Arm, but Maybe Not a Game Changer For Boudin
Next : California’s Four-Day Workweek May Be on the Way