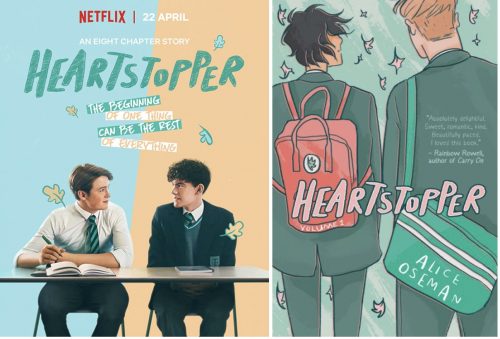 If you still haven’t seen Heartstopper… quite frankly, what are you doing?

The coming-of-age Netflix show was released over a month ago now, and was an immediate hit. I binged it in a weekend, easily enough considering the episodes are each only half an hour long.

Developed from a web-comic turned graphic novel created by Alice Oseman, the eight-episode series follows Charlie Spring, a Year 10 boy who was outed as gay during the previous school year. Charlie’s adorable crush on Nick Nelson—Year 11, definite jock, presumably straight—prompts the major plot of the show, as Charlie’s friends rally around him in the hopes he can avoid being crushed by his crush.

The show is simply a delight to watch. Charlie and Nick’s romance is adorable, reminiscent of teenage crushes from stomach butterflies to sitting next to each other in class. Charlie’s friends Tao, Elle, and Isaac are the perfect supporting characters, ranging from encouraging to defensive depending on the situation. They are multidimensional characters with subplots of their own, notably Elle’s post-transition adjustment to a new school for girls.

The design of the show is my favorite part of it. Netflix maintained the comic feel in development, frequently featuring animated elements that parallel the doodled aspects seen in the story’s original form. Cartoon hearts, leaves, and stars appear at “moments of high emotion… to portray the aesthetic of Heartstopper” explained Oseman.

The show watches like a comic book reads; its delivery is lighthearted and enjoyable, even though it focuses on some serious issues ranging from school bullying to discovering your sexuality.

The LGBTQIA+ series provides a range of representation, significant for the age of the characters. Younger viewers who are also struggling with figuring themselves out will find comfort in, both, the various terms the protagonists identify with freely, and the moments where they struggle.

A big part of the show addresses how difficult the process of finding yourself can be, especially at an age where you’re also balancing school, friends, and more. This is one aspect of the show that is incredibly valuable; it’s really great to know what a comfort this show will be to people going through just what the plot tackles, and in such a positive way.

It’s no doubt that Heartstopper was an immediate hit, as the list of what it has to offer is never-ending. Fans loved the music in the show, resulting in major streaming for the artists featured. Spotify even has an official Heartstopper soundtrack available for listening, due to such a positive response.

From Oseman’s cameo on a train ride to the cast’s Twitter presences, it’s clear that those involved with it had fun with this one, as they should.

Oseman wrote the script for the show and did a great job adapting the storyline. Side by side shots of comic panels and screencaps from the show illustrate how much effort was put into maintaining—not only the feel of the original storyline—but the recreation of actual scenes. Dialogue was at times verbatim, and the alternating angles even follow the comics, adding to the overall vibe.

I was curious to learn that some aspects of the show were introduced alongside this new format, namely additional characters, missing minor characters, and fluctuating screen time dedicated to subplots distinct from the graphic novels. As this first season only captures the beginning of Charlie and Nick’s relationship, it remains to be seen what else is yet to come.

Previously unfamiliar with Heartstopper in any form, I was interested to learn that the protagonists, Charlie and Nick, were not Oseman’s first creations. Tori, Charlie’s sister, was the star of Oseman’s first comic, Solitaire. While I’m curious to learn more of Tori’s story, I’m definitely glad that Netflix decided to share Charlie and Nick with us.

Fear not, Seasons 2 and 3 of Heartstopper were confirmed on May 20.

In the meantime, I encourage you to check out Oseman’s graphic novels to read Charlie and Nick’s love story for yourself; I know they’re at the top of my TBR pile.