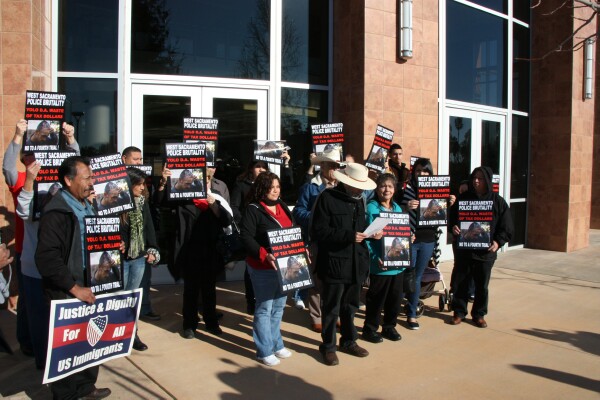 It was supposed to be a press conference and rally that asked District Attorney Jeff Reisig to drop the charges against Ernesto and Fermin Galvan.  However, late Tuesday afternoon the District Attorney’s Office announced that there would not be a fourth trial against the brothers, accused of resisting arrest and battery against several West Sacramento police officers in the early morning hours of June 14, 2005.

Instead, the group of twenty activists were seeking answers and a restoration of trust as they gathered on a cold morning in front of West Sacramento City Hall.

“We believe that there’s serious questions that we need to ask in relationship to the cost to the taxpayers with three court trials,” said Al Rojas, a labor activist and one of the organizers of the Wednesday press conference.

He added, “There needs to be a thorough investigation of the whole question of the Galvan trial which had a brutal beating and why Jeff Reisig went to the extent to convict and charge these individuals when he couldn’t prove it in the end.”

The press conference also featured Frances Flores, who was the lone juror to hold out in the first trial.  She stood her ground, in the face of severe criticism and scorn from her fellow jurors, whom she thought seemed more interested in getting home for Thanksgiving than giving the case serious consideration.

“I am extremely elated that court proceedings are over for the Galvan brothers. I truly believe the fact that the brothers were minorities that was the main reason for such cruel treatment and judgment,” Ms. Flores said.

She described the court process as both “excruciating” as well as “very emotional.” 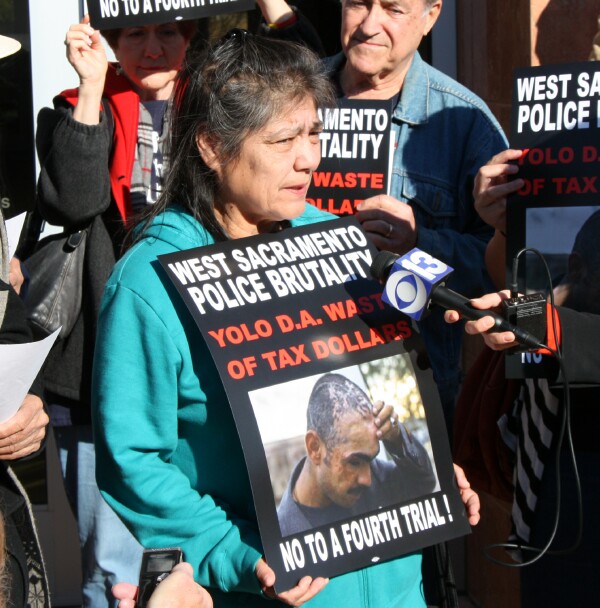 “There were a lot of [jurors] wanting to convict at a very early part of the deliberations,” she said.

Back in February, Jeff Austin was the lone hold out in the other 11-1 vote in favor of conviction, in the second trial.

“I was very happy to hear that the DA has decided to dismiss charges against the Galvan brothers,” Jeff Austin told the Vanguard this morning.

“As a juror in the second trial, I was concerned about the conflicting testimonies and that the evidence presented did not corroborate the stories told by the officers. This left me with a lot of doubts about the officers’ testimonies about what happened that night,” he continued.

“I felt very strongly that we could not convict because of that and I am glad I held to that decision,” he said. “Quite often we hear that one person cannot make a difference but in this case, having one lone dissenter who held to his/her beliefs in the first trial, resulted in the second trial.”

“And my doing the same in the second trial led the way to the third trial, and then ultimate acquittal. I am proud to have been part of the process and pleased that my actions ultimately influenced the outcome of the cases and the lives of the Galvan brothers. I am very sorry for all of the suffering the Galvan brothers have encountered because of this event and wish them all the best,” Mr. Austin concluded.

He expressed similar frustrations, as Ms. Flores did, about the attitudes of some jurors.

“My frustration was that several had already made up their minds as to the defendants being guilty and stated that nothing anyone else said would change their minds,” Mr. Austin, a Davis resident, wrote on the Vanguard in February.  “When I tried to point out inconsistencies, medical evidence/testimony etc that raised doubt in my mind, they were unwilling to even consider the possibility that my points had merit or that they were worth looking into further.”

“One of the jurors was very angry at me for not agreeing with the group and for thus wasting two weeks of his life because this was ending without a guilty verdict,” he continued.

However, he did note, “Several of the other jurors said they respected my convictions and for standing my ground even if they didn’t agree with me.”

“Ultimately, this came down to whether I was convinced beyond a reasonable doubt of the defendants’ guilt. I was not and thus could not in good conscience render a guilty verdict,” he concluded.

Without the actions of Frances Flores and Jeff Austin, in the face of strong pressure from their fellow members of the jury, the truth may not have come out in the case.  As time went on, the inconsistencies in the stories of the officers grew more pronounced.

This morning’s Sacramento Bee commended DA Jeff Reisig for doing the right thing, but criticized him for taking so long to do it.

“Finally, Yolo County District Attorney Jeff Reisig has thrown in the towel. He’s elected not to try Ernesto and Fermin Galvan a fourth time on charges of resisting arrest and battery on police officers. It took far too long, but ultimately it was the right decision,” the Bee’s editorial staff writes.

As they recount the facts of the case, one of the key points that arises is the disparity in the magnitude of injuries.  The officers maintained that they feared for their lives, and that Ernesto Galvan was under the influence of drugs and exhibiting “superhuman strength.”

And yet, as the Bee editorial points out, “Undisputed is the fact that Ernesto Galvan suffered a cracked skull, fractured face and permanent brain damage  in that early morning confrontation. He was in a coma for 1 1/2 months. His brother was beaten unconscious and lost several teeth. Officers suffered minor scrapes and bruises.”

They write, “Reisig still insists the Galvan brothers are guilty, but after five years and three hung juries he no longer believes his office can get a unanimous verdict, thus his grudging decision to drop the charges.” 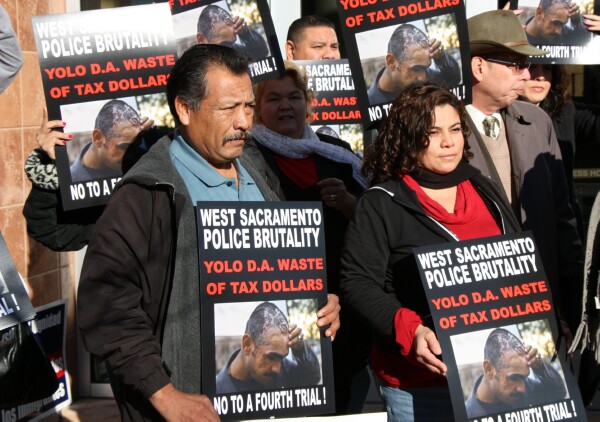 Their criticism is biting.

“In defending his overzealous but ultimately unsuccessful prosecution, Reisig ignores the obvious – the seriousness of the Galvan brothers’ injuries and the fact that there was no evidence whatsoever that the brothers were doing anything illegal the morning they encountered police,” they write.

They also note Public Defender Tracie Olson’s assessment, “No one expects for a citizen who is not committing a crime to have an interaction with police officers and leave it that horribly injured. That was hard for the district attorney to overcome.”

The DA can point out that 22 of the first 24 jurors voted to convict, but they could never get over that hurdle and as more evidence comes forth and the police continue to contradict themselves, it becomes more apparent that the police are simply lying in this case.

As the Bee notes, “Attorneys for the Galvans say not only are the brothers innocent of resisting arrest but they were victims of a gross overreaction by police.”

Wednesday at the rally, this case clearly touched a nerve.

“Jeff Reisig’s decision to carry on these lengthy (three) court trials are subject to question as to the enormous Taxpayers financial burden and costs at a time where Yolo County is in a 22-million budget deficit” the release continued.

“It is incumbent upon all prosecuting attorneys to maintain a quasi-judicial role in such matters,” Mr. Palik continued.  “They are not ordinary attorneys and they have a clear responsibility to the public to act with due diligence in ascertaining all the facts and verifying their consistency.”

Mr. Palik said, “I, personally, was very concerned during the third trial when one of the police officers claimed Mr. Ernesto Galvan was still wearing his boots at the time he was in restraints, and that being kicked by Mr. Galvan with his boots was the only way that officer could have torn his trousers during that incident.”

He continued, “This was especially concerning since the three officers who were actually involved in the altercation claimed steadfastly, through three trials, that Ernesto had kicked off his boots and took a barefoot ‘fighting stance’ prior to being subdued by the officers’ batons.”

Mr. Palik once again alluded to the fact that there was additional evidence that would have been introduced in the fourth trial.

He said, “We have our own theory as to what actually occurred, but that is a matter of attorney-client privilege and I am not at liberty to discuss it due to the pending civil lawsuit.”

According to the DA’s Office’s version of events, on June 14, 2005, at approximately 3:33am, Officer Schlie of the West Sacramento Police Department noticed a car parked on Riverbank Road in West Sacramento.

Ernesto Galvan failed to comply with his requests and Officer Schlie grabbed him by the wrist.

Ernesto Galvan pulled away, swung around and struck Officer Schlie in the chin.  Galvan fought Officer Schlie and another officer for nearly four minutes.  Officers were unable to stop the onslaught of kicks and punches from Ernesto Galvan. During this struggle, the officers attempted to gain control and compliance from Ernesto by verbal commands, take-down techniques, the Taser and the use of batons.

The DA’s version continues, stating that it was not until the officers used their batons that Ernesto Galvan stopped fighting.

Ernesto Galvan was charged with felony resisting arrest and obstructing Officers Schlie and Farrington by threats and violence, and misdemeanor battery on the same two police officers.  Fermin Galvan was charged with misdemeanor resisting arrest and obstruction by threats and violence against Officer Reeder, and misdemeanor obstructing/delaying of Officer Schlie, who was struggling with his brother.

In our view, evidence that came out during the third trial, as well as the second trial, clearly contradicts this reading of events.  Ultimately, we agree with the DA that this case was not winnable for them.  However, we differ in that we believe that the officer’s stories were becoming more and more contradictory as time went on.