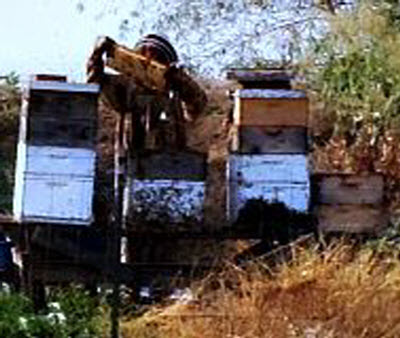 “If the bee disappeared off the surface of the globe then man would only have four years of life left.” This quote is often attributed to Albert Einstein and, while there is scant evidence that he did indeed say this, there is, according to entomologists today, even less evidence that the quote is completely true. Some say that there would be a higher level of starvation, but humans would continue to survive. Just not at the same level as today. That’s actually saying a lot. So it would seem that the better question to pose is not will humanity die if the bees die, but what would the quality of life be like for humans?

To the extent that a diverse food supply is in high regard and produced with little damage to the natural environment the bees and other pollinators do, without a doubt, have a strong role in the quality of life for humans. More than 70% of the fruits and vegetables grown for human consumption need pollinators to produce, and without them the plants would not survive. Honey bees, the nation’s pollinating workhorses, can’t do it alone. Scientists have shown that “in more than 40 important crops grown worldwide, wild pollinators improved pollination efficiency, increasing fruit set by twice that facilitated by honeybees.” Indeed, without native pollinators we would be hard pressed to continue producing food at our current rate and at current prices.

Today’s honey bee is essentially a farmed animal and, as such, is protected by those who farm them and those who use them (other farmers). The threats to the honey bee; the varroa mite, colony collapse disorder (CCD), pesticides and climate change, are real and should concern all of us, however it is the native bees and other native pollinators that also deserve serious concern and protection, for they are currently going it alone and they are not doing well. The farmed honey bee is a supplemental pollinator to our crops, not the other way around. Yields are increased just around 14% when honey bees are invited to the field. Not an insignificant increase but one has to ask about the portion that the honey bees don’t contribute to.

Enter the native pollinators. Tomatoes, long considered self pollinating, show an increased yield when grown near native bee’s natural habitat. Since the honey bee is too small to pollinate a tomato flower it makes sense that the larger bumble bee is needed to tackle the job. These bees are disappearing at an alarming rate and other pollinators are following that same dire path. Causes of the pollinators’ rapid demise range from the loss of flower meadows, forests, and other habitats to climate change, heavy pesticide use and unsustainable agricultural and landscape management practices that have created a worldwide decline. (Think of those perfect lawns with large flower beds and row upon row of the same crop in a field, no diversity there, no place for them live). Looking at the native bee population over the last 100 years, scientists have shown a serious decline of 50% of the native bee species from the midwestern United States, with four species of bumblebees declining 94% and three species of bumblebee that are already extinct. “Known only from southern Oregon and northern California between the Coast and Sierra-Cascade Ranges, Franklin’s bumble bee has the most restricted range of any bumble bee in the world,” and it too is on the verge of extinction.

Consider for a moment how the plants that we hold dear, almonds, blueberries, raspberries, apples and pears, along with broccoli, collards, cauliflower, cucurbits (cucumber, cantaloupe, pumpkins and watermelon), okra, peppers and squash, to name just a few, would be pollinated should the natural pollinators go extinct. The Exerces Society for Invertebrate Conservation tells us that “pollinators are essential to our environment. The ecological service they provide is necessary for the reproduction of over 85% of the world’s flowering plants, including more than two-thirds of the world’s crop species. The United States alone grows more than 100 crops that either need or benefit from pollinators, and the economic value of these native pollinators is estimated at $3 billion per year in the U.S. Beyond agriculture, pollinators are keystone species in most terrestrial ecosystems. Fruits and seeds derived from insect pollination are a major part of the diet of approximately 25% of all birds, and of mammals ranging from red-backed voles to grizzly bears. In many places, the essential service of pollination is at risk from habitat loss, pesticide use, and introduced diseases.”

They are referring to an incredibly large portion of our natural and agricultural world. Think about it seriously, from flowers to squash to birds to grizzly bears, all dependent on pollinators for survival, gives new meaning to the term “trickle down theory” – as humans are the cause of most of the problems that pollinators are experiencing. This could be the next “canary in the coal mine.” The warning signs are all in.

Without pollinators, what can be done to grow the plants that depend on them? Let us postulate that this country would be forced to manually pollinate the plants – what would that cost look like compared to the current costs? Can you say billions and billions? Of course, the supply of those same fruits and vegetables would be incredibly low compared to what we are growing today. Then what would that same set of fruits and vegetables cost at the grocery store? You can bet that the average American would not be able to purchase them on a regular basis. The poverty stricken would not be able to purchase them at all.

One of the most dramatic real world examples of pollinator loss and the effects on agricultural crops comes from southwest China where the apple and pear orchards must be hand pollinated because the native bees have been eradicated by excessive pesticide use and the destruction of natural habitat. Dependent on the wild pollinators, the farmers have resorted to hand pollination because they cannot afford to purchase or lease honey bee hives. Small buckets of pollen are collected then delicately applied to each flower with a small paint brush. Small children climb to the highest branches to pollinate the flowers near the top of the trees. Other adaptation strategies adopted included the removal of apple trees and the planting of fruit trees that do not require cross pollination. And at what cost, as the apple is their most profitable crop.

China isn’t the only country experiencing pollinator loss. Pakistan, India and Nepal have also reported great losses and the UK has lost three species of native bumblebee. Six are on the endangered list and four species have gone extinct in the whole of Europe. Since the 1990’s the North American species have also been dramatically declining.

Threats to other pollinators continue to grow around the world. Hummingbirds, moths, bats, butterflies, beetles, flies and wasps are all under threat due to factors that threaten all biodiversity: habitat loss, pesticide use, pollution, and invasive species. We can all help. Contact local and national policy makers, government officials and tell them of your concern. If you own or rent land, grow plants that are pollinator friendly. You can get large quantities of conservation seed specific to pollinators needs by contacting Hedgerow Farms. They are local and they work with the Exerces Society to produce the right seeds for pollinators along with native grasses. Choose products that have been produced in a pollinator friendly manner. If you’re an educator, emphasize the importance of pollinators and the role they play in our environment. Do what you can to protect the pollinators.

I leave you with this from Dave Gouson’s book, A Sting in the Tale: My Adventures with Bumblebees.

“The mutualistic relationships between bees, the flowers that they pollinate, and the bacteria that live within the roots of those plants are at the heart of the functioning of a natural, species-rich meadow. The problem is that these relationships can be ruined by application of a sack of fertiliser, which allows the grasses to swamp the legumes and other wild flowers, swiftly resulting in a bright green, flowerless sward, with no legumes, no Rhizombium, and no bees. In the farming world this is known as “improved” grassland. In the 1940’s Britain had in the region 15 million acres of flower rich grasslands. It is hard to get precise figures, but about 250,000 acres remain; a staggering loss of over 98 percent. Fertilisers were cheap, and successive governments were keen to persuade farmers to boost productivity, so ecosystems that had taken hundreds of years to develop were subject to swift and wholesale destruction.”

Debra Chase is a self-taught traditional chef with over three decades of professional experience.  She currently resides in Colusa County on a small farm.