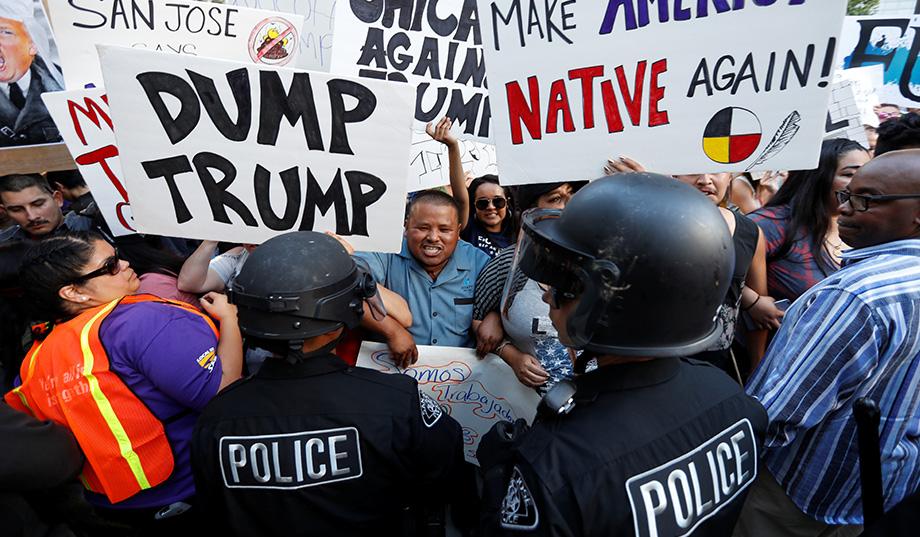 In many ways, I have never seen anything like this.  I was very young in 1980 when Ronald Reagan beat Jimmy Carter, and a dozen or so longtime Democratic Senators, many of them stalwarts of the opposition to Vietnam, lost.  I was in college in 1994 when the Republicans took back Congress – but, unlike this year, everyone kind of saw it coming, even if the magnitude was shocking.

In 2000, we were perplexed and bemused by the turn of events in Florida and the ultimate public recount and shutdown of process by the Supreme Court

Nothing compares to what happened on Tuesday.  Part of it, again, is that no one really saw it coming, believing – wrongly so in retrospect – in the accuracy of polling.  Part of it is the deep divide in the country where, at last check, the vote difference in the popular vote was only about 20,000 and only the contours of the nation and the Electoral College have pushed the column in one direction.

But this was a different campaign and this is a different candidate, and that has ramped up the anxiety.  The talk about building a wall and deportation has a lot of people on edge.

It started late on Tuesday/early on Wednesday when several hundred UC Davis students marched through campus and into downtown Davis, apparently protesting the election of Donald Trump.

Davis police reported that the students walked into the city, blocking some streets for a short time before heading back onto campus. They were not disruptive, however, according to police accounts.

As it turns out, UC Davis and Davis were not alone, as protests broke out across the nation – some of them blocking freeways and some burning flags.

While I understand the frustration – it seems to be a lot of “too little, too late.”  It is not clear their goal or even what they can do.

UC President Janet Napolitano issued a statement midday on Wednesday, “In light of yesterday’s election results, we know there is understandable consternation and uncertainty among members of the University of California community.  The University of California is proud of being a diverse and welcoming place for students, faculty, and staff with a wide range of backgrounds, experiences and perspectives.  Diversity is central to our mission.

“We remain absolutely committed to supporting all members of our community and adhering to UC’s Principles Against Intolerance.  As the Principles make clear, the University ‘strives to foster an environment in which all are included’ and ‘all are given an equal opportunity to learn and explore.’  The University of California will continue to pursue and protect these principles now and in the future, and urges our students, faculty, staff, and all others associated with the University to do so as well.”

Later in the day, Interim Chancellor Hexter and Vice Chancellor de la Torre said, “We have heard from a number of individuals in our campus community who are concerned about the results of yesterday’s U.S. election and potential outcomes. In addition to reiterating our campus’s commitment to access and inclusion, we write to remind you that caring staff are ready to support you.”

Some are mocking this stuff.  But put that on pause for a second.  This isn’t just about losing an election for some.  I know at least one person who, I was told, tried to take their life – not sure about the exact circumstance here.

My kids were distraught at the beginning of the day.  As it turns out, they were not alone.  They would watch Trump give speeches, and were very troubled by his tenor.  He was unsettling to them.  This was above and beyond whatever cues were picked up.

But throughout the day, what I heard were that people in various communities were experiencing high anxiety.  Many people who live here legally are the children of immigrants.  Even those whose parents are legal immigrants are clearly on edge.

One of our 13-year-old’s friend’s family is leaving.  Others are packing and going to wait things out to see what happens.  Naturally, that situation is completely unnerving not just to the people involved but also to their friends.

Where my younger kids go to school at Montgomery, the situation was tense and we heard bits and pieces through the eyes of a six-year-old and five-year-old – but what we heard was very disturbing.  Kids not knowing where they are going or what is going to happen.

I think capturing this anxiety was Lorena Gonzalez, the Assemblymember who crafted and pushed through landmark legislation this year.  She posted on Facebook: “I’m so grateful to be heading to re-election with over 72% of the vote. Nonetheless, my heart is breaking tonight for every 3rd -8th grader I’ve spoken with in my district over the past year, assuring them we can beat Donald Trump… that their parents wouldn’t face deportation…my fingers are crossed, but I am so afraid for my district.”

I talked to candidates across our area and that was the overwhelming sentiment.  Those who won were grateful, but concerned about the national picture.  Those who were defeated were more distraught about what happened nationally than locally.

It is not just the Hispanic Community that is on edge.  The Arab-American organization CAIR (Council on American-Islamic Relations) put out a note that suggested that anti-Islamic and anti-Muslim sentiment had increased markedly in the past year and the concerns of the Muslim community have increased.

Donald Trump on Tuesday said he wanted to be a president for all Americans, but clearly large groups of Americans are distrustful of that.

Some have suggested we calm down, the sky is not falling, the sun will rise in the morning – while true, people’s lives are in the balance, either directly or indirectly, and no one knows what is going to happen.  Anxiety is understandable.

155 thoughts on “Commentary: Deep in the Heart of Blue Country… The Reaction”