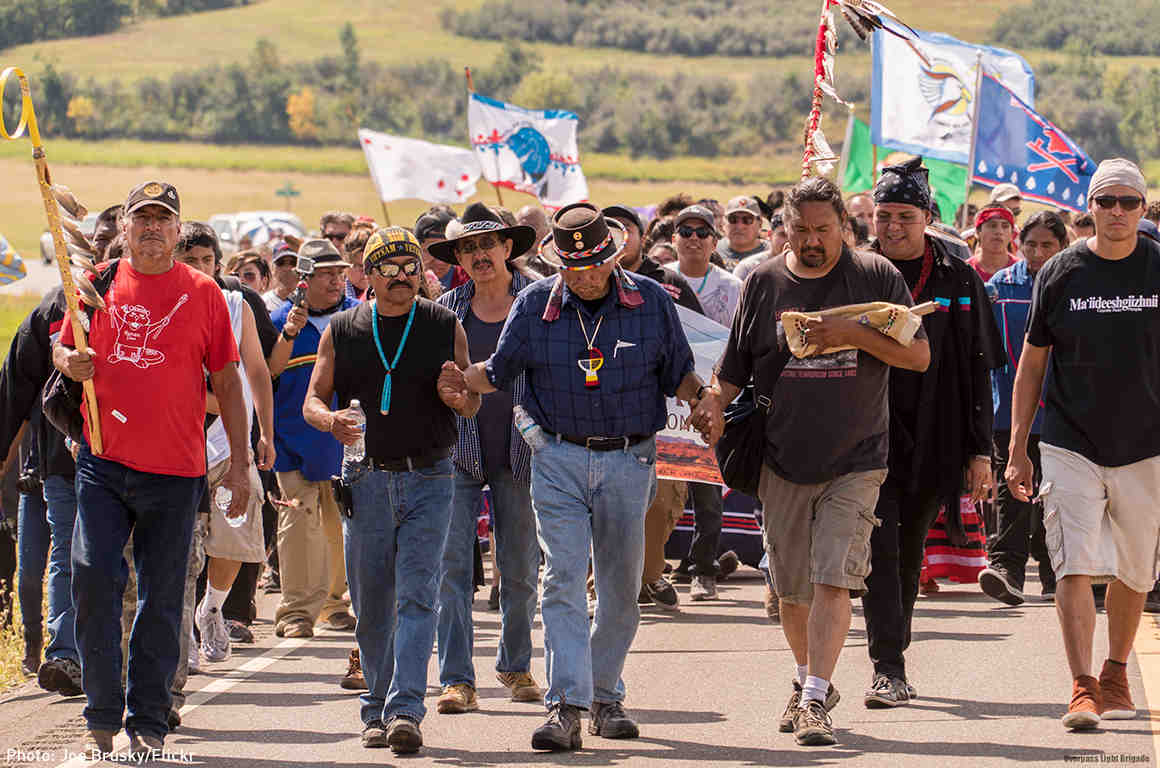 During my week-long visit to Standing Rock in January 2017, I listened to many water protectors speak about the shady tactics used against them by private security contractors and local law enforcement to undermine their protests against the Dakota Access Pipeline.

I heard stories about DAPL security companies trying to infiltrate protest camps and instigate rifts between activists. I heard about organizers being followed and indigenous activists seeing planes, helicopters, and drones above their camp, surveilling their protests and recording their movements and activities at all hours.

I heard indigenous people describing their home being turned into a war zone. Local law enforcement agencies, led by the Morton County Sheriff’s Department, aggressively deployed militarized gear and weapons — designed for use in war — to intimidate peaceful protesters and violently crack down on a historic indigenous-led movement.

Now, these stories and testimonies have been confirmed by newly released documents, some of which were leaked to the press by a contractor from TigerSwan — the security agency hired by the pipeline company, Energy Transfer Partners — to suppress the protests.

TigerSwan operates worldwide and specializes in armed conflict zones. According to the new revelations, the company utilized militaristic counterterrorism tactics against anti-DAPL protests not just in North Dakota but in several other states as well, including South Dakota, Illinois, Iowa, and Texas. The documents reveal a security force whose theories are as Islamophobic as they are absurd: In just two examples, TigerSwan compares water protectors to insurgents and “jihadists” and references a “strong female Shia following.” One leaked communication notes “the presence of additional Palestinians in the camp,” and it says that “the movement’s involvement with Islamic individuals is a dynamic that requires further examination.”

The militarization of American policing has long been a problem, even before the protests in Ferguson when the issue captured national headlines. In these documents, we see irrefutable evidence of the deployment of private military contractors to suppress legitimate and peaceful protests and activities. While the new documents may not provide enough detail to determine whether TigerSwan has crossed the line of illegality, its operations and reports are ominous and should deeply trouble all Americans.

The First Amendment’s guarantee of the “right of the people peaceably to assemble” cannot be reconciled with private military contractors deploying against peaceful protesters on domestic soil with little or no oversight or accountability. Their collaboration with federal, state, and local governments requires a credible and independent investigation.

Unfortunately, the current Department of Justice and Civil Rights Division, under the direction of Attorney General Jeff Sessions, has demonstrated a deep hostility towards police accountability and reform. Even the limited actions taken by the Obama administration to curtail the militarization of American policing are in real jeopardy. A May 2015 report by The President’s Task Force on 21st Century Policing concluded that:

Law enforcement agencies should create policies and procedures for policing mass demonstrations that employ a continuum of managed tactical resources that are designed to minimize the appearance of a military operation and avoid using provocative tactics and equipment that undermine civilian trust.

That month, a federal interagency working group issued recommendations to demilitarize state and local law enforcement pursuant to President Obama’s Executive Order 13688. The working group called for a prohibition of state and local law enforcement agencies from acquiring certain offensive military equipment, like tanks and bayonets. It put policies in place that governed the use of things like drones and mine resistant ambush protected vehicles (MRAPs). With Jeff Sessions not wanting the federal government “dictating to local police how to do their jobs,” it’s likely these policies will be soon be eliminated.

The militarization of American policing has also been internationally condemned by human rights bodies. Next week in Geneva, the U.N. special rapporteur on the rights to freedom of peaceful assembly and of association will present a report on his 2016 visit to the United States, which harshly criticizes the militarized response of police to legitimate protests:

The Special Rapporteur is also concerned that it has become commonplace for police to respond to peaceful demonstrations with military-style tactics, full body armour, and an arsenal of weaponry suited more to a battlefield than a protest. While the Special Rapporteur is sensitive to police concerns that they must be properly equipped to deal with potential unlawful activity, he is convinced that the widespread militarization of police needlessly escalates tensions and provokes equally aggressive reactions. Protesters are not war enemies and should never be treated as such. It is ill advised to use military equipment to manage activities so fundamental to democratic societies.

The proliferation of militarized policing and the use of private security and military contractors since 9/11 and in the wake of U.S. wars overseas have disproportionately impacted communities of color and indigenous peoples, as we have witnessed in Ferguson, Baltimore, Baton Rouge, and Standing Rock. But these new revelations on the deployment of private security contractors — mercenaries, essentially — to suppress peaceful assemblies and legitimate organizing are especially concerning. They should make us all concerned about the future of militarized and private policing and the serious threats they present to our most fundamental freedoms and human rights.

Jamil Dakwar is Director of the ACLU Human Rights Program