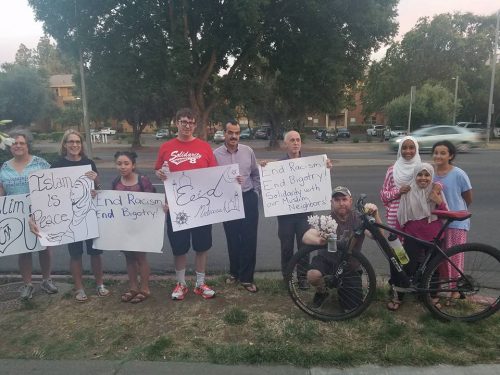 The Muslims in the Davis community were once again this weekend victims of a hate attack, as someone tore up the Muslim Holy Book, the Quran, scattering its pieces all over the street and in front of the Islamic Center of Davis.

To add insult to injury, this was done just as Ramadan was wrapping up.

Some undoubtedly will see a connection to the sentencing of Lauren Kirk-Coehlo who desecrated the Islamic Center in January, breaking windows and hanging bacon on the door knobs.  Last week she received five years of probation – a sentence that some complained was far too lenient.

But I tend to discount that connection here.  After all, this crime will be difficult if not impossible to catch the culprit.  In addition, there was a similar incident in Sacramento this weekend, where someone burned the Quran and attached it with handcuffs to a chain link fence in the parking lot of a Sacramento County Sheriff’s Department service center.

The department office is a direct neighbor of the Masjid Annur Islamic Center, located in South Sacramento.

Instead of pointing the finger at the efforts of Judge Dan Maguire to weigh the appropriate punishment and factor in the need to deter and the need to the protect the community in the Kirk-Coehlo case, we ought to instead look at the national climate as a guideline.

In mid-February, the Southern Poverty Law Center found, “The number of hate groups in the United States rose for a second year in a row in 2016 as the radical right was energized by the candidacy of Donald Trump.”

They found the most dramatic growth “was the near-tripling of anti-Muslim hate groups – from 34 in 2015 to 101 last year.”

They write, “The growth has been accompanied by a rash of crimes targeting Muslims, including an arson that destroyed a mosque in Victoria, Texas, just hours after the Trump administration announced an executive order suspending travel from some predominantly Muslim countries. The latest FBI statistics show that hate crimes against Muslims grew by 67 percent in 2015, the year in which Trump launched his campaign.”

Islamic leaders have criticized the White House for failing to pushback against anti-Islamic bias.

In February, Corey Saylor, a leader for CAIR (Council on American-Islamic Relations), an Islamic Civil Rights organization, said that the group “is waiting on Trump to speak out, after a significant rise in anti-Muslim incidents over the past year.

“It is [Trump’s] duty to repudiate bias. President Bush went to a mosque to push back against anti-Islam sentiment in 2001,” Mr. Saylor told the media in a February email. “We are still waiting for

In May, two men on a train were stabbed to death and a third critically injured as they intervened to protect two Muslim teens that a man was harassing.

It took several days, but President Trump finally spoke out.

“The violent attacks in Portland on Friday are unacceptable. The victims were standing up to hate and intolerance. Our prayers are w/them,” President Trump tweeted on the Monday, three days later.

The president meanwhile continues to defend the Muslim ban.  In early June, he referred to his executive order on immigration as a “travel ban” and said his Justice Department should not have submitted a “watered down, politically correct version” to the Supreme Court.

The order, which temporarily restricts travel to the US from several Muslim-majority countries and was according to Mr. Trump “watered down” due to to political correctness, could hamper his administration’s legal argument that the executive order did not target Muslims.

As a candidate, Mr. Trump called for a “total and complete shutdown” of Muslim immigration to the United States.

In trying to defend the order, Justice Department lawyers have gone to great lengths to avoid calling it a “travel ban” in court, referring to it as a “temporary pause” or simply “the executive order.”

Meanwhile, last week there was a report in ProPublica that “scores of federal law enforcement agencies are failing to submit statistics to the FBI’s national hate crimes database,” this “in violation of a longstanding legal mandate.”

They write, “The lack of participation by federal law enforcement represents a significant and largely unknown flaw in the database, which is supposed to be the nation’s most comprehensive source of information on hate crimes.”

“We truly don’t understand what’s happening with crime in the U.S. without the federal component,” said Amy Blasher, a unit chief at the CJIS (Criminal Justice Information Services) division, an arm of the bureau that is overseeing the modernization of its information systems.

ProPublica notes that “it’s long been clear that hundreds of local police departments don’t send data to the FBI, and so given the added lack of participation by federal law enforcement, the true numbers for 2015 are likely to be significantly higher.”

Given the national discourse as a backdrop, it should be no surprise that incidents like the one perpetrated by Ms. Kirk-Coehlo will occur.  She wrote of having “dreams and aspirations” of killing people, “I would like to kill.. many people.”

It wasn’t just Muslims either – she “made derogatory remarks using the terms ‘Jews, Mexicans and (N—–s)’ on a regular basis,” according to declarations from the police.

The inflamed rhetoric has an impact – particularly on people already potentially suffering from mental illness or on the fringes of society.

The latest incident has clearly continued to shatter the nerves and sensibilities of the Islamic community.

In the meantime, the Davis community continues to step forward.  Back in January, as many as 1000 people joined the Muslim community in prayer on a Friday afternoon in solidarity.  This week, it was reported “we had a small but great event last night.”

Community support has enabled the Islamic community to press on in the face of challenges.