The biggest challenge that the city will face in the coming years is figuring how to on the one hand pay for infrastructure needs, while on the other hand address a growing unfunded liability on retirement benefits to employees.

The report concludes, “The average annual shortfall in funding is $7.8 million.”  To put this into perspective, “this amount is roughly equivalent to the current 1% Measure O sales tax, or to a 6.0% utility users tax on power, communications and water/sewer/sanitation services, or to a $270 parcel tax.”

And this is still a low number, as the park maintenance cost remains a work in progress.

This past Monday, the city’s Finance and Budget  Commission analyzed the current year’s budget and, while it found that in general “the proposed 2017-18 budget reflects continued improvement in the city’s fiscal stability, some modest new programmatic and capital outlay spending initiatives, and continued increases in costs for employee compensation and maintenance of infrastructure,” there are some concerns.

For instance, “While the budget projections of improved property and sales tax revenues in 2017-18 are supported by local, regional and statewide data and are generally consistent with projections by other agencies, the combination of those projected revenues and the projected expenditures in the budget forecast are not sustainable either in the immediate future or in the long-term.

“The 20-year projection contained in the budget package is a big step forward in more fully informing Davis citizens about the formidable fiscal challenges the city faces,” the commission concludes. “The new projection also gives the City of Davis a sound analytical basis for developing and adopting a comprehensive strategy to address the average annual $7.8 million funding gap it identifies.”

For example, “The City Council could set broad targets giving city staff direction as to what share of the $7.8 million funding gap should be addressed in the coming years by efficiencies in city operations, what share by tax rate changes, and what share by new tax revenues generated by economic development, leveraging of city assets, and other actions.

“We propose this comprehensive financial strategy be adopted in concert with forthcoming council consideration of a June 2018 parcel tax renewal package.”

The commission also recommends “implementation of the full 10 percent gross receipts tax rate authorized under the Proposition C cannabis tax unless rigorous economic analysis demonstrates that a different tax rate would maximize tax revenues.”  They add, “We further recommend that the revenue be allocated in the budget to general support of existing city programs.”

On the downside, “The proposed 2017-18 spending plan lacks the resources to fully address basic infrastructure maintenance needs, including roads and bike paths and parks.”

As such, the commission concludes, “The City Council may wish to consider a ‘fix it first’ strategy to modify the budget plan to make greater progress in this important work.”

It could do so by:

(a) Deferring some of the new General Fund spending proposals contained in the draft budget;

(b) Making technical funding adjustments in some budget proposals; and

(c) Reconsidering some past funding commitments.

“The monies freed up through these actions could be devoted to deferred maintenance and infrastructure repair projects, such as accelerating the $5.6 million traffic signals upgrade project that lacks any funding source after a 2017-18 start with $500,000,” the commission suggests.

They come up with a table that outlines some potential actions they believe could generate $8.6 million for such purposes this coming fiscal year.

However, “Because these options are largely one-time in nature, they will not provide a permanent fix to the funding gaps identified in the city’s long-range fiscal forecast. However, the council may wish to consider some of these actions as an interim solution now or when the council considers future budget adjustments.” 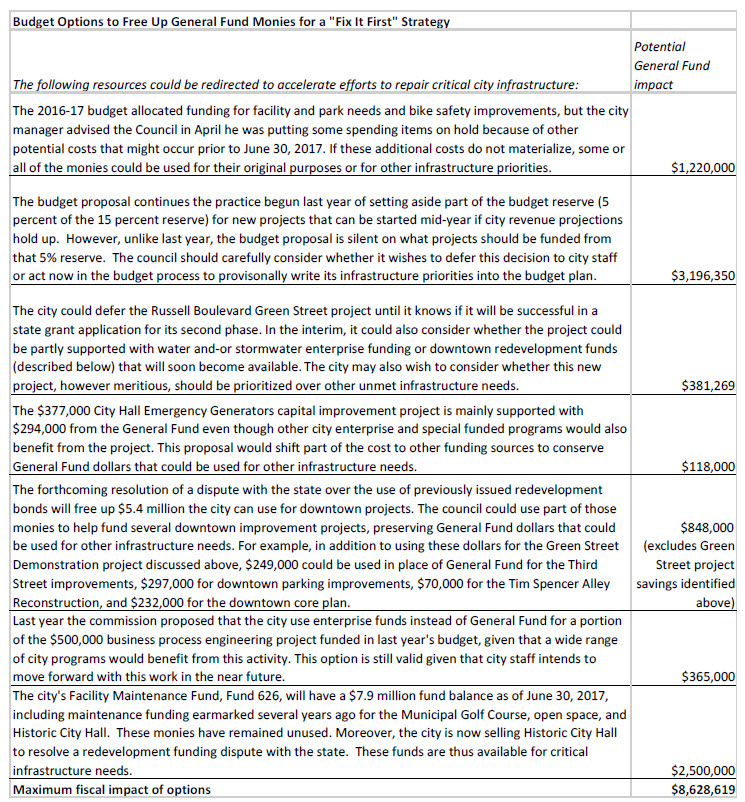 City Manager Dirk Brazil summarizes the situation in his transmittal letter to the city council.  “We continue to see stability in our revenue streams, with notable growth in property and sales tax,” he writes.  “Although revenue is currently stable, the City’s expenditure obligations continue to grow. CalPERS announced a change to its pension discount rate over the next three years, effectively increasing the city’s annual pension obligations going forward. While the city continues to fully fund Other Post Employment Benefits (OPEB), also known as retiree medical, those costs will also continue to rise in coming years.”

He continues, “Outside studies show the city needs to commit up to $8.3 million annually toward transportation infrastructure to maintain a suitable pavement criteria index, compared to the $4.4 million proposed for the budget in 2017/18. Finally, the City is in various stages of negotiations with all employee bargaining units, creating some uncertainty related to the 2017/18 budget and beyond.”