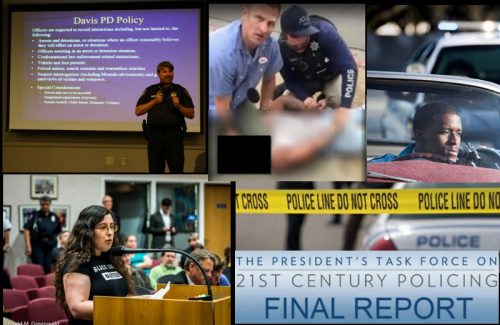 This year has seen the confluence of two events – the announced departure of the long-time police auditor, who informed staff back in February or March that he would not renew his contract.  Bob Aaronson has served in that capacity since late 2006.

At the same time, in April, the Picnic Day incident occurred, prompting many in the community to request the potential for stronger oversight in Davis in light of questions about what took place that day.

On Tuesday, the council will be asked whether they have an interest in changes to the existing system of police oversight and what types of oversight they might be interested in.

Back in 2006, staff notes that “following a few specific police interactions in the community, and significant community debate, the City adopted a three-pronged approach to community involvement and oversight of the police and the police department.”

The three structures were: the Police Ombudsman (now auditor), the Community Advisory Board (CAB), and Police Advisory Committee (PAC).  The city has since implemented an Alternative Conflict Resolution (ACR) Program.

Staff writes, “In 2005/2006, a few, mostly larger, communities employed some type of police ombudsman/police auditor position, either full time or on contract, to act as a point of contact for any member of the public who had a question about or concern with the police.”

The PAC was disbanded back in 2010, but “consisted of three individuals, appointed by the City Manager, who reviewed completed citizen complaint investigations.

“One member was a former police chief (Calvin Handy) and two members were attorneys (David Sandino and Joe Taylor). The primary role of the PAC was to review and evaluate all completely adjudicated citizen complaints against employees of the Davis Police Department.”

The CAB was re-formed in the fall of 2005 “to provide the Police Chief with face-to-face dialogue with community representatives. Initially 12 members of the community were selected. Over the first 12 months of operation, additional members were added to increase and diversify the representation.”

The group developed their own mission statement: “Using two way communications, improve relationships between the public and the police. To actively represent the community by articulating, advising and tracking community and police issues.”

In January 2015, the ACR Program was created following lengthy discussions from the police department and community members.

The program “is an informal, confidential mediation process based on two restorative practices: circle processes and non-violent communication. Through the ACR Program, community members with a specific complaint about an interaction with Davis Police employees, are invited to meet face-to-face with that/those Davis Police employee(s) with the assistance of a team of two trained Circle Co-Keepers, who are also members of the Davis community.

“The ACR Program allows the participants to safely explore, understand, and/or mutually resolve issues, with the objective of healing the conflict. This may result in agreement, or simply an agreement to disagree. Participants are not required to reach a formal resolution. The expectation however is that by ‘coming together in a good way,’ the relationship between the participants will be restored.”

The Davis Police Department adopted a strategic plan on April 1, 2017, that is “focused on oversight, transparency, accountability, diversity and reducing conflict.”

Additionally, the department published a new vision statement: “Davis Police Department will model and pursue excellence by partnering with our community; investing in our employees to maintain the highest level of professionalism; being a leader in procedural justice, enacting restorative practices, and embracing our role as guardians of the community.”

There are four basic types of police oversight models used in the U.S.

Staff writes: “Civilian oversight of police is not a one-size-fits-all proposition. Many communities create hybrid systems (Davis currently has a hybrid model). If hybrid models are used, all of the systems should be complementary rather than redundant. Importantly, every system has its strengths and weaknesses which should be thoroughly vetted before implementation.”

Mr. Aaronson’s contract concluded June 30, 2017, and the City is reportedly in the process of seeking another auditor. “The contract for the position is included in the FY 2017-18 budget. The contract has ranged from $50,000 to $65,000 per year for 19 to 28 hours of service a month in the past and it is estimated a future contract would be consistent with this range.”

Staff writes that “with the departure of the police auditor and the disbanding of the PAC, the City has an opportunity to re-examine and determine the future of police oversight in the City of Davis.”

Staff is looking for guidance from the council as to whether they want additional research or engagement with a consultant, and whether they wish to set a process for making changes or to adopt a new system or model.

View the video to see the Vanguard‘s June 28 discussion of Police Oversight: