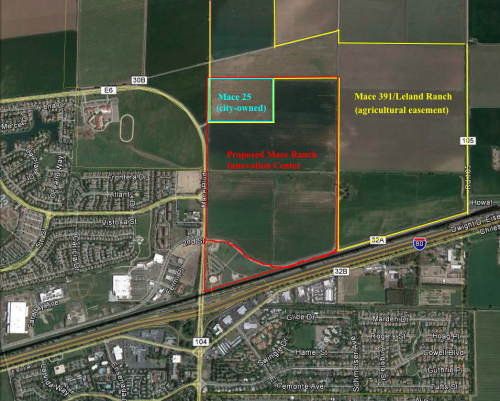 This Wednesday, July 19, the Planning Commission will vote on whether to recommend the certification of the Mace Ranch Innovation Center (MRIC) Environmental Impact Report (EIR).  In discussions of the EIR so far, many have raised concerns about the inclusion of 25 acres of City-owned land at Mace curve in the MRIC proposal and EIR.  Some have asked about the history of its inclusion.

Staff has provided some of this history for the Wednesday meeting.  However, it is incomplete.   As a commissioner on the Open Space and Habitat Commission (OSHC) since September 2010, I have been part of many of the discussions about the 25 acres, and to help fill in the missing history, I have put together the following timeline, based on staff reports and minutes from Council and Commission meetings.

I believe that this history shows that the City promised citizens that the 25 acres, purchased with open space funds, would be retained as open space, despite considering on several occasions whether to go back on that promise.

October 2012 – OSHC recommended that the City Council approve resale of the Mace Curve property as one parcel and conservation easement while retaining approximately 30 acres for a community farm.

November 2012 – Innovation Park Task Force identified Mace 390 as one of four locations as appropriate for a potential innovation business park.  OSHC was not consulted.

Late 2012-early 2013 – City staff had internal discussions about the potential for swapping privately–owned land for Mace 390 to put a business park at Mace 390.  OSHC was not consulted.

March 2013 – NRCS and YLT granted the City’s request for an extension of the March 31, 2013 easement closing deadline to explore its options regarding the property. Deadline extended to May 31, 2013.

June 2013 – OSHC heard about proposed “land swapping” for the first time, but OSHC only “cursorily advised” (Staff’s language) of this plan. Staff recommended declining the NRCS grant for

October 2013 – OSHC voted unanimously to reaffirm its support of Council’s June 2013 decision to place a permanent conservation easement on the property and establishment of a community farm on 27 acres; the Commission further advised the Council first to use the Commission to evaluate any open space alternatives that may arise in connection with this property.  Staff initiated survey work to establish 27-acre parcel for potential community farm.

November 2013 – Council again reaffirmed its intention to resell Leland Ranch with a conservation easement, which it did shortly thereafter.

July, October 2014 – Inclusion of the 25-acre parcel in the MRIC application – an approximately 200-acre parcel to the south of Leland Ranch – was discussed at City Council meetings as a part of Innovation Center agenda items.

March 2016 – OSHC was not given an opportunity to comment on the Mace final EIR or to say whether it thought its concerns had been adequately addressed, but it voted unanimously to recommend “that the City’s 25 acres of open space – acres that were purchased by the City with open space funds to be used as open space – are kept as open space, either as a farm or habitat area. There should be no buildings on the City’s 25 acres of open space, except those necessary to maintain the farm and/or habitat area.”

The Staff report for Wednesday’s Planning Commission meeting makes it sound as though the issue is whether a community farm is appropriate for the 25 acres.  The above history shows that that is not the issue.

The MRIC EIR takes none of this into account.  I urge the Planning Commission to reject the certification of the EIR for this reason.

Roberta Millstein has been a resident of Davis since 2007 and a commissioner on the Open Space and Habitat Commission since 2010.  She is a professor in the Department of Philosophy at UC Davis, specializing in philosophy of biology and environmental ethics.  All opinions expressed here are hers alone.

6 thoughts on “Guest Commentary: How 25 Acres of Open Space Got into the MRIC Proposal”