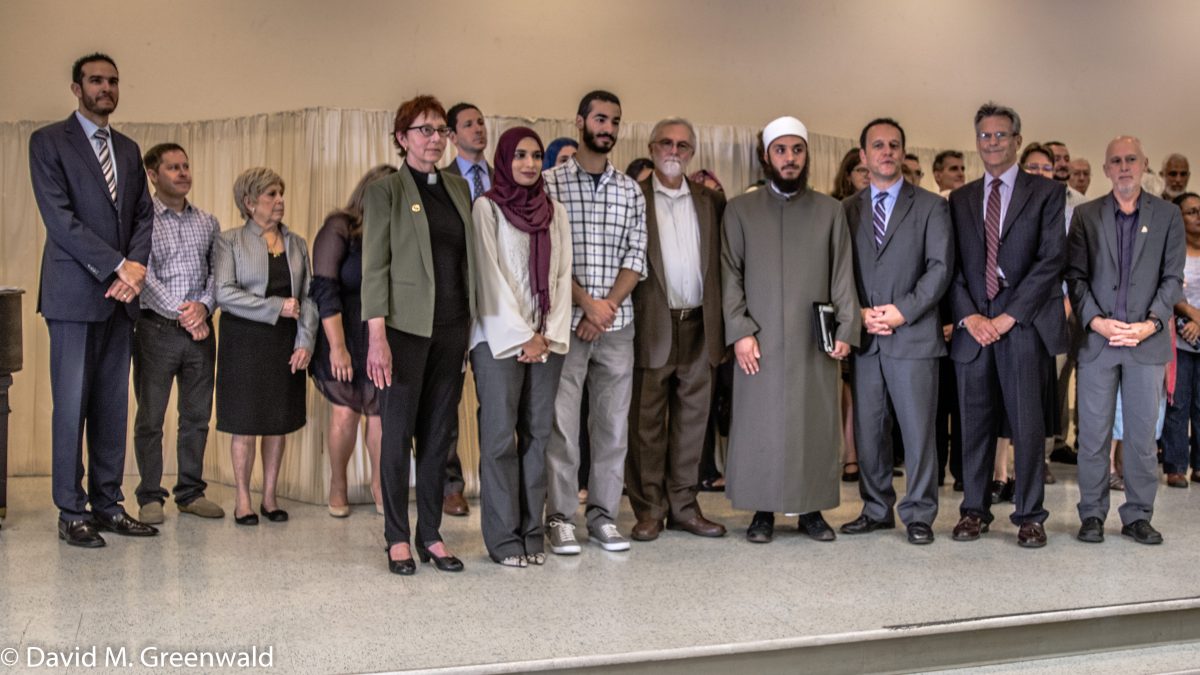 On Friday morning, Imam Ammar Shahin apologized for the content of his recent sermon.  Here are some of the reactions.

The Board of Directors of Congregation Bet Haverim in Davis issued a response to an apology issued earlier in the day by Imam Ammar Shahin for an anti-Semitic sermon delivered at the Islamic Center of Davis on Friday, July 21.

“Imam Shahin’s words today are a beginning,” Bet Haverim Co-President Steve Cohan stated, on behalf of the synagogue’s 13 Board members.  “It is through the integrity of this message, with the Imam’s and Muslim community’s words and actions, that healing will take place.  Along with other Davis faith and civic communities, we look forward to and sincerely hope that outcome is achieved and sustained.  We are indebted to the interfaith and secular leadership group that worked in earnest effort to facilitate this apology today,” Cohan concluded.

“It was so sincere. When he came back, he had tears in his eyes. Imam Shahin gained my respect. The courage that took. Wow. The thing that will be remembered is not the sermon, but the actions today.”

“I was so angry.”  But he said that “through the process of the last several hours and days, as I worked with the Muslim community to bring about this event, the process of dealing with the problem, coming together, has created a good deal of hope in my mind and made me realize that we have the foundation to keep working together and make that relationship – and it is so important now that we be together because of the forces we face.

“We’re allies most of the time,” he said.  “And when we got done preparing for this event, we were allies again.”

“Sheik Shahin – I deeply appreciate and accept your words of apology,” the Rabbi said.  “As you know as well as I, apologies are only as worthy as the actions that follow. So I call upon you, I implore you to follow up those words with actions.

“Nothing less than that will satisfy the community that you serve and I serve,” he said.

“The world that we have today is in fact broken, as Mayor Robb Davis spoke of,” he said.  “In Judaism we say it’s made up of broken shards of the earth and hidden sparks of divinity.  To heal the world to me means putting those broken pieces back together and finding those hidden sparks.”

He said that seven or eight of them had met for hours and talked and discussed.  He said that “we found that we agreed on far more than we disagreed.  That was putting the broken pieces together and we shared holy sparks as well.”

His last words were to his friend Ammar (as opposed to the Sheik Shahin), “I count you as a colleague, I hope that you can live up to being amongst your colleagues here as being one of many clergy here in Davis.  We are here to support you, to guide you, and to take your guidance.”

“Something special happened today in Davis, California. A few days ago in the community we share, ugly words were spoken. The news of this hurtful incident traveled widely. It broke our hearts and it fed hatred and anger here and elsewhere.

“We have been deeply troubled by the incident and grappled with its meaning and the best steps forward. The easy course, indeed the natural course, is to condemn and feed the strife. In fact, the words must be condemned.

“Over the past several days, people of good will came together. I believe lessons were learned. I believe that the strength of the fabric of community built over years of interfaith work is standing the test of this incident, at least locally. The arc of history is made of the individual actions of people of character.

“Thoughtful people from Congregation Bet Haverim and the Islamic Center of Davis, along with regional interfaith leaders, talked and met for many hours to discern right action. Today, we stood together to accept a sincere apology for genuine hurt and recommit to community. Let that be what we remember.

“The injury does not go away and hurt remains. The impact of the words will linger. There are no perfect humans and none of us resides without error. But let us remember that we share community in this small place in a troubled world. And today, one man in one small town said, I understand the harm and I am sorry for the hurt, and others said we accept your apology.

“Thank you to Rabbi Seth Castleman, Bruce Pomer, Steve Cohan, Imam Ammar Shahin, and all others who worked to bring us to a better path. Together we move forward with trust and deeper connection. We will hold one another accountable for restoring the fabric that has been torn. May this be what we remember.”

“I believe that his morning’s apology by Davis Islamic Center’s Imam Ammar Shahin was sincere. Many in Davis and beyond, (including myself), have been hurt and angered by his hateful words, and I am deeply appreciative of the opportunity to stand in solidarity with various clergy and community leaders, as we attempt to start the healing process.

“Of course, actions do speak louder than words, and I’m ready to get to work. I hope you’ll join me (and us), in the healing and community building process.”

“We unequivocally condemn the anti-Semitic sermon delivered last week by Imam Ammar Shahin at the Islamic Center of Davis.  It is hate speech and it has no place in our community.

“What is jarring is that this was delivered in this community. We have lived here for nearly 40 years and know most of the religious leaders.  We have experienced crises with them, as elected officials.  We have watched many of them use their positions to calm their congregants, while at the same time drawing commitments from all to act locally. Never have we heard a similar sermon from any one of them.  He exhorted and harangued the audience.  The words themselves have a familiar ring to those of us who are Jewish.  Sadly, these words reoccur over centuries.  Jewish filth was always the expression used.  Annihilate or destroy is also familiar.    More current to recent history is the fact that he cannot and does not distinguish between Jews and Israeli state policy.

“Moreover, the apparent silence of the congregation is disturbing.  Who listened that night?  Were there children present?  Did congregants raise objections at the time? Why was the first reaction from the Islamic Center’s Board so defensive and equivocal?

“This year has been a challenging one for our community, due to events both nationally and locally.  And in such times we have been impressed at how our community has consistently and strongly opposed instances of intolerance and bigotry.

“This instance is no different.  Hate has no place in our community.” 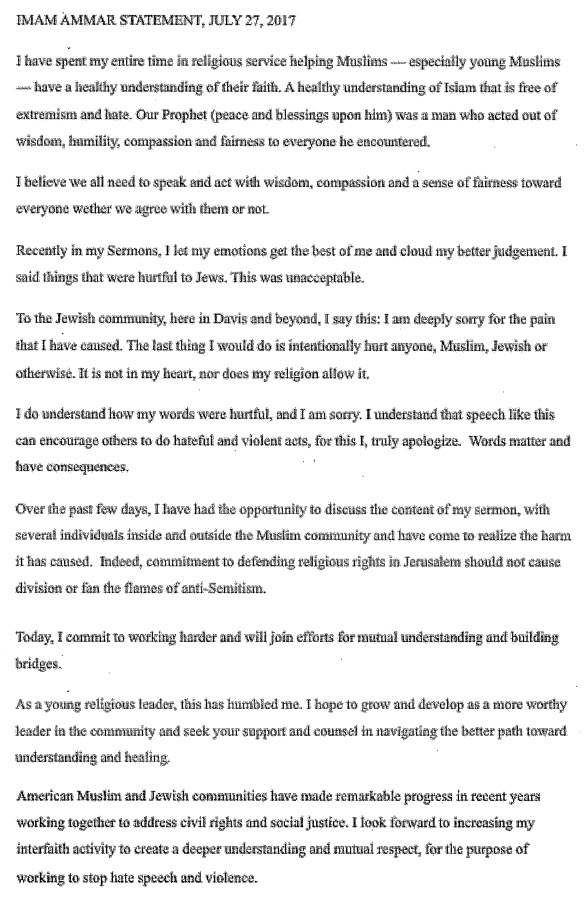 One thought on “Various Reactions to the Apology”