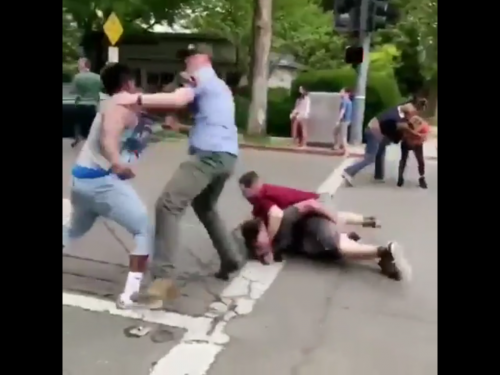 When I first read the Davis Police press release about the Picnic Day incident, which has since been taken down from the city’s website, I was skeptical of the account.  It didn’t make any sense.  As an expert told me, there seemed to be critical details missing from the account.

But I was reassured that there was “clear video” which verified the account of the police.  I was skeptical but kept this reassurance in the back of my mind.  Even as I watched the video that was released from the dash cam, there was the assurance of more video evidence.

Thursday marked only the start of the preliminary hearing, as there will be ten witnesses, at least, called by Deputy DA Ryan Couzens.  But what was telling is that we now know the sum total of the video evidence in this case – we have the dash cam video, the cell phone video that the Vanguard first received right after the incident occurred, and then about 48 seconds of video shot from the red SUV that followed the police van through the intersection.

That is not what I would call clear video evidence.  We don’t have a close-in shot of the entire incident as we would if the officers had dash cam or their body worn cameras on.  And, most importantly, we don’t have audio to go with the video that could show how the incident precipitated.

Part of what bothered me about this incident from the start was that the police’s initial account of what happened was dramatically different from what the dash cam video eventually showed.  That has always been extremely troubling.

When I questioned it, I was told “the attack was violent, unwarranted and illegal.”

One key problem is there is no audio that we know of from the early part of the exchange.  Witnesses report that they heard profanity and chanting from the people in the crowd, but they were

not able to discern who said what.

The prosecutor spent some time on Thursday attempting to debunk the notion that the van honked its horn aggressively.  One witness described it as one to 1.5 seconds and it sounded like a “move out of the way” horn.  But we don’t know if the officers in the van stated “get the f- out of the way” as they drove right into the group of people.

Another key piece of evidence figures to be whether Antwoine Perry made a gesture simulating that he may have had a weapon.  The defense immediately attacked introduction of evidence of Mr. Perry’s backpack, where the police claim to have found a round of 9 mm ammunition.

Detective Kim Walker on Thursday reported that the woman with the dash cam video saw a sudden and alarming move for his pocket by Mr. Perry as he rapidly approached the van.  She thought he was reaching either for a weapon or perhaps a phone.

The police claim that was the impetus for Sergeant Stephen Ramos exiting the van.  However, the dash cam video doesn’t clearly show much more than a slight motion and, as Attorney Jeff Raven pointed out, the motion was pretty ambiguous.  This will be key evidence that either justifies police action or impeaches their claims, but the video evidence which we have seen on this is inconclusive and the witnesses’ accounts will undoubtedly be heavily cross-examined should this case go to trial.

Another piece of information is at what point everyone figured out that these were police officers.  The driver of the red SUV figured it out immediately, apparently as he saw the driver get out with his badge on.

But Elijah Williams has been fairly consistent throughout, in his claims through Attorney Mark Reichel.  He has consistently claimed that he did not know the man he was fighting was a cop, and, when he found out, he fled, “fearing he would be Tasered or something.”

He saw a military-style dog tag around the officer’s neck, but not the badge.  His reaction was described, even by the detective, as one of confusion and disbelief.

He fell on top of Det. Ryan Bellamy, then Bellamy yelled, “Stop stop it’s the cops!”  Mr. Williams said, “What are you talking about bro?”  Det. Bellamy then yelled, “Stop resisting!”

At this point, Det. Bellamy had Mr. Williams in a headlock, so he pushed Det. Bellamy off him and fled the scene.

Detective Walker testified that Mr. Williams seemed confused by the claim that Detective Bellamy was a police officer.

Clearly his account to Detective Walker omits an acknowledgement that Ms. Reyes was striking the officer with both fists and feet.  We don’t know, of course, when Mr. Craver actually first observed their confrontation.

But he claimed he clearly intervened on her behalf, and felt it was wrong for anyone to put her in a headlock or throw her to the ground.

He described wrestling with Sgt. Ramos, pulling him down, and he put his arms around him as if putting him into a chokehold, although he said it wasn’t his intent to choke him out.

At this point Sgt. Ramos told him that he was a cop, and Mr. Craver said that he then gave up and Sgt. Ramos apprehended him.  He denied knowing Ramos was an undercover cop prior to the claim by Sgt. Ramos, at which point he also saw the badge around his neck.

The defense clearly sees two key weaknesses in the prosecution’s case – they immediately attacked the backpack and the evidence of ammunition found in Mr. Perry’s backpack, arguing that the notion he made clear moves for a weapon was contrived.  However, the prosecution has an eyewitness account that he made a sudden and alarming move for his pocket.  It will be interesting to see how that exchange plays out.

Second, they clearly made light of the inaccurate initial press release.  The judge for the most part did not allow that in, but they will be able to introduce it at the trial in their opening argument.

The job of the prosecution will be to show that they knew these guys or should have known these guys were officers.  There were badges around their necks but it’s hard to know how visible they were.  The driver of the SUV identified them as cops immediately, but he may have had a better vantage point.

The fact that there does not appear to be audio of the early exchange will make it difficult for the prosecution to prove that this was an unprovoked attack knowingly undertaken on police officers.

Without the knowledge that these were police officers, the jury would get a credible argument for self-defense.  Because Romeo Lopez is not being charged at this time, the thrown bottle is going to be a non-issue, but the defense will have to explain away Ms. Reyes’ conduct of punching and kicking the officer while he was down.

Without clear video, this becomes a difficult case for the prosecution to win.

9 thoughts on “My View: We Learned There Is No Clear Video Evidence in Picnic Day Case”