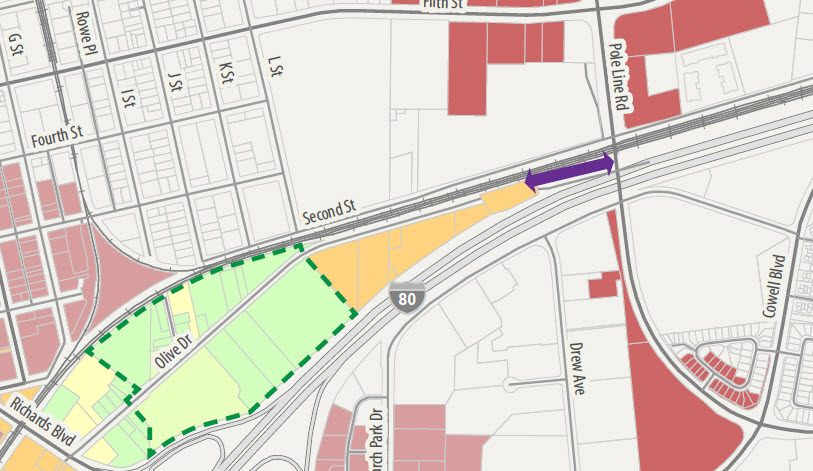 (From Press Release) – On October 18, the California Transportation Commission awarded the City of Davis $3.54 million to design and construct a bicycle and pedestrian bridge connection between the US40 multiuse path (along East Olive Drive) and the Pole Line Road overcrossing. The grant award will also fund safety improvements around Montgomery Elementary School. The total project cost is estimated at approximately $4.5 million, including local funding contributions.

“The award from the state allows us to construct this missing link of safe bicycling and pedestrian infrastructure. It is critical to provide additional transportation options for the difficult-to-

access Olive Drive neighborhood. This is yet another example of the City working with our regional partners, including SACOG, to leverage our local dollars multiple times over to achieve real and tangible community benefits,” said City Councilmember Lucas Frerichs.

While the new bridge will improve neighborhood connectivity to Montgomery Elementary and other destinations such as shopping, employment centers and parks, it will also improve access to the downtown and south end of the UC Davis campus. This project is one of several planned in the Richards Blvd/Olive Drive Corridor Study to improve overall connectivity between and through the neighborhood. Other key endeavors include the Richards/I-80 interchange reconfiguration, and a bicycle/pedestrian connection between Olive Drive and the downtown train station.

“Solving the longstanding connectivity challenges caused by the freeway and railroad infrastructure is important for the Olive Drive neighborhood and provides substantial benefits for the entire community as well. Everybody wins”, said Mayor Robb Davis.

The City submitted the grant application in Summer 2016 to the California Transportation Commission’s Active Transportation Program, which is administered by Caltrans. The program’s purpose is to encourage increased use of active modes of transportation, such as biking and walking. Just missing the cut in 2016 due to program competitiveness, the City and our partners persevered and the project was selected in the 2017 Augmentation Cycle resulting from additional funding from Senate Bill 1, which increases statewide fuel taxes.