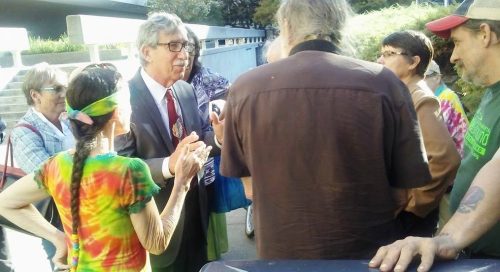 By Novpreet Shoker  and  Cres Vellucci

After three days of testimony by the homeless community, clergy, lawyers and a medical expert, among others, the plaintiffs in a civil suit against the City of Sacramento rested Monday here in Sacramento Superior Court. The City presents its case starting Tuesday.

But not after some fireworks ensued Monday in the trial, in which Plaintiffs seek to prove the city’s “anti-camping” ordinance has been – for 22 years – selectively enforced against the homeless in Sacramento, and is thus unconstitutional. Plaintiffs are asking for no money damages, just declaratory relief from the consequences that arise from this ordinance.

The lawsuit traces back to 2009 when a small homeless community, referred to as the “Safeground Pioneers,” was arrested for camping on a private lot of land, despite having permission from its property owner. The individuals were arrested under Sacramento’s no camping ordinance.

Early Monday morning, Senior Deputy City Attorney Chance Trimm tried unsuccessfully to reduce the number of plaintiffs in the case, but Superior Court Judge Christopher E. Krueger disagreed. The judge disagreed with Trimm all day – at one point remarking in response to a Trimm comment that “the homeless don’t have a card. It is a condition.”

Trimm objected Dr. Meek’s testimony, noting he is “not an expert on what ‘cruel and unusual punishment’ is” and that the details of this case are “outside the scope of his knowledge.” Trimm said

the doctor’s testimony would be “highly prejudicial and inflammatory.”

Dr. Meek was called by Plaintiffs’ attorney Mark Merin to “enlighten” the jury on the characteristics and vulnerabilities of the homeless community.

That led to an hour-long hearing out of the presence of the jury where Dr. Meek, in effect, repeated his resume that included stints as working as a psychiatrist for University of California at Davis, the Veterans Administration and the Dept. of Corrections at Folsom Prison. He was also the Mental Health Director for Colusa County.

“It’s complicated but the homeless, especially adolescents, are unsupported, from their families, (and) assaulted in the streets. Homeless are socially isolated. And stressors causes anxiety, fear and paranoia,” said Dr. Meek, who saw about eight people a day the clinic, many of them homeless.

He explained their “life on the streets” cause dangers to their mental and physical health, and noted that one major problem is sleep deprivation. “The medical field underestimated the value of sleep – lack of it causes fuzzy thinking…and compromised immune systems.”

And then his testimony really became interesting because it tied the anti-camping ordinance to the well-being of the homeless.

“The inability to not get good rest, which can lead to these health problems, only exacerbates their situation….it’s detrimental having to sleep with one eye open with a fear of being rousted by police,” said Dr. Meek.

“(Arrests) don’t have a positive impact. It’s inefficient, it doesn’t solve the problem and it’s much more expensive than finding them permanent housing,” added Dr. Meek, who said he has new concerns about a “new wave” of homeless – families of 3, 4 and 5 people including children.

Merin also called in Reverand James Moss as a witness. Rev. Moss was one of the individuals that led the Safeground and was arrested, back in 2009. During questioning, it was revealed that in the movement of finding low-income housing, camping on this private land was a “way of becoming a little more visible” as a non-advantaged group.

The witness went on to say that Safeground was “very careful about keeping it clean and orderly,” which included “no drinking, no drugs, and no sexual harassment.”

Merin asked about neighboring houses and if there were any issues with them. Rev. Moss explained that he approached neighbors to address the concerns some had about the group being so close, (but) the neighbors did not open their doors.

When Deputy City Attorney (DCA) Trimm questioned the witness, the witness elaborated that the purpose of camping on this land “was to see if they were allowed to do it.” Trimm then asked if what Safeground did was illegal, and the witness responded, “we were illegal wherever we were.”

Merin – to show the no-camping ordinance was selectively enforced – called witnesses that admitted they had camped for days in tents to get deals on Black Friday at Arden Fair Mall, and not only were they not arrested, as homeless are, but City police protected them.

Others testified that people camped at Fairytale Land with no arrests, although in violation of the law.

Finally, Kelly Hopkins, of the Sacramento Valley Conservancy, admitted on the stand that girl scouts, boy scouts, schools and church groups, among others, “camped in designated primitive campsites” at Camp Pollock in North Sacramento without a permit. Yet no one was arrested, she said.

The testimony in the trial continues Tuesday at 9 a.m. in Dept 1 in Sacramento Superior Court with witnesses for the City.