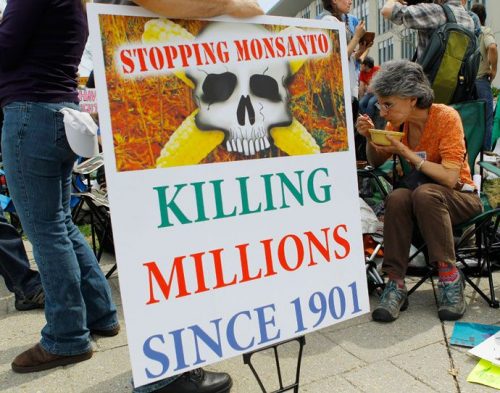 Ten activists arrested at Monsanto in Woodland – the largest bioseed facility in the world – last May 22 will have to wait until January to, as they have touted, “put Monsanto on trial for poisoning the world.”

The human rights and environmental advocates – self-described as the “Monsanto 10” – were told instead on the day of their scheduled trial that it has been postponed until Jan. 17. No judges or courtrooms were available to hear their cases late Tuesday.

Even though the charge is “loitering” and only an infraction – downgraded from multiple misdemeanors by the District Attorney to avoid having a jury hear the case, the activists contend – the group had planned to call more than a dozen sheriff’s deputies, two top executives of Monsanto Woodland and numerous environmental experts.

And, Richard Dudek, the only attorney in the bunch (representing pro bono out-of-towner Elliott Adams) – the other nine activists are representing themselves – was prepared to present a court brief claiming the loitering charge was unconstitutional as applied to free speech activities and should be immediately dismissed.

“Defendant Adams…objects to enforcement of the ordinance as a violation of the due process clause of the Fourteenth Amendment of the U.S. Constitution (and) unduly restricting his First Amendment rights,” according to the trial brief. Recent U.S. Supreme Court cases tossed out similar ordinances, opining that “freedom to loiter” is protected, Dudek said.

One defendant, Susan Roberts Emery of Nevada City, had a prepared statement for the trial court – before it was postponed. Part of it read:

“I have friends who have autistic children, and grandchildren. I was at the Monsanto for those children…(and) for my great niece Rayna, who was born with her intestines outside her body…(and) for my husband Ben, who suffered colorectal cancer, my mother-in-law Barbara with breast cancer and my father-in-law Bob with Lewy Bodies Parkinson’s and my own father, Lt. Col. George Roberts, who died of dementia. I was there for the farmers who do not even know they are spray(ing) a carcinogen.”

The day of the Woodland protest there were more than 400 “Anti-Monsanto/Anti-GMO” demonstrations worldwide in 47 states and 52 countries, and Woodland was a major target. The Woodland Monsanto plant is the world’s largest Biotech seed facility in the world, activists said.

Activists cite the World Health Organization’s determination that Monsanto’s Roundup is a “probable carcinogen.” Glyphosate has been found in groundwater and 60-100 percent of rainwater around the world, said activists, who said it portends global mass pollution.

Activists said GMOs are banned or partially banned in France, Switzerland, Ireland, Russia, Japan, New Zealand, Costa Rico, Austria, Germany, Greece, Peru and Hungary, among others nations. Labeling products with GMOs is a controversial issue and not mandated in the U.S., but about 60 countries have labeling.  Many polls show an overwhelming number of Americans would accept GMO labeling.

“Glyphosate is the most widely used pesticide in California and in the United States.  More than 280 million pounds were used in U.S. agriculture, primarily due to the widespread adoption of genetically engineered crops.  In 2013, 10 million pounds was used in California alone, with half of that usage being sprayed in eight of the state’s poorest counties on farm fields, lawns, gardens, school grounds, and parks, with five of those poorest counties being in the south Central Valley,” according to literature to be presented at the defendants’ trial in January.