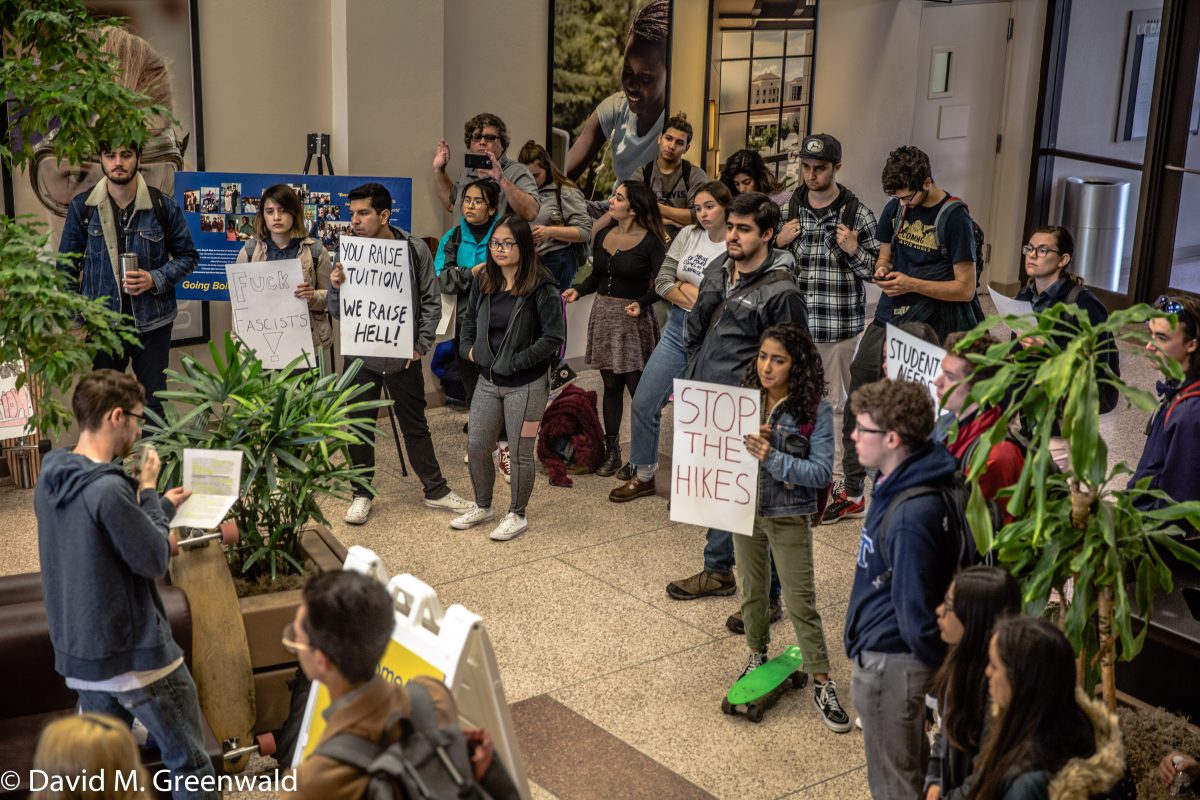 When students gathered earlier last week in front of the Memorial Union, then marched to Mrak Hall and then had an extended sit-in in protest of a proposed tuition hike, given the relatively modest scope of that tuition hike and the huge impact of the lack of affordable student housing, it is no surprise that the action rekindled the question as to why students have not protested student housing in the past.

Before I get into that question, it should be noted, first of all, that during the speeches, one of the complaints against the administration was in fact the lack of affordable housing on campus.

In fact, on the leaflets they issued six demands:

The vote to increase tuition will be delayed until the regents’ meeting in March where undergraduates will be present to have their voices heard.

Regents will vote to roll back tuition instead of raising it.

Administrator and executive salaries are to be redistributed to low-payed workers.

A restructuring of the University of California to include direct representatives of both students and workers on the Board of Regents and within office-holding executive positions.

The University of California Davis must commit to make affordable housing available to ease the burden of the housing crisis on low-income students.

Campus police must be disarmed of all lethal weapons.

It is worth noting that the students already succeeded with their first demand.  As the LA Times reported on Wednesday following the Board of Regents meeting, “They circulated petitions, shared their stories of hardship and pressed the University of California regents to delay a controversial vote to raise their tuition and fees.

“In the end, UC students pulled off a stunning victory when the regents voted Wednesday to put off a decision until May in order to allow time to step up pressure on the Legislature to increase state funding for the public university system.”

Here’s the thing about those protests: there was a specific vote by the regents to be taking place and the students were able to put pressure at a key time to force action.  The problem with protesting housing is that it is far more complex.

When I met with three student leaders back in May of last year, they pointed out that, while it is relatively easy to show up on a Tuesday night to advocate for a housing project, dealing with the university is a longer term process and they lack the labor or time to be able to have sit-ins in Mrak Hall to demand changes to the LRDP (Long Range Development Plan) that they may not impact – and even if they did, it wouldn’t be felt until years down the line.

“We can’t use the same tactics on the administration that we do the city,” Sara Williams continued.  “I see a lot of people saying, why don’t they sit-in on Mrak…  People seem to forget that we have lives – like we can spend our labor hosting sit-ins every day.”  She called the notion “hilarious” and said, “We can’t.”

But the issue of affordability of housing is foremost on the minds of the students, as demonstrated when they included it on their list of six demands.  But is that enough to push housing onto the stage by itself?

“I think that should be a direction that we move in,” ASUCD President Josh Dalavai recently told the Vanguard.  “I agree some direct action on that front could be fitting.”

However, community members need to recognize that, while some have drawn the line between on-campus versus off-campus housing, the students don’t view it the same way.

“It’s both, it always has been with this issue,” Josh Dalavai said.  “The student pressure has to come from both sides with some multi-faceted type of approach.”

The housing crisis is real.  Just last night, I talked to a student living in the dorms in her first year as a student, here we are late January and she’s looking for housing for next year.  She is not finding much of anything.

She told me that West Village would be an option, but the cost of housing there is more than $1000 a month.  For many students that is not affordable.

Josh Dalavai told the Vanguard that the push is now shifting to not only include a demand for student housing, but to make sure that that housing is affordable.

“We’re trying to hit really hard on affordability now,” he said.  “Now more so than ever because it doesn’t do students much good if we just erect like ten West Villages and no one can actually afford to live there.”

He pointed out that anything market rate right now is going to be expensive.  He also recognizes that that price could come down as the supply increases and the vacancy rate improves.

My take-aways from these discussions are that students are probably going to become more active in pushing direct action on housing.  It is not going to be an exclusive push for on-campus housing, when they have concerns about affordability and they recognize that it is actually easier to go to a council meeting in support of Nishi or Lincoln40.  And there is going to be a push to build more housing, but the focus is going to start shifting toward housing with affordability.

We saw a lot of that last week at the Planning Commission where the students were supportive of Nishi, they praised the affordability component, but pushed for more of it.

Share:
Tags:Affordable HousingLRDPMrak HallStudent HousingTuition HikeUC Board of Regents
Previous : Monday Morning Thoughts: Yolo County’s Conviction Integrity Unit Has Little to Show for Itself
Next : My First Night on Death Row as an Innocent Man