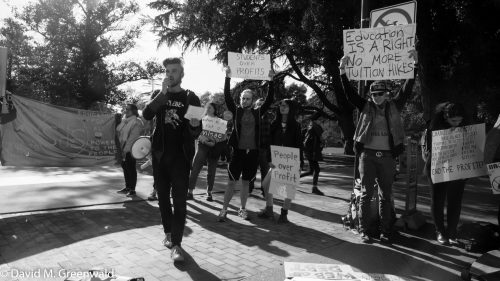 by Ellie White and  Caroline McKusick

Chancellor May’s “To Boldly Go” initiative and its committees on housing, mental health, and food insecurity miss one crucial element: where. To boldly go where? We, the students, are here, we have been here fighting for these issues loudly, and we are not going anywhere. We have hit your walls and the walls stand tall.

Inspired by Sara Ahmed’s talk at UC Davis, titled “Complaint: Diversity Work, Feminism and Institutions,” I am writing to the students of UC Davis, who have been called upon to sit on the committees meant to inform the To Boldly Go initiative. Quotes from Sara Ahmed’s talk are in italics, and, examples of the purpose and operational logic of committees are taken from recent student experiences.

On the use of words: A word used more, means less. “Diversity” and “inclusion;” the administration’s “commitment” to X; or the “affordability” of on-campus housing–these words are used often, precisely because they mean less the more they are used.

If you are considered “diverse” and sit on these committees, remind yourself that unless real progress is made, you are window dressing. Diversity here is all about what you are not—not white, not cis, not able-bodied, etc.—because the university is normatively all of those things. Then, when you speak up in opposition, they may remind you not to complain because “you are not one of them,” not from “those groups” or “that identity.” Questions like “when are you graduating?”, “how much of your income goes to rent?”, or “do you have a child or family you need to support?” are meant to divide us into groups that should care and those that shouldn’t. The administration will try to make things personal to you in order to stop you from caring for others, complaining, or opposing their agenda.

Agreeing to something can be another way of stopping something from happening. A solution may even be reflected in the meeting notes, but until it is implemented, nothing should be considered a finished fight. For example, on January 23rd, 2018, Chancellor May came to a protest on tuition hikes[1] and asked to talk to the students if the organizer would put down the megaphone and stop what they were doing. The agreement to talk, at that moment, was not made in order to hold an honest dialogue, but to sabotage the protest.

On the use of power: A locked door is a wall when you don’t have the key. The power dynamics will reveal themselves to you the more you become familiar with the

committees. Expect the people on the committee to be the gatekeepers of the people who make the consequential decisions. Although the gesture of having you join the committee may be made to look like the administration is opening doors, these doors are actually locked. They are therefore the equivalent of a wall.

Two examples come from the committees formed to make decisions about Orchard Park, the affordable family housing that UC Davis demolished with no plans to replace it. One was the Grad Studies Student Family Housing Redevelopment committee, a committee that was outwardly very supportive of students; the other was the Orchard Park PAC (Project Advisory Committee), meant to select a developer for the new housing on the site of Orchard Park. In both examples, the committees either did not have any power to give to students who came to meetings, or chose not to give students any power. The administration’s final defense was to claim that they were not responsible–that they were at the mercy of their credit-to-debt ratio, that they were beholden to university and UCOP policies, that their hands were tied. A committee that has no power cannot give any away.

On the misuse of complaints: Be prepared for your opposition or complaint to be folded into the solution. Under this logic, because you were allowed to complain and the institution provided a space for that, they did their part and the problem has been solved. You need to be grateful for being heard and forget about the problem that sparked your complaint. Now the complaint needs to go away. You need to go away.

On the use of committees: The reason for the committee is to create evidence of doing something, which is not the same thing as doing something. For example, at the Orchard Park PAC, mentioned above, students communicated four clear demands for future housing, and were given nothing in return for their efforts and labor. The PAC operated as though those voices were never there, and it was dismantled as soon as its sole goal (selecting the developer for the project) was over. Currently, there is no information being given to students about the ongoing negotiations over housing in which students will be living. The PAC created evidence of including student concerns in their decision-making without including student concerns in their decision-making.

On the use of town halls: Town halls and open meetings are meant to calm the students. A town hall allows a complaint to be expressed, not addressed. For example, on February 12th, 2018, at the mental health town hall, students were rightfully upset at the mismanagement of funds (not getting the 12 counselors they were promised); the unfair firing of the whistleblower, Sarah Hahn, who exposed the wrongdoings; and students’ personal struggles to get needed mental health services[2]. As the administration made clear multiple times, the town hall was there to “let the students have a dialogue, not a debate” and for discussion to be “civil.” They realize that the students are upset (why else would they have police and security present at these events?), but they only want to calm the students so they do not further harm the image of the institution. The problem is that they do not want to address the problem.

On the use of designed ambiguity and non-transparency: Another way to stop opposition is by supplying you with incomprehensible, unintelligible documents that are hard to find and utilize.

For example, on January 23rd, 2018, the Vice Chancellor of Finance, Operations and Administration, Kelly Ratliff, supplied the students at the Chancellor’s Leadership Development Series with a two-page Budget and Institutional Analysis that only provides aggregated data, which renders it useless and immune to scrutiny and criticism. The information desired, the true financial priorities of the administration, is impossible to extract from such a document. The administration’s argument against supplying a detailed analysis of the budget is that the information is “too complex.” Even so, complexity would not render documents incomprehensible to the students at a top public university.

Also, in multiple meetings between students advocating for affordable housing and Student Housing and Dining Services, the administration acts as though they have been transparent with the information, either by saying they will supply the information (“just email me” or “I’ll see what I can get for you”) or that it is already available (“it’s all online; you just haven’t looked”). Later, when you try to find the information, it is nowhere to be found, and in some cases, you have to legally require the administration to give it to you (through FOIA and CPRA requests)[3]. This information takes the public records office months to process, will cost you 25 cents per page, is 300 pages long, and is mostly redacted. This is the information that was “already there and available.” We are back to words that mean less the more they are used.

On your use and functionality: According to the administration, you are there to provide input and advice; that is your function. But to have a more useful function for the students, you can use these committees to register a complaint. If the administration does not erase all traces of your complaint, you can use your complaint as a recording device, and record what you do not want to reproduce. Be warned that if you do complain, your voice of opposition will probably be the only dissenting one in the room. Furthermore, you will be complaining to the very same people who have been generating the complaints; other student activists have been complaining about the same administrators that are sitting on these committees. This amounts to politely asking for something from the very person that has taken it from you. Another more useful function is for you to act as an informant for the community you truly serve: your fellow students, so, pressure can be put on from the outside.

These processes may be prevalent in varying degrees in the committees that have existed at UC Davis, but they are particularly dangerous in the case of the three committees mentioned above: housing, mental health, and food insecurity. At stake are basic questions of survival, questions of basic needs[4], and these questions are likely going to be subjected to the same processes explained here. One has to wonder for whom is the administration assembling this university? Being an advocate for students you want your university to be assembled for requires confidence, tenacity, and knowing how to keep saying no. You will get worn out; some will give up, some will graduate, and the wall may be left only scratched. You care if you complain. You care if you stand up in opposition. You care if you protest.

[1] Organized by the Students for a Democratic Society (SDS).  https://www.facebook.com/SDSDavis/

[4] Aggie Compass is a new student requested initiative that aims to be quite literally a compass of support for students dealing with basic needs insecurities.

4 thoughts on “In Response to “To Boldly Go” Committees”