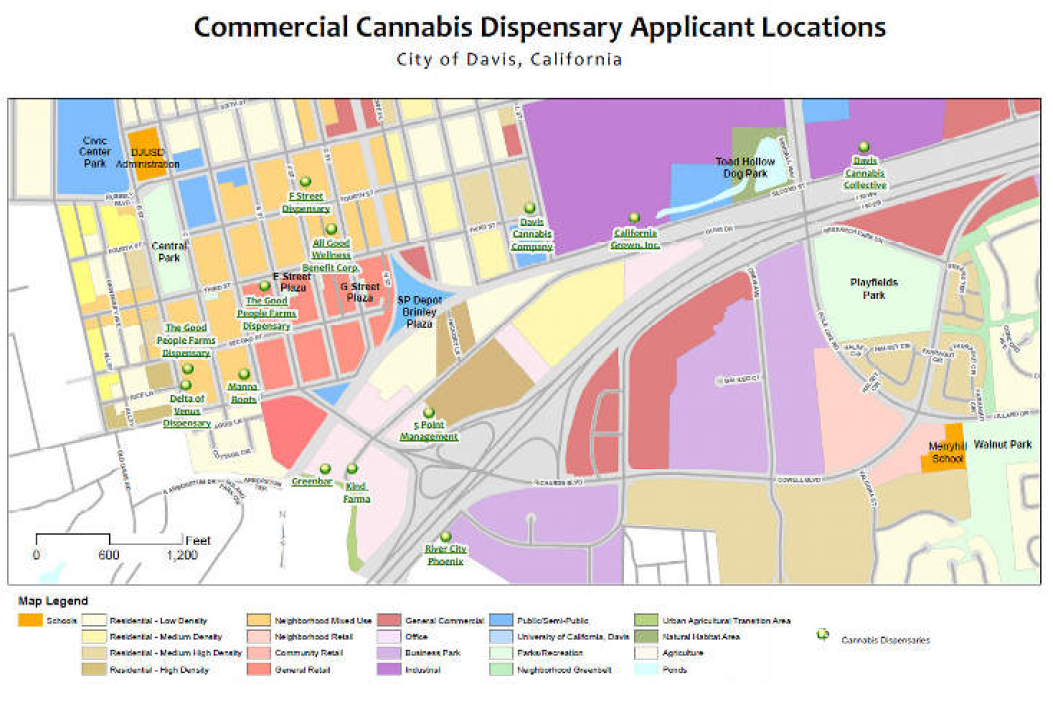 The long process of approving Conditional Use Permits (CUPs) for cannabis dispensary applications will continue on Tuesday as the council will hear staff’s and applicants’ presentations, but will not vote on approval of up to four dispensaries until May 29.

Provisions of the ordinance that the council passed allows for no more than four cannabis retailers for an 18-month period, “thereafter City Council may, in its sole discretion, determine that additional use permit applications may be accepted for cannabis retailers to establish in the City.”

Thirteen applicants submitted their proposals, aware of this provision limiting the number of retailers and with the “understanding that not every application would be granted a use permit.” 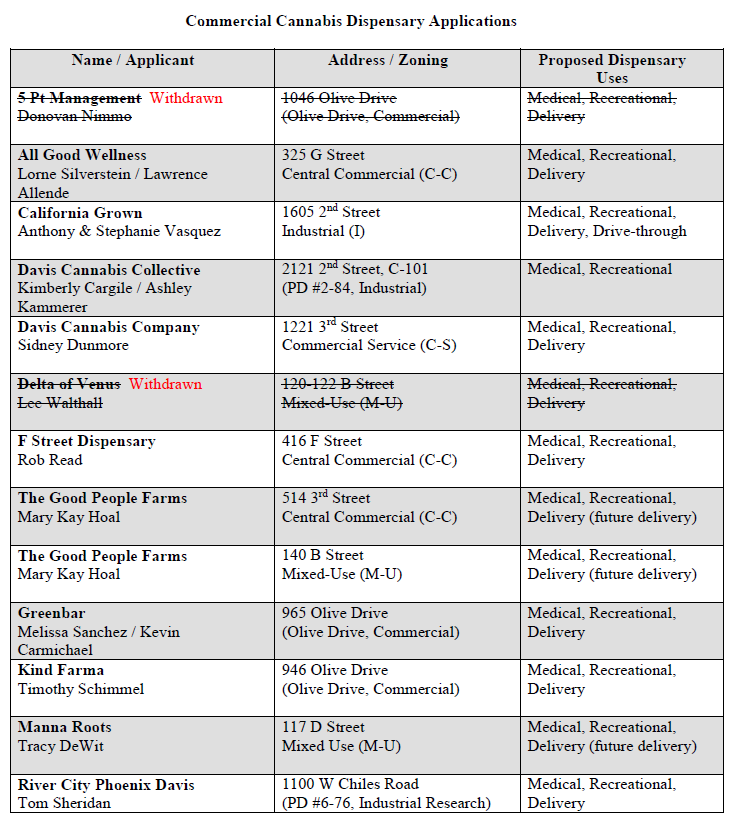 The Planning Commission reviewed and provided feedback on the applications and made their recommendations.  As a result, there are now just 11 applicants with two of the proposals having been withdrawn.  Gone now are the 5 Point Management application located at 1046 Olive Drive, and the Delta of Venus application on B Street.

The commission “voted on the applications and identified those which they felt warranted future City Council consideration.” 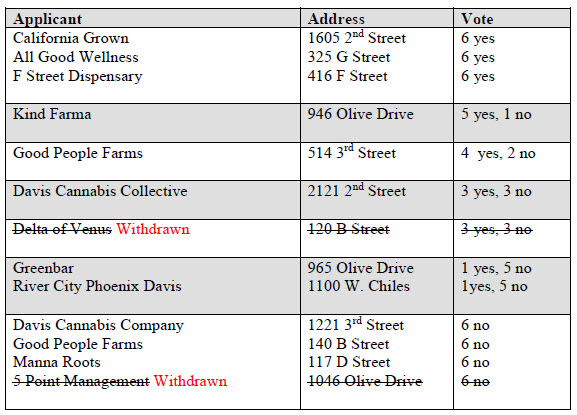 The three top votes at this point were for California Grown, All Good Wellness, and the F Street Dispensary.  Kind Farma on Olive Drive received five votes, while the 3rd Street version of Good People Farms

According to staff, a CUP is required for retail cannabis businesses in Davis.  They write, “The CUP process affords broad public review and evaluation of those uses which require special consideration to ensure proper integration into the community; mitigation of any potentially adverse impacts; and making the required findings to permit the use.”

It is important to note, “A CUP runs with the land unless the use ceases or the CUP is revoked. Once approved, should ownership of the land or the business change, the CUP would remain valid at the location approved.”

The ordinance contains some limitations prohibiting the issuance of CUPs in residential districts – including one-family, one- and two-family, mobile home, and multi-family residential districts – as well as Planned Development districts with residential uses of a similar nature.  There is also a 600-foot radius buffering dispensaries from uses such as schools, day cares, and places where children congregate, per state law.

In considering an application for a conditional use, “due regard shall be given to the nature and condition of the proposed or existing use and all adjacent uses and structures and may impose such

requirements and conditions with respect to location, construction, maintenance and operation, as may be deemed necessary for the protection of adjacent properties and the public interest.”

Prior to the Planning Commission meeting, staff evaluated each application and took into account land use factors, applicant presentations and public testimony.

When city staff went through and grouped the 13 applications for Conditional Use Permits into four tiers, they identified seven in Tier 1 or Tier 2, including just two – All Good Wellness and Good People Farms – in the downtown area.

According to staff, those in the downtown caused “the most friction with adjacent neighbors and/or presented staff with concern in regards to compatibility with adjacent uses.”  But they also asked the commission to give them additional thoughts about locating any dispensaries in the downtown area.

Staff seemed to weigh heavily whether the application drew opposition, but that proved to be somewhat controversial as well, as one applicant pushed back with many letters of support as a means to counterweigh opposition.

The result was a different mix by the Planning Commission than the ones presented by city staff.

The votes by the commission are simply advisory.  Community Development Director Ashley Feeney, who has since departed the city, told the Vanguard, “We’ll have our final recommendations for City Council. That wasn’t a consensus by the entire commission.”

Instead, he explained that the vote was indicative of which locations warranted further consideration by council.

While the commission as a whole emphasized downtown as a location, staff will look at a variety of locations and considerations.

They believe that some customers will have a single purpose for making trips, and therefore their presence may not enhance the downtown.

The view is that, while downtown is worthy of consideration and there could be some benefit to other merchants, there is also a feeling that it would be a mistake to locate all of them downtown.

Staff has made no additional recommendations to council and the purpose of the May 1 meeting is simply to hear the presentations.

Share:
Tags:Cannabis DispensaryCannabis Ordinanceland use
Previous : Analysis: Consensus That Nishi Affordable Housing Would Need a New Vote to Change It
Next : Commentary: Why Will Arnold’s Endorsement Might Be a Gamechanger in the DA’s Race