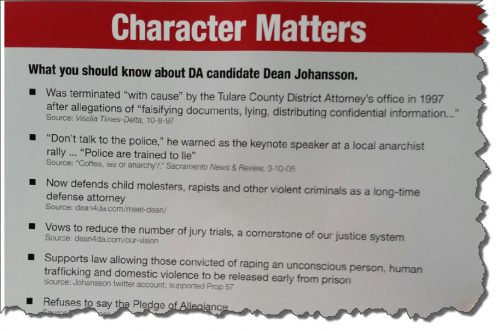 Does Reisig Not Support the Right to Counsel or Public Defense?

The most telling aspect of the attack mailer that came out on this week was its source – “Paid for by Jeff Reisig for Yolo County District Attorney.”  Jeff Reisig cannot hide this time by claiming this was a third party piece.

For those wondering about the state of this race, the fact that three weeks before the election Jeff Reisig put out an attack mailer, with his own name on it, speaks volumes about how the three-term incumbent views this race.

The remarkable aspect of this mailer is that it doubles down on all of the third party attacks on Dean Johansson.

It then notes “Johansson was investigated for domestic violence against his children” and republishes the 11-year-old police report we believe has been unlawfully leaked to the public.

We have already addressed the so-called scandals and in a way this is good – it means that Mr. Reisig is owning these allegations.  He cannot hide behind the fact that third parties have fired these attack ads.

While we have already addressed the situations that led to Mr. Johansson’s termination over 20 years ago, the police report from 11 years ago and the pledge of allegiance, I think the most appalling allegation is the third one listed: “Now defends child molesters, rapists and other violent criminals as a long-time defense attorney.”

I find this an appallingly cynical attack against a man whose job it is to protect the poor and those unable to afford their own counsel.

Jeff Reisig is, in fact, attacking two of the fundamental cornerstones of our criminal justice.  First, the presumption of innocence.  Every person who is accused of a crime in our criminal justice is presumed to be innocent until proven guilty in a court of law or, perhaps more often, until they waive their right to that presumption by entering into a plea agreement.

Under the Fifth Amendment to the constitution, “No person shall… be deprived of life, liberty, or property, without due process of law…”

Under the Sixth Amendment, “The accused shall enjoy the right to a speedy and public trial, by an impartial jury of the State and district wherein the crime shall have been committed…  and to have the Assistance of Counsel for his defence.”

Under the landmark 1963 Supreme Court Decision Gideon v. Wainwright, the court held the Sixth Amendment’s guarantee of counsel to be a “fundamental right” that is essential to the right to a fair trial, and is applied to the states through the Due Process Clause of the Fourteenth Amendment.

Justice Hugo Black, writing for the majority in a unanimous decision, stated that “reason and reflection require us to recognize that in our adversary system of criminal justice, any person haled into court, who is too poor to hire a lawyer, cannot be assured a fair trial unless counsel is provided for him.”

He would add that the “noble ideal” of “fair trials before impartial tribunals in which every defendant stands equal before the law . . . cannot be realized if the poor man charged with a crime has to face his accusers without a lawyer to assist him.”

The EFFECTIVE assistance of counsel is seen as a fundamental right embodied within our constitution.

As a deputy public defender, Dean Johansson and others in our criminal justice system are providing the constitutional duty to defend the accused in a court of law.  And render not only legal assistance, but “effective legal counsel.”

Dean Johansson does not choose his clients.  According to Public Defender Tracie Olson’s presentation in front of the Board of Supervisors, the Yolo County Public Defender’s Office represents clients in 81 percent of all criminal matters in Yolo County.  It stands to reason that among those will be people who are ultimately convicted of horrible crimes in a court of law.

But in order to defend innocent people, they must defend everyone.

As Ms. Olson wrote in column in the Vanguard to commemorate the 50th anniversary of the Wainwright decision, “‘How do you sleep at night doing what you do?’  This question is typically asked by the person who can’t fathom actually needing a public defender for himself, a family member, or a friend.  However, when something goes wrong in one of their lives, we are the first ones they call – and it’s only then that they truly understand.”

But that is precisely what Jeff Reisig is attacking Dean Johansson for doing – his job, in fact, his constitutional duty to defend the rights of the accused until and unless they are found guilty in a court of law.  Lord know there have been enough people even in this county who have be wrongly convicted of crimes, including those under the watch of this district attorney.

Jeff Reisig should not be attacking Dean Johansson for doing his job.  That is a below the belt blow that aims at the very fabric of our criminal justice system.  Does Mr. Reisig really not believe in due process of law?  Does he really not believe in the right to effective assistance of counsel?  Does he believe that the court was wrong in Gideon?  Or is he simply trying to cynically manipulate the public in this respect?

16 thoughts on “Sunday Commentary: Attack Piece Targets Johansson for Being a Public Defender”