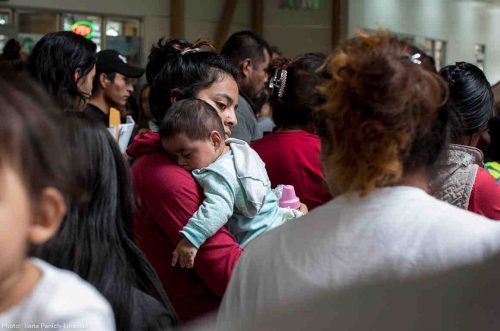 The family separation crisis took a turn yesterday, when the Trump administration revealed in a federal court filing its intention to deport families immediately upon reunifying them. The ACLU had sought a court order blocking the deportation of any parent with a final order of removal until one week after notification that they have been reunited with their children.

This waiting period is crucial to ensure that parents have an opportunity to make an informed decision about whether to fight their own removal cases, leave their children (who may have their own asylum claims) behind in the United States, or make some other decision. In short, families will be making life-altering decisions after months of traumatic separation — and the fact that the government is trying to shortchange them a matter of days to do so is galling.

On Tuesday in court, we argued that given reports of a chaotic reunification process — not to mention the trauma caused by prolonged involuntary separation — families require a waiting period of seven days after notification of reunion, so that they can meet with attorneys and be fully apprised of their rights before any deportations occur. A Justice Department attorney pushed back, saying “The government takes issue with the assertion that there is a mess on the ground. We have many reasons to be proud of this effort.”

Well, here’s what we take issue with:

These are only some of the stories emerging from on the ground where advocates and attorneys are diligently trying to reach hundreds of parents at risk of deportation — 900 by the government’s latest tally.

The emotional and logistical obstacles to providing meaningful counsel in even just seven days are significant. Parents are seeing their children for the first time in weeks or even months. For many, they are understandably too traumatized to receive even basic legal advice.

Manoj Govindaiah, the director of Family Detention Services at the immigrant services group RAICES, provided this snapshot of his experience counseling families who had been reunified and detained at Karnes detention center just days ago:

The experience of separation has also inculcated families with skepticism and distrust to a level that far exceeds any that I have previously experienced with our clients. Many fathers needed extended coaxing in order to believe that I was not there to take their children away from them. One father asked me multiple times to prove who I was (when I introduced myself as a lawyer from RAICES), and showing him my bar card, my business card, and my driver’s license was insufficient. It was only when I went through our database and listed the names of all the RAICES staff and volunteers that I believe he had previously met with that he appeared to believe I was who I said I was. At the conclusion of our meeting, when I asked him why he was distrustful of me at first, he said something along the lines of since he and his son entered this country, they have been lied to, that he doesn’t know who is government and who isn’t, and now that he has his son back, he will not let his son go anywhere without him.

Mr. Govindaiah also shared that “trauma has made it difficult for parents to even comprehend or focus on what lawyers advise,” sharing how one father responded to every statement he made by asking whether he could stay with his son.

One father could not comprehend anything I was saying. Any statement I made would elicit a response of “but my son and I can stay together, right?” When we discussed his legal options, his repeated response was “but as long as I’m with my son, I’ll be ok. I’ll be with my son that whole time, right?” The meeting ended without any meaningful information being developed from the client or advice being provided because the father could not move past his fear of re-separation.

Even if attorneys are able to counsel families despite the enormous and understandable emotional strain they are under, there are logistical impediments that make these cases unusually complex.

Most families who come to family detention centers have their proceedings conducted in that facility, which makes it relatively simple for their lawyers to track their cases. By contrast, the government has frequently moved separated families from facility to facility. Parents often arrive without paperwork and don’t know the status of their immigration cases. What’s more, their children’s immigration cases have been proceeding on an entirely separate track.

The situation is only about to get more dire.

The government’s latest filing indicated that within the next few days, hundreds of parents with removal orders may be reunited with their children at the Karnes detention center in South Texas.

This facility has never had to absorb such an influx of complicated cases. One attorney who has spent considerable time counseling detaining families at Karnes described an observation trip just last week saying, “I saw a level of disarray that I have not seen since my initial days at the facility when it first opened.”

The chaos playing out on the ground stems directly from the government’s choice to enact a policy of separating families with no thought or plan as to how parents and children would eventually be reunited.

The Trump administration took children, including babies, from their parents and did not return them for weeks and often many months. In fact, some children will remain separated after the court’s deadline because the government failed to track their parents, and may in fact have deported them already.

The government simply does not have ground to stand on when it argues that it cannot wait a mere seven days to remove families who are reunited, so that they can be informed of their rights before making life-altering decisions.

Amrit Cheng is a Communications Strategist with the ACLU