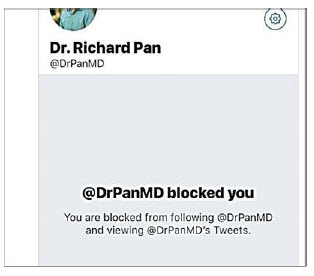 It’s novel, but it’s not the first surprise for incumbent Pan (D-Sacramento) over the past month or so. He found out in June that Berniecrat and independent candidate Eric Frame defeated several other candidates to challenge the long-term Democrat Pan in the November election.

Now Pan – like Trump – is being accused of violating the First Amendment rights of those critical of him by blocking them from his official Twitter site: @DrPanMD

Frame, his opponent in November, noted Tuesday “I know what it is like to have my free speech suppressed, or try to meet my representative only to be shooed away or passed on to a staffer.  I want to be the most transparent candidacy of all time. Unlike Dr. Pan, I want to bring accountability to a State government in desperate need of citizen input and oversight.”

The novel aspect of the case involves how social media used by government elected officials interacts with the public and voters. In Trump’s case in May of this year, Judge Naomi Reice Buchwald of the Southern District of New York ruled that Trump violated the First Amendment rights of  those who mocked the President by blocking him from his Twitter account @realdonaldtrump.

Judge Buchwald reasoned that social media platforms of government officials are the equivalent of a “town hall” – if only a virtual one – and that people have a constitutional right to be there.

“Because no government official is above the law and because all government officials are presumed to follow the law once the judiciary has said what the law is, we must assume that the president and Scavino will remedy the blocking we have held to be unconstitutional,” the judge said in her ruling.

“(A)ctions to block the Plaintiffs from https://Twitter.com/DrPanMD violates the First Amendment because Plaintiffs are prevented from expressing their viewpoints in a public forum,” argued the lawyer for A. Suzanne Rummel and Marlene Burkitt, who have been critical of Pan, and his stance on childhood vaccinations.

Pan co-sponsored a bill in 2015 that eliminated a personal exemption for vaccinations – alleged to be dangerous by some – and has taken heat by parents and others in the community who believe vaccinations could endanger children.

But blocking citizens on Twitter from interacting with him is unconstitutional, argues Marian A. Tone, a La Jolla attorney for Rummel and Burkitt.

In the Pan suit, plaintiffs note, “Public forums have always been important to the exercise of free speech.  The U.S. Supreme Court has recognized that the ‘spatial elements’ of modern public forums are very different in the current ‘Cyber Age,’ as the internet and social media platforms have dramatically changed the look of, and accessibility to, public forums.  Recognizing social media websites as the  modern public forum, the Court has noted that ‘social media users employ these websites to engage in a wide array of protected First Amendment activity.’

“Elected officials across the land maintain social media accounts, which, in many cases, are important spaces for two-way communication with public officials and between interested member of the public about governmental actions and social policies.  These social media spaces have become the modern-day public square, an open marketplace of ideas and free expression.”

The suit explains that Pan uses digital newsletters, email, Facebook and Twitter, but Twitter is his most active, and thus makes it “a modern public forum which hosts a lively exchange regarding governmental events, official announcements, legislative policies and other activities.”

The complaint maintains “Senator Pan’s efforts to block dissenters, including Plaintiffs, from his Twitter page, (is) based solely on his unconstitutional viewpoint discrimination (and) is aware of the ongoing, unconstitutional deprivation of Plaintiff’s rights.

“Senator Pan’s unconstitutional viewpoint discrimination within an online public forum is part of a dangerous trend which is only recently coming to the attention of the courts. Even where elected officials, including President Trump, have appealed the courts’ decisions, these cases have forced elected officials to ensure that their public social media sites be accessible and allow robust discussions between varying viewpoints.

“Surprisingly, Senator Pan has not responded to these parallel cases.  He still operates within the https://twitter.com/DrPanMD public forum as if it were his private domain.  Plaintiffs’ freedom of speech must be protected within the @DrPanMD public forum and they have no choice but to seek redress from the courts,” said the plaintiffs in their moving papers.