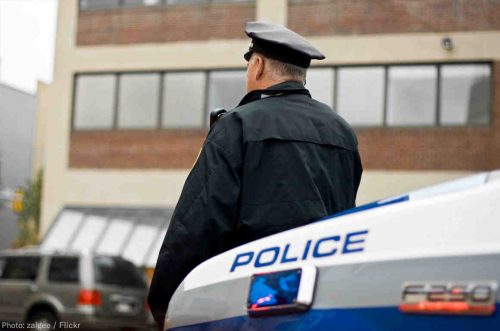 The First Amendment right to record the police is a critical check and balance for people living in a free, open, and democratic society. It promotes the free discussion of governmental affairs as well as protects the democratic process. And for some communities, it’s a vital tool for uncovering, if not deterring, police misconduct.

But Boston-based civil rights activists Eric Martin and René Pérez were afraid to record the police. Under a state wiretap law passed in 1968, known as Section 99, it is a crime to secretly record private individuals and government workers, even those on duty like police officers. Since 2011, the Boston Police Department has applied for a criminal complaint against at least nine people for secretly recording police officers performing their duties in public, and the Suffolk County District Attorney’s Office has opened numerous case files based on this felony charge as well.

Because of this fact, although Martin and Pérez often feared for their safety when openly recording police officers in public, they also knew recording secretly could subject them to arrest and prosecution. Caught between safety concerns and fear of punishment, they often chose not to record at all.

But that’s about to change.

Two years ago, the ACLU of Massachusetts filed a lawsuit, Martin v. Gross, on behalf of Martin and Pérez, arguing that they have every right under the First Amendment to secretly record police officers carrying out their duties in public. This week, a federal court agreed.

Taking photographs, video, and audio in public spaces is a constitutional right — and that includes law enforcement officials carrying out their duties. The defendants in this case argued that they could lawfully apply Section 99 to prevent individuals from secretly recording police officers performing their duties in public. In her recent ruling, Judge Patti B. Saris of the United States District Court for the District of Massachusetts called that application of the wiretap law unconstitutional.

The court explained that police officers have “diminished privacy interests” when performing their job in public, while the public has a constitutionally protected interest in newsgathering, information-dissemination, and monitoring the conduct of law enforcement officials. The parties must now submit proposed language for an order implementing the court’s decision by January 10.

The ACLU of Massachusetts has long championed the right to record the police in the public performance of their duties. In another ACLU case, Simon Glik openly recorded Boston police officers when they treated a man too roughly on the Boston Common. Glik himself was then arrested for his constitutionally protected behavior. In 2011, the U.S. Court of Appeals for the First Circuit unanimously affirmed that he had a First Amendment

right to record the police carrying out their duties on the Boston Common.

Although the fact pattern in Glik happened to involve an open recording, the First Circuit did not so limit its First Amendment ruling. Judge Saris’ ruling evokes Glik’s protection of both the open and secret recording of police officers performing their duties in public, reiterating that “the First Amendment’s protection for information-gathering has special force with respect to law enforcement officials who are granted so much discretion in depriving individuals of their liberties.”

In recent years, the exercise of this First Amendment right has changed the public’s understanding of encounters between police officers and the public. Time and time again, people’s recordings of police interactions have started national conversations about police reform and accountability, from Eric Garner to Philando Castile to Sandra Bland. As the Trump administration welcomes a new attorney general who opposes Obama-era police reform and civil rights work, all of us play an increasingly important role in keeping the local police in check.

This week’s decision will help ensure that we have the tools to do so.

Carol Rose is the Executive Director of ACLU of Massachusetts