California’s Racial and Identity Profiling Advisory (RIPA) Board released its second annual report and includes an analysis of civilian complaints and use of force data collected in 2017.

In the past year, the Board surveyed all California law enforcement agencies subject to stop data reporting.  This included information on current policies and practices regarding racial and identity proofing, efforts to enhance law enforcement-community relations and reduce biases in policing, and policies and methods for receiving civilian complaints.

They conclude: “there was little consistency in what was included in those policies across those 114 responding agencies out of 425 total agencies.”

They argue that, “Foundational to any bias-free policing policy should be the inclusion of a clear written policy and procedure regarding an agency’s commitment to identifying and eliminating racial and identity profiling if and where it exists.”

Some their recommendation includes prohibitions against racial and identity profiling, directing personnel both sworn and on-sworn to “interact with all members of the public in a professional, impartial, fair, respectful, and nondiscriminatory manner.”  Another crucial prohibition is that officers should be prohibited from using “proxies” for “protected characteristics,” these can

include: language ability, geographic location, mode of transportation, or manner of dress, among others.

The board looked at civilian complaint data that was reported to the department on an annual basis. 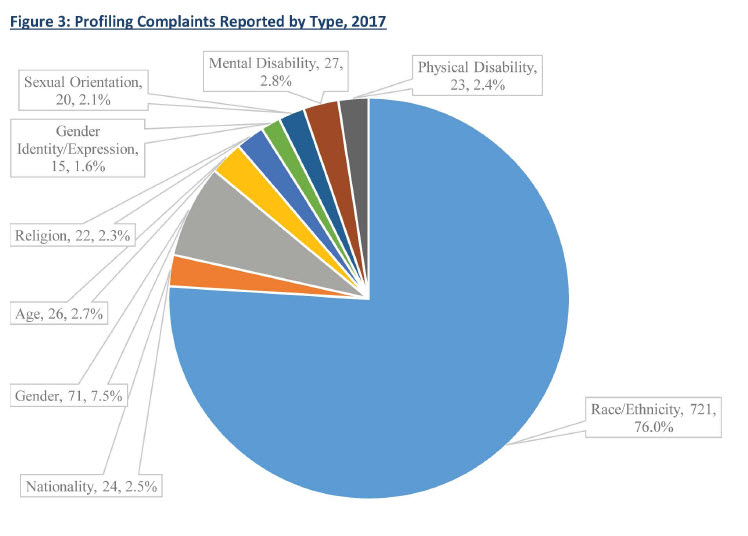 The board also looked into Use of Force.  Assembly Bill 71 (AB 71), effective January 1, 2016, “requires law enforcement agencies in California to report use of force interactions between an officer and a civilian that involve a shooting or that results in death or serious bodily injury…”

The board notes that this is the first of its kind, “making California the only state to have mandated the reporting of these types of officer uses of force.”

Under AB 71, there are four types of incidents that must be reported:

From January 1 to December 31 , 2017, law enforcement agencies that employ peace officers throughout the state reported a total of 707 use of force incidents that met AB 71 criteria.  There were 741 civilians involved in these 707 uses of force. Of these, 390 (52.6%) were seriously injured.  172 died and 51 received a less serious injury.  120 did not sustain any injury and 8 it was unknown due to them fleeing the scene.

In addition, 516 of the 741 (69.6%) were reported to have assaulted an involved officer or officers during the incident.  In addition, 487 of them were taken into custody after the use of force incident.

Here is the racial breakdown of use of force incidents which is further broken down by lethal and non-lethal force. 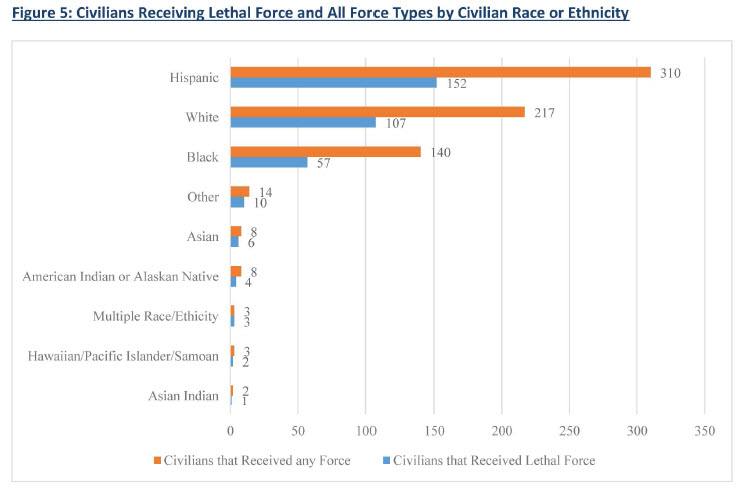 One early study from NYPD found that “police shootings steadily decreased after the department implemented a policy regulating shooting discretion in 1972.”  Importantly, those changes did not result in the increase of officer injury or death.  There was similar analysis out of Philadelphia.

The work of Sam Sinyangwe, who presented his finding at a June 2018 meeting on the relationship between use of force policies and observed lethal use of force.

He found the following:

In addition, “A more recent 2017 assessment of the Seattle Police Department by the Seattle Police Monitor revealed a nearly 11 percent decrease in use of force incidents after the department implemented a policy with clear directives and prohibitions on certain types of force used.”

In a statement from AG Xavier Becerra, he stated, “The Board’s recommendations will help make our law enforcement agencies more transparent and promote critical steps to enhance, and in some cases, repair the public trust. I applaud the Board’s efforts to continue fostering trust between law enforcement and the communities they serve. We look forward to continuing this important work to make all California communities safer.”

Share:
Tags:AB 71Lethal ForceRacial ProfilingUse of ForceXavier Becerra
Previous : Supreme Court Denies Effort to Block Access to Police Records
Next : What Does the Left and Right Agree On Nationally? Housing