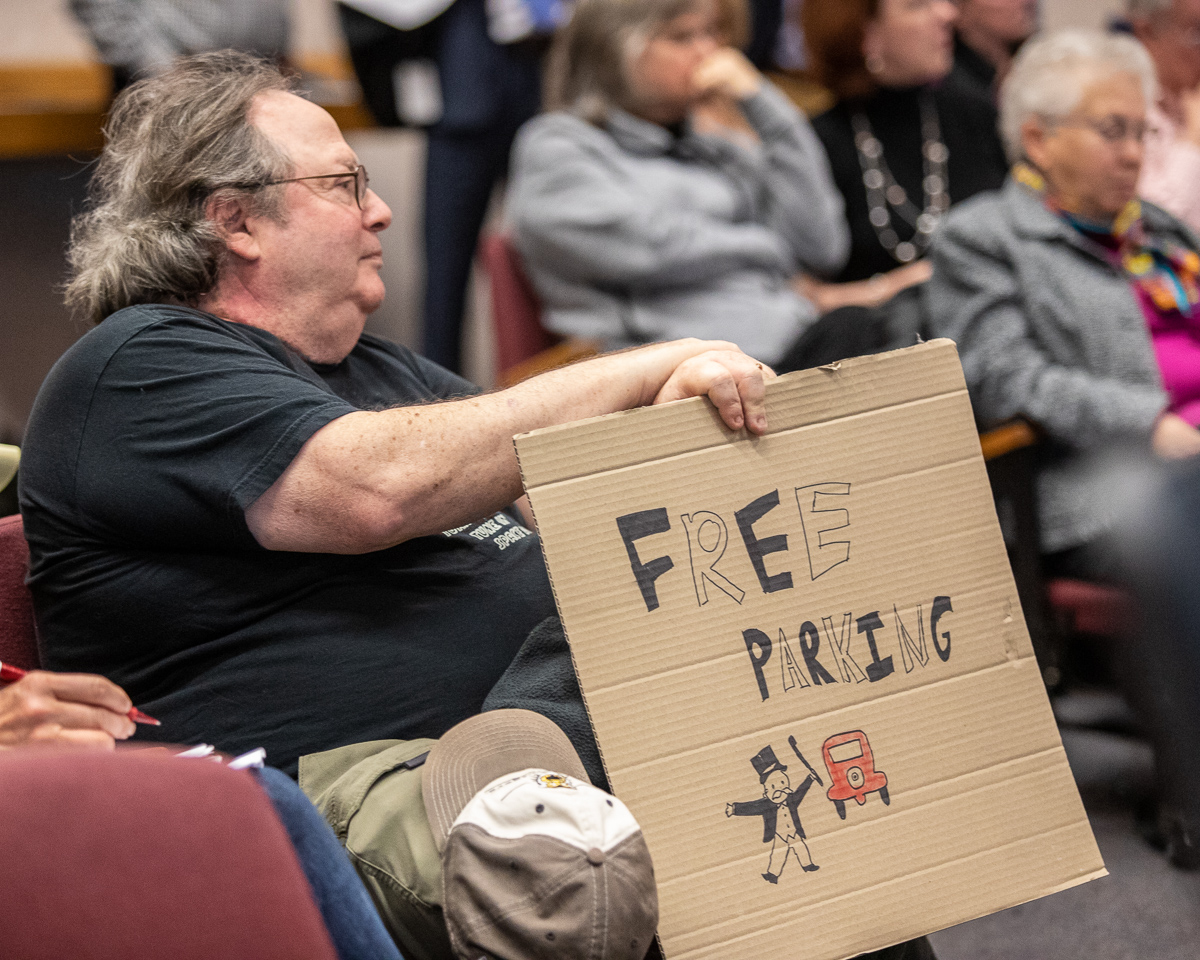 How many times have we seen council, in their desire to make a decision on a controversial item, go late into the evening passing midnight, one, and on a very few occasions, even three?  I have seen those decisions made at such an hour – often the decisions are poor ones that need to be revisited.  Given that it was 11 by the time the council even got done with public comment, waiting a few weeks made a lot of sense.

By continuing the meeting, they don’t make the same mistake that often gets made – they have to listen to two hours of public comment and then come back two weeks later and listen to two more and have to go through the whole thing again.

Public opinion is running heavily against this proposal.  By one estimate, about 70 percent of the people who spoke on Tuesday were against paid parking.  Breaking it out though – there were businesses and business owners concerned that paid parking would keep their customers away and there was a contingent from Davis Community Church concerned about the impacts of pushing free parking out there and how it would impact their congregation’s access to parking.

What I find most interesting is the disconnect between the science and people’s fear of what will happen if paid parking is opposed.  If you listen to the Chamber or business owners, they will take about a few factors here – they fear that adding paid parking will drive customers to go somewhere else, they argue that paid parking goes against the small town spirit of the downtown, and they hear from their customers strong opposition.

The science paints a very different picture, as I will explain shortly.  But perhaps one reason I have never had a problem with paid parking downtown was that’s what I grew up with in San Luis Obispo.  You had choices – you could put your coins into a parking meter and access street-level parking, you could get 90 minutes free and use a parking garage, or you could park outside of the metered area and walk.

While I do not discount people’s concerns, I think for a good number of people they are fearing change rather than analyzing how that change is likely to work.

The science here is overwhelming and the explanation from the consultants was really good.

The first problem is that during peak hours there simply is not sufficient parking in the Davis Downtown – at least not in the Southeast Quadrant where this change is proposed.  The numbers do not lie.  The average during peak hours is about 91 percent full – whereas you want it to be in the 60 to 80 range.

Now what I don’t understand is why business owners seem okay with that status quo.  Because that is hurting their business.

The second point is that if the city does this correctly, the fees are not about generating revenue, they are about regulating that traffic flow.  The consultants make the point that if your parking availability is too high, you lower the fee and if it’s too low, you raise the fee – both done slowly and in small increments until you find the sweet spot.

The contrast between the science laying out how this stuff can work and people operating out of fear and uncertainty was striking.  While I respect the views of the businesses, they are still anticipating the impact of change – whereas the reason you hire consultants is they have the analytical and broad-based experience to be able to apply principles and best-practices developed in other locations and bring them here.

With that being said, there might be avenues for some compromise.

One of the possible avenues for compromise is looking into when to implement the paid parking.  Right now they are talking about 10 to 10 – every day.  While I agree with the consultants that this is not about generating revenue, in essence the time considerations factor revenue into the equation.

While the estimates are that this would generate slightly positive revenue over the course of a ten-year period, money that they say would go into a specific fund rather than the general fund, if you look at their proposed impact of limiting the time considerations, you see that each limitation is expected to limit the small amount of revenue this would generate.

What they have recommended is fifty cents per hour off-peak and one dollar an hour at peak.  But another possibility would be to change that calculation so you charge more during peak hours and nothing during off-peak hours.

That would help to manage the parking flow when spaces are at a premium – encouraging people to utilize less heavily accessed parking areas, but leave the system as it is now during off-peak hours.

We already have a sense for how this would work anyway.  We know that the E Street parking lot, even though it is one of the few paid parking lots, mirrors the overall trend in parking – people would rather pay a small amount for close-in access than save a few dollars.

But there is no reason why you couldn’t play with that balance a little bit to make parking in the SE quadrant free except during peak hours.

The other idea that I think downtown businesses and the Chamber should explore is the idea I presented on Sunday – which is to deal with what appears to be the main culprit here – employee parking.  The consultants estimate that as much as one-quarter of the parking is taken up with employees.  Imagine this – if your average peak hour is at 91 percent capacity in the SE and you get the employees out of parking there, you’ve reduced the parking capacity to the 60 to 80 percent range without creating any paid parking.

The question is: can employers enforce that?  I believe they can.  If the Chamber really believes that this move is bad for business, they should work with businesses to fix the employee parking issue and they could ask the city for a six-month period to see if they can achieve this.

Should we add another parking supply area?  I’m ambivalent on that.  On the one hand, if we are looking to expand and enhance the downtown, we are going to need to do that.  I think some of the densification proposals coming out of the DPAC (Downtown Plan Advisory Committee) discussions will have to have internal parking options built in.

As things stand now, we don’t need it.  We can effectively manage our parking with paid parking.  The problem is not lack of supply, it’s about poor distribution.

With that said, I think the council, looking at the consultant reports and data from other communities, would be best served by biting this bullet.  Just as we saw with E Street parking, people may have a transition period, but they will adjust to the new world and this will not mark the end of the Davis downtown.

64 thoughts on “Commentary: Council’s Decision to Delay Decision on Parking – the Good and the Bad”