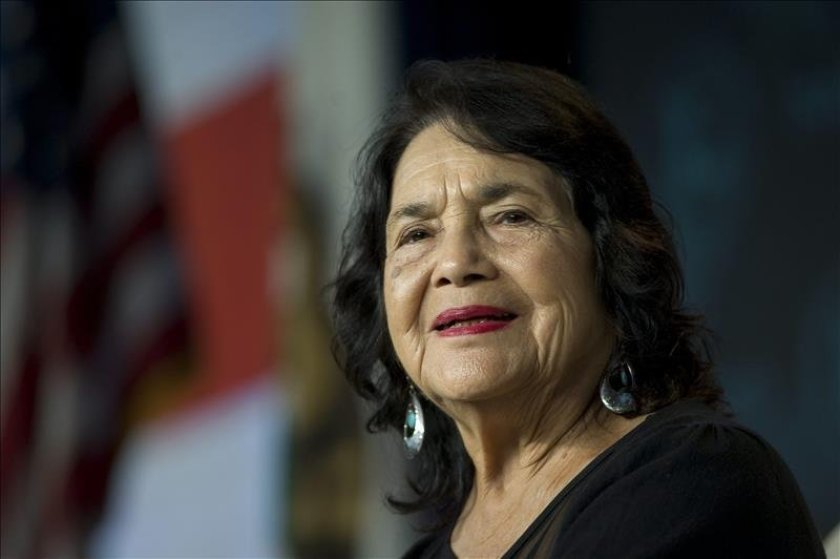 While much of the attention in recent years has focused on African Americans killed in disproportionate numbers by the police, longtime civil rights leader Dolores Huerta, in a recent op-ed in the Sacramento Bee, calls attentions to Latinos disproportionately killed by police.

Ms. Huerta, co-founder of the National Farm Workers Association (now United Farm Workers) along with Cesar Chavez, points out that while it has “only been in recent years that we, as a society, have begun to awaken to the fact that more than a few police officers abuse their power,” she herself is no stranger to this experience.

Back on September 14, 1988, she writes, “I was distributing grape boycott literature outside a San Francisco hotel when I was physically assaulted by a San Francisco police officer. He sent me to the hospital with broken ribs and a ruptured spleen.”

She is supporting AB 392 “to make sure police officers use the highest power they have – the power to kill – judiciously and with the utmost respect for human life and human rights.”

Ms. Huerta writes: “As a working-class woman of color, I know that my experience 30 years ago wasn’t rare, but rather part of the daily struggle shared by so many other people. For Latinos, as with

African Americans, there is a long history of distrust towards law enforcement.

“This has been cemented by years of mistreatment, aggressive policing and violence, as well as their overzealous participation in the deportation of our loved ones. It’s no wonder that, when young men of color see police, their first instinct may be to run.”

She notes that California “has made some strides to improve police accountability, help people feel safe in their own communities and limit local law enforcement’s complicity in deportations,” but she argues “what does it say about us as a state if we can’t even establish a common-sense standard for when police officers can take someone’s life?

“This is a matter of life and death,” she writes.. “There’s no turning back the clock when officers shoot and kill someone.”

She argues: “How many more people must be killed – and how many families must be shattered – before we take the issue of police shootings seriously? We know there are solutions that can work to keep both our communities and our officers safe.”

Research shows that establishing a higher standard for when officers can kill reduces use-of-force incidents.

For example, “the very same department that employed the officer who physically assaulted me now has a stronger use-of-force policy in place. After changing its use-of-force policies in 2016, the San Francisco Police Department trained its officers in this new policy and ways to de-escalate situations.”

As the result of these changes, the San Francisco Police Department has seen a 35 percent decrease in overall uses of force from 2016 to 2018.

She argues: “The department’s adoption of crisis intervention training, which trains officers to use communication and de-escalation tactics, was a game changer. Instead of shooting right away, officers have learned to engage in conversations, while maintaining a safe distance and continuing to protect themselves.

“Why not make this change in policy and training state law?” Dolores Huerta asks.

Assembly Bill 392, introduced by the Chair of the Legislative Black Caucus, Assemblymember Shirley Weber (D-San Diego), “would help California do precisely this. It will make sure that officers only use deadly force when necessary to prevent immediate harm to themselves or others and require officers to de-escalate whenever possible. If the bill is passed, every police officer in the state will be trained to uphold this new standard and (be) equipped with the tools to help cool down situations before they turn deadly.”

She concludes: “I call on the California Legislature – and in particular the members of the Latino Legislative Caucus – to fulfill their responsibility to act in the best interest of their constituents and pass AB 392. I also call on every Californian of good conscience to use their voice and power to make sure our state laws reflect the value we place on human life, humanity and basic human rights.”

Share:
Tags:AB 392Dolores HuertaPolice Shootings
Previous : Letter: Astound Contract is Penny Wise and Pound Foolish
Next : My View: Some Are Saying the Council is Out of Step – Let’s Have a Look