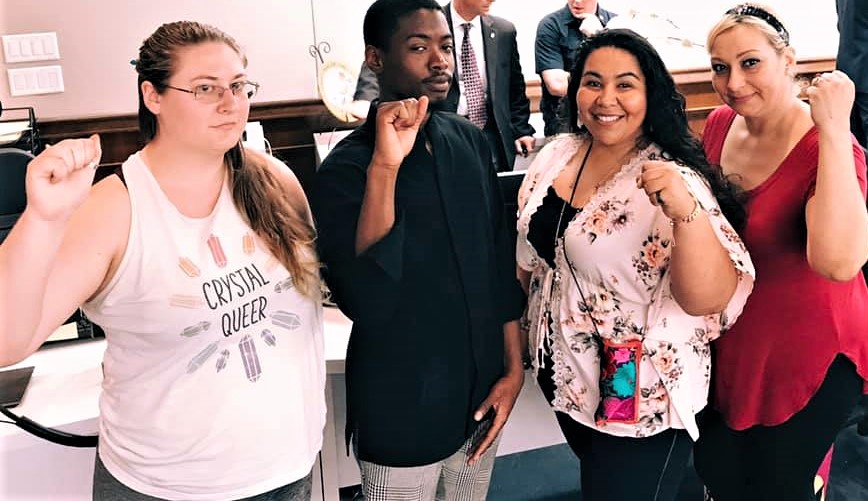 SACRAMENTO – Sometimes it comes down to a matter of trust – especially in politics – and seniors, disabled, a cancer patient and homeless were told to take the word of Gov. Gavin Newsom’s office late Wednesday after a more than five-hour occupation of the outer office of the state’s chief executive.

The governor’s staff – meeting in person with a group of about 50 people – swore that Newsom supported a trio of bills that would stabilize quickly rising rents and provide housing security.

And they swore their boss had made rent control a major part of his platform, and was doing all he could to convince lawmakers – even those from his own party – to send him something to sign.

Finally, after the Capitol closed for the day, the governor’s staff promised to allow protestors to stay in the outer office all night, with no threat of arrest.

There were caveats in the last promise, as demonstrators soon found out. They’ll know more about the first two promises when the vote is tallied on two of the three measures that will be heard

before the Assembly Housing Committee Thursday.

As to the free use of the governor’s outer office, demonstrators learned that they could stay there but without the use of bathrooms, or access to food or water.

They did get three trash cans to use for “personal bodily function” reasons, but a security camera watches over the room along with security guards so there are privacy concerns.

With those prospects – no bathrooms among them – most of the 50 people holding the peaceful vigil, which included young children, disabled seniors and at least one cancer victim, chose to leave.

Four people did stay – the cancer patient was one – despite the unsanitary conditions.

Tuesday, the tenants in urgent and threatening housing conditions, as they describe themselves, staged hit and run, peaceful sit-ins in a couple of lawmaker offices or entrances to their offices in an attempt to get some commitment to vote for the rent stabilization packages.

HAPPENING NOW: tenants in dire housing conditions have chosen to SIT IN at Assemblymember Maienschein urging him to commit to a YES vote on AB 36 to expand rent control and AB 1482 to stop outrageous rent increases on Thursday's Assembly Housing Committee meeting. The families here are facing homelessness and truly dire circumstances- they have no other choice but to stay here and urge Maienschein to do the right thing and commit to yes vote on Thursday. You can support the tenants be calling Maienschein's office to show your support for the #KeepFamiliesHome bill package at (916) 319-2077

HAPPENING NOW: tenants in dire housing conditions have chosen to SIT IN at Governors office urging him to commit to support AB 36 to expand rent control and AB 1482 to stop outrageous rent increases at TOMORROW’S Assembly Housing Committee meeting. The families here are facing homelessness and truly dire circumstances- they have no other choice but to stay here and urge the Governor to do the right thing and commit to help support our bills.#KeepFamiliesHome

AB 36 (Bloom) and AB 1482 (Chiu) would stabilize rents and provide housing security. The third bill, AB 1481 (Bonta), will be heard in the judiciary committee on April.

Melvin Willis, a Richmond City Council, has spent the last few days supporting the tenant rights group, and said he’d risk arrest in the governor’s office if it came down to it to find justice for them.

“All of these bills are extremely important in this displacement crisis. AB 36 is the most important. Los Angeles, for instance, wants to expand its rent control but LA is limited because of (state laws),” Willis said, adding “AB 36 is the last hope for many people to keep a roof over their heads.”

The stories of those being displaced or who have been displaced by unfair rents are heart-wrenching, as Gov. Newsom’s chief of staff Ann O’Leary acknowledged when she spoke to the packed outer office group.

“The governor asked me to come out here personally. He knows so many are struggling with rent. He asked the Legislature to send him a good rent package (and) he’s made clear this is his priority,” said O’Leary. She said Newsom has met with legislative leaders about the rent package and told them he wants something to sign.

“A rent stability bill package on his desk is what he wants,” said O’Leary, although noting – under withering questioning – the the governor is not in the Legislature, which is “a separate branch of government.” She admitted that the administration is “aware” that 40 percent of Californians are renters.

Those participating in the sit-in include Mari Sanchez, a homeless mother of five recently diagnosed with pancreatic cancer living in National City, in the San Diego area.

“I am homeless now with two special needs kids, but I worry about who’s taking care of the seniors,” said Sanchez.

Elsa Stevens, a senior citizen who lives in the Heritage Park Apartments in Richmond but is exempt from Richmond’s rent control protections because of current state laws that limit what local governments can do, said her and others like her face homelessness.

“If AB 32 does not pass, you’re evicting many of us,” she said, explaining how modest rent increases in a retired, low cost community suddenly became a nearly 20 percent increase in two years, which she said is untenable to older residents living on social security.

Others protesting include Barbara Pinto, a senior citizen from San Diego who is fighting being displaced for the fourth time in four years by another large rent increase; Gloria Cortez, a mother of five in Los Angeles, who was displaced by a large rent increase and has been homeless for the last year and a half; and Sylvia Venegas, a mother of two from Los Angeles/San Fernando Valley fighting an imminent eviction from one of the nation’s largest landlords – Blackstone’s Invitation Homes.