SACRAMENTO – Chanting “Shame” and “Close the Camps,” nearly 300 people packed the entrance to the Federal Courthouse here Tuesday to call for the immediate closure of border immigrant detention camps, including those caging children – more than 100 other actions were held in California and around the nation Tuesday.

After the more-than-an-hour rally, several dozen demonstrators briefly blocked the street to a busy freeway onramp. They delayed traffic for six minutes to mark the six children who have died.

But in Sacramento, the survivors of other U.S. concentration camps nearly 80 years ago spoke out strongly against the wrongdoings along the border today. Their voices were poignant and chilling.

Ironically, the federal courthouse is named after former Rep. Robert Matsui, who was just six months old when he and about 120,000 Japanese – most of them citizens – were put in concentration camps in 1942 after Japan attacked Pearl Harbor.

“It’s happening again,” said Josh Kaizuka, co-president of the Florin Chapter of the Japanese American Citizens League, referring to that mass incarceration of Japanese at the beginning of World War II.

“Seventy-seven years…no one stood up. Racism, and fear mongering resulted in 120,000 men, women and children being incarcerated. We can’t stand by (now) and do nothing. There weren’t people like you to speak up and stand up (77 years ago). But we’re here today. We stand with you because it’s wrong. Close the camps,” Kaizuka, a Sacramento attorney, said to the crowd.

“Not many people in the Japanese American community don’t have a relative or friend who was incarcerated. After the (presidential) elections we saw what was coming. We stood with our brothers and sisters. Caging of children? They don’t need toothpaste, they don’t need soap? Resistance is not futile, and that’s why we’re here,” he said.

Kaizuka was followed by Marielle Tsukamoto, past president of the JACL and Christine Umeda, both incarcerated in the WWII concentration camps at about five years of age. Umeda was joined Tuesday by her granddaughter.

“I was taken from my home at five, most of us were children,” said Tsukamoto. “No one came to say it was wrong in 1942. They were too afraid to speak out. We have learned a hard lesson. The true American is willing to speak out and be counted.

“We need big numbers and must multiply the energy and commitment and heart we are experiencing here,” she said. “Don’t go home and watch TV and forget the children on the cement suffering. Never again.”

Pablo Morales of NorCal Resist was direct and outspoken about what needs to be done.

“We need direct action, driven by hope. The evil must stop now. I see an army here ready to fight. I say no more,” said Morales, who came to the U.S. at the age of 13, and described the “road to justice” as a “long dark” one.

“We will not win with spreadsheets or conference calls,” warned Morales. “We need to be committed to fight together. We must be willing to die. I’ll be damned if we allow this administration kill (any more) children.”

The demonstrations across the county Tuesday sprung up – even on a holiday week – after reports from members of Congress confirmed that – in their visits to border detention centers – that children were being denied soap and toothbrushes, crowded into unsafe conditions and separated from their families, subject to cruel treatment, and even being told to drink toilet water..

Protest sponsors said the conditions are the byproduct of an intentional strategy by the Trump administration to terrorize immigrant communities and criminalize immigration—from imprisoning children in inhumane conditions to threatening widespread raids to break up families to covering up reports of immigrants dying in U.S. custody and abuses by ICE and CBP agents. 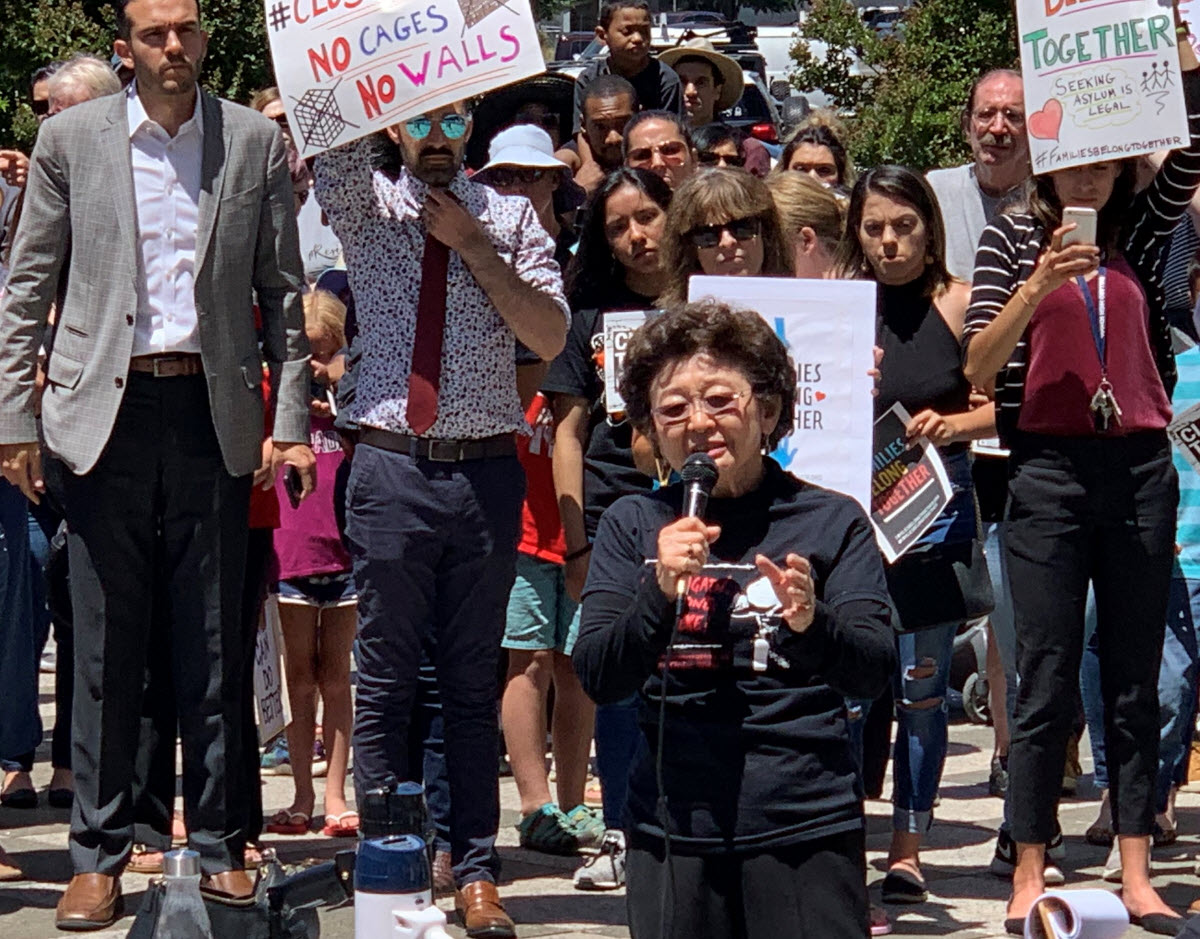 Share:
Tags:Close the CampsImmigrationProtest
Previous : Food As Medicine
Next : 300 Come to Davis to Demand Garamendi Help Close the Camps