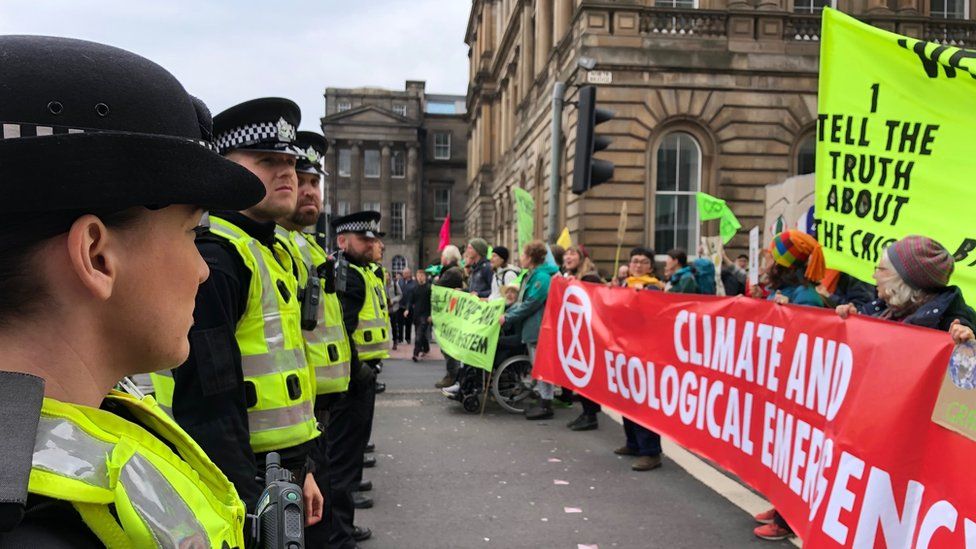 Next Monday, the United Nations General Assembly convenes for a climate summit during which countries will describe their plans for slowing global temperature rise. In The Nation today, Mark Hertsgaard writes that this week leading up to the summit “may be the most consequential week in climate politics since Donald Trump’s surprise election as president of the United States in 2016.”

That election led to the announcement that the United States would withdraw from the Paris Agreement, and Trump is not expected to attend next week’s summit. The challenge facing other signatories now is how to achieve the agreement’s necessary goal of keeping temperature rise “well below” 2 degrees Celsius, and striving for a safer 1.5 degrees.

(Hertsgaard explains how, thanks to the agreement’s provisions, the Trump administration’s decision to withdraw from the Paris Agreement cannot actually take effect until Nov. 4, 2020 —a day after next year’s presidential election.)

This Friday, people around the world plan to take to the streets for a youth-led global climate strike. Last week, Houston, on the day of the Democratic presidential debate, was the site of a smaller protest. Twenty-two people set up a demonstration targeting the Texas oil industry. Half of them rappelled off a bridge to block the Houston ship channel while the others assisted from above.

That ship channel is the largest in the United States. The firms operating at the port include some of the largest exporters of crude oil and natural gas liquids in the country.

The protesters, affiliated with Greenpeace USA, shut down the channel for several hours and obstructed traffic on the bridge above. That closure did not have a permanent effect on the channel or the shipping schedule, a Port of Houston spokesperson told the Chronicle, but the protesters real goal was to draw attention to fossil fuels and the climate crisis as the 10 leading candidates for Democratic presidential nominee debated.

The protest was small and did not significantly affect operations at the ship channel. According to reporting from the Houston Chronicle, the Harris County sheriff’s office had originally said they would not remove protesters. But by late afternoon, law enforcement began making arrests and ultimately arrested 31 people.

Faced with a choice about whether to press charges, prosecutors from the Harris County district attorney’s office charged the protesters with misdemeanors and felonies. The felony charged is new: the obstruction of critical infrastructure, created by a law that went effect on Sept. 1. Hours later, federal prosecutors brought charges as well. The protesters were jailed from Thursday through Saturday morning and are scheduled to appear in court today.

The state felony charge may be new, but it is familiar to people who have followed the criminalization of climate activism since the Standing Rock movement. Last August, following the arrest of three “water protectors” in Louisiana, the Daily Appeal looked at how states were using anti-protest laws to protect oil pipelines and criminalize environmental activism. Louisiana was one of a number of states that adopted “critical infrastructure” laws after Standing Rock. The law is currently being challenged in federal court.

Laws like those passed in Louisiana and Texas have been spreading across the country since Oklahoma passed such a law in 2017. The American Legislative Exchange Council (ALEC), a conservative group of state legislators backed by corporate sponsors, patterned a model Critical Infrastructure Protection Act in January 2018 after Oklahoma’s law. This year alone,  seven states, including Texas, passed a version of the law pushed by ALEC.

The Texas law makes “impairing or interrupting” pipeline construction a felony, punishable by up to two years in jail and a $10,000 fine. Anyone alleged to have “intent to damage or destroy” a pipeline facility, could face a third-degree felony and up to 10 years in prison. And any organization involved could face a $500,000 fine.

“It’ll be more difficult to give underrepresented communities a voice now because of this,” Frankie Orona, executive director of the Society of Native Nations told The Guardian in July.

The bill was even harsher in its original form, as the Texas Observer reported, but organizers testified at a public hearing, sent thousands of messages opposing the bill to lawmakers, and, as in the case of a group of indigenous activists, appeared in the House gallery the day of the vote with a banner reading: “Kill the bill, save our land. Protectors are not criminals.” Robin Schneider, director of the Texas Campaign for the Environment, told the Observer that these actions pressured sponsors to decrease the law’s penalties.

Ultimately, the bill’s passage in Texas, a state where the gas and oil industry reigns supreme and where almost a third of lawmakers are members of ALEC, did not come as a surprise. But as Schneider pointed out, it is shocking that not a single Democrat was willing to filibuster the bill.

On the floor of the state Senate, Brian Birdwell, a sponsor of the bill, invoked prosecutorial discretion as a moderating influence against the harsh penalties, reported the Observer. “These offenses, the penalties are ceilings, not floors,” Birdwell said.

For people who have followed the history of mass incarceration in the United States, the role of prosecutors and prosecutorial discretion in it, and Harris County District Attorney Kim Ogg’s instincts toward incarceration and extreme punishment since her election, this, of course, is no comfort.

2 thoughts on “Faced with Climate Activism, Law Enforcement Chooses to Crack Down on Protesters”