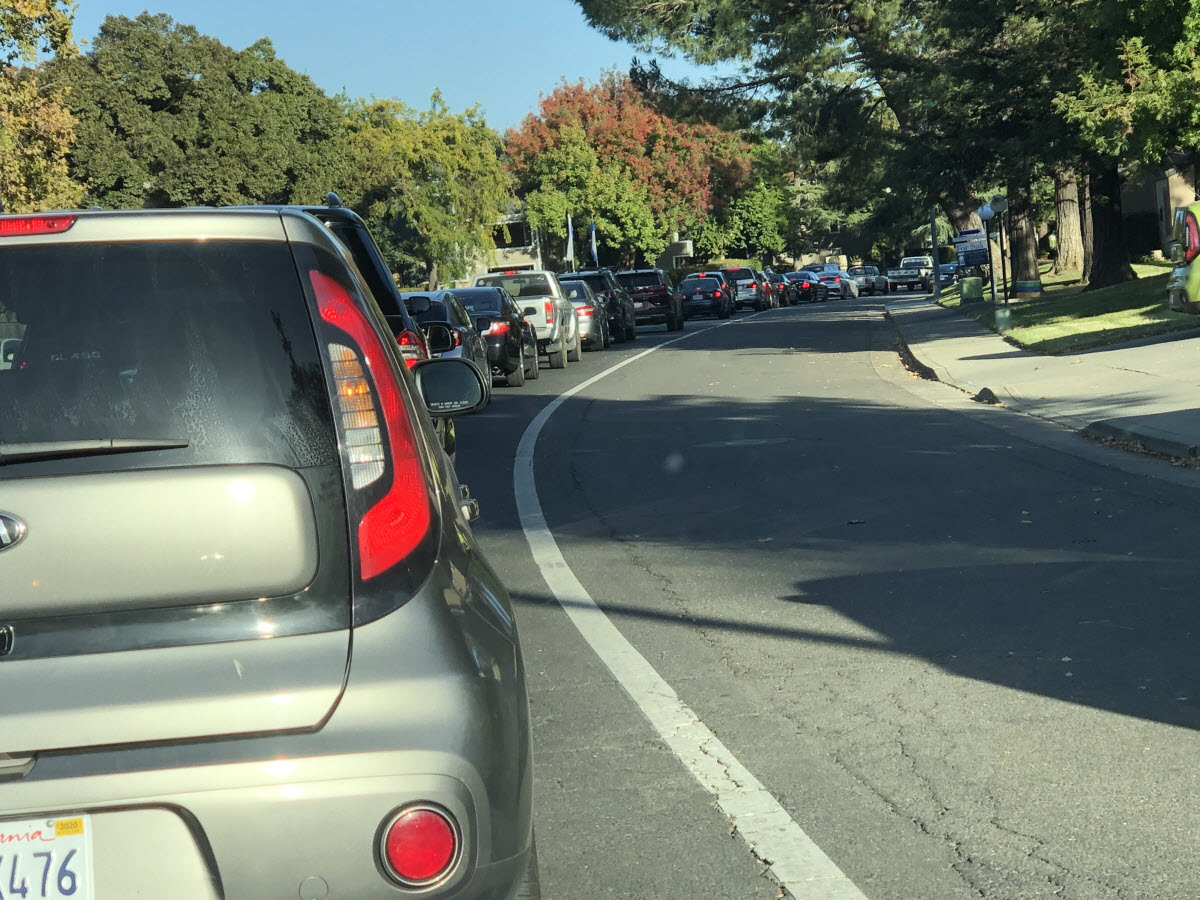 A lot of blame got thrown the way of the city on reconfiguring Mace Boulevard, but as I pointed out in the spring, traffic headed east and south on Covell onto Mace from Harper was backed up practically to the Junior High on Thursdays and Fridays, and there is no earthly way you can blame that on the reconfiguration of Mace far to the south.

This Friday may have been the worst I have seen – and I was stuck right in the middle of it.  The problem I had was getting from downtown to Target to Montgomery, to Davis Diamonds and then somehow home in South Davis on the very eastern part of Cowell.

What would normally take maybe 10 minutes took over half an hour.

First I made the mistake of trying to get to Target, which is normally not a problem on a Friday afternoon.  But by four, the traffic backed up from Mace all the way onto Second Street basically to the Frontier Fertilizer site.  Fortunately for me, the road splits into two lanes shortly thereafter and the left lane was clear (for once people didn’t try to get into the left lane and merge back – one of my suggestions to the city is to make that move impossible during times of high traffic).

I then had to get to Montgomery to pick up two of the kids.  To avoid the Mace congestion, I drove back on Second Street to get to Fifth Street, and attempted to make a left onto Pole Line and go over the overpass.  Normally a quick jog.  But the traffic was ridiculous.

It took five light cycles to make the left turn onto Pole Line.

Then the overpass was completely congested and it took another ten minutes to get over the overpass.  I got to the school, and then dropped my daughter off at Davis Diamonds.

Traffic was fine again until I hit Cowell, right around the spot where Daniel Marsh killed his two victims (sorry that’s how I remember  that spot).  Normally even in the afternoon, Cowell has been

clear, even if it is backed up on Mace – but not on Friday.

It took another ten minutes to go through intersection – and it would have been far worse to go left rather than straight.

For all of the complaints about the reconfiguration of Mace, the reality is that Mace isn’t the problem.  The problem is I-80.

Now everyone has been blaming the Waze app, which redirects traffic starting about Dixon to bypass freeway congestion by going the back county roads – which directs people back to the freeway by making a left on Mace and reentering the freeway.

In so doing, the app is inadvertently adding to the congestion and creating a cascading effect across the town in Davis.

The app is probably an easy culprit, but considering Davis has a large volume of people who commute in and out of the city each day, the culprit may also just be that I-80 is bad and the volume of traffic trying to get out of Davis is sufficient to cause backups.  I make this point because it is not clear that we have sufficiently studied the issue.

What I do know is that there are two primary problem points that originate at I-80 that are ultimately to blame.  The first congestion point is at UC Davis.  Whoever designed I-80 frankly needs to be tarred and feathered because, for reasons that make no sense, I-80 widens to six lanes just before Davis and then drops back to three.

The result of that is traffic, starting perhaps as early as 2 pm even on a weekday, will back up as the lanes reduce.  That problem is what is leading apps like Waze to attempt to divert traffic elsewhere.

The second problem is at the causeway.  At first glance, you have to ask yourself why traffic would back up so much at the causeway – after all, the lanes do not further reduce.  During peak hours, you are getting a volume of traffic coming on at Mace but another volume of traffic getting on down the road at East Chiles.  The result is that more traffic is funneled onto the road at those two points, creating another slowdown.

Part of this is actually part of the same system.  If you divert traffic at Dixon off the freeway, that traffic is then getting back on the freeway at Mace or East Chiles, creating the second bottleneck.

I know a lot of people see the solution as somehow convincing Waze not to redirect traffic through Davis or perhaps find a way to eliminate the throughway from the county road to Davis – the real solution in the long term is going to be the Caltrans project to fix the I-80 corridor and, while they are apparently looking at widening the causeway, figuring out a better way to deal with the bottleneck at UC Davis might be the more advantageous move.

Until that gets fixed, we are going to have to get used to traffic volumes especially on Thursday and Friday from about 4 to 6 pm or so.

45 thoughts on “Monday Morning Thoughts: Friday Traffic Was a Bear and It’s Getting Worse”