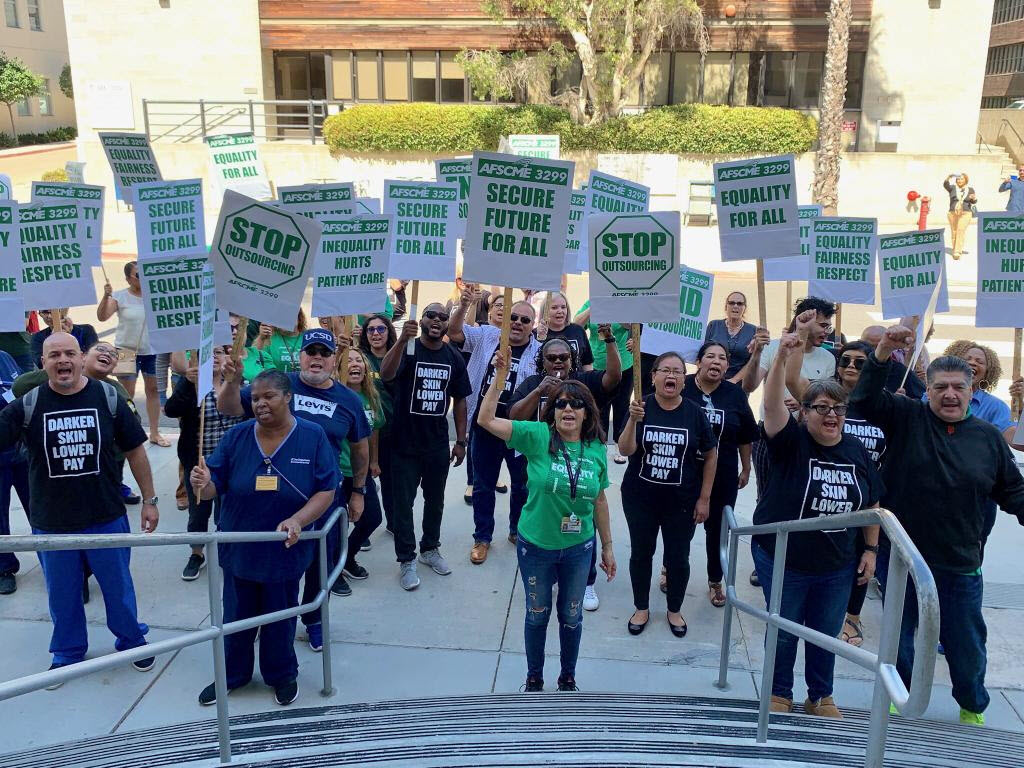 (From Press Release – AFSCME) — According to documents filed with the State Legislature, the University of California has increased its spending on outsourcing of campus service and patient care jobs normally performed by university employees by as much as 52% since 2016.  This is nearly three times the rate of growth in direct university employment for similar jobs over the same period.

In analyses published by State Legislative committees considering reforms to University contracting practices, UC said it spent just over $345 million (1) in 2016 to outsource jobs normally performed by AFSCME 3299 represented UC employees–everything from custodial, food service and transportation services, to nursing assistants and patient billers in 2016.    In August of 2019, UC notified state legislators that it now spends $523 million on these same services—a growth rate in outsourcing that is roughly three times larger (2) than its direct employment growth for the same jobs.

“The sad fact is that UC has accelerated the practice of replacing middle-class careers with less stable, lower wage contract jobs under the leadership Janet Napolitano,” said AFSCME 3299 President Kathryn Lybarger.  “This has only served to create more poverty and less social mobility for thousands of California’s most vulnerable workers.” 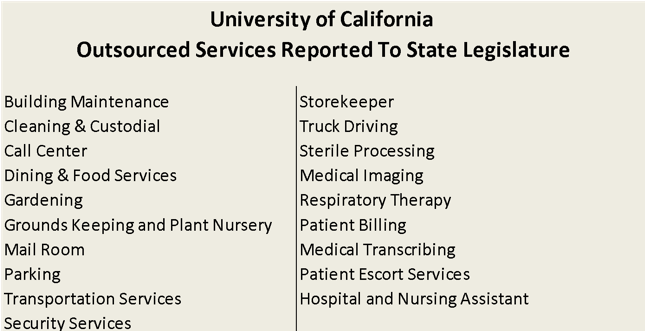 Earlier this week, Local 3299 announced that it has filed six Unfair Labor Practice charges against the university, alleging that UC has violated state law by secretly extending and expanding the scope of its outsourcing agreements without notifying affected employees.  On October 25, California’s Public Employment Relations Board announced that it had found sufficient evidence to issue a formal complaint against UC on one of the charges after expediting its review of that charge.

Recent research has found that the workers being adversely affected by UC’s outsourcing practices are disproportionately black women and other people of color.  As direct employees, these workers’ starting UC wages are already as much as 23% less than white men doing similar jobs, and as outsourced workers, they are paid as much as 53% less than regular UC employees. Research

has also shown that African Americans at UC face a higher risk of involuntary job displacement, and their share of UC’s directly employed service and patient care workforce dropped by 37% between 1996 and 2015.

A 2017 State Audit, entitled “The University of California Office of the President- It Has Not Adequately Ensured Compliance With Its Employee Displacement and Services Contract Policies,” exposed additional problems with UC’s outsourcing practices under Napolitano’s tenure.  These included the University extending or renewing contracts without competitive bidding and failing to follow its own policies for displacing employees in favor of contractors.

“With the pattern growing so dramatically alongside consistent reporting about full-time contractors working at UC for years on end, it’s clear that this is not about short-term gigs or unplanned contingencies,” Lybarger added.  “President Napolitano has led a system-wide effort that shortchanges low paid workers—and disproportionately women and people of color. The university has an obligation to do better by these workers and all of California.”

Share:
Tags:AFSCMEOutsourcingStrikeUniversity of California
Previous : Conflict between Neighbors Leads to Brandished Firearm Altercation
Next : Students Beyond the Stats: A Safe Space for Formerly-Incarcerated and Systematically-Impacted Students