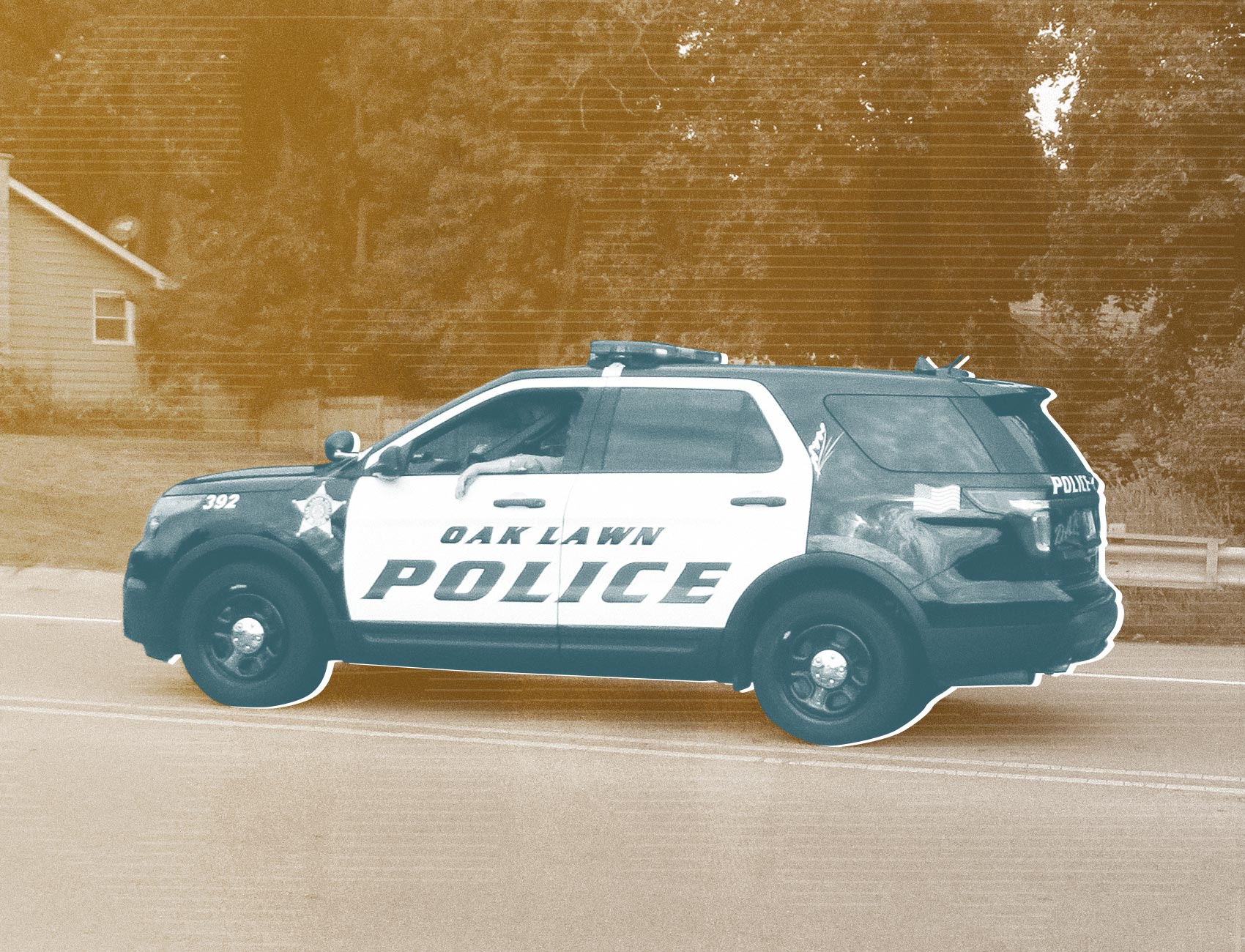 According to a complaint, police in Oak Lawn, a suburb of Chicago, subjected Tylus Allen Jr. to invasive searches, all of which turned up nothing.

A federal civil rights lawsuit alleges that police in the village of Oak Lawn, a Chicago suburb, violated a man’s constitutional rights by performing illegal searches of his vehicle and person, including strip-searching him and ordering a doctor to perform a digital rectal exam on him.

The complaint, filed on Dec. 2 in the U.S. District Court for the Northern District of Illinois, says the actions taken by police officers were “willful, wanton, malicious, oppressive and done with reckless indifference” to Tylus Allen Jr.’s rights under the Fourth and 14th Amendments.

“Other than having a badge and a gun, they had no legal authority to do that,” Edward Fox, one of Allen’s attorneys, said of the officers.

According to the complaint, police pulled over Allen, a 29-year-old Black man, on Dec. 2, 2018. He complied with the two Oak Lawn officers who ordered him out of his vehicle. Allen’s attorneys say that according to a police report, the officers suspected Allen of concealing drugs. They searched him and his vehicle, without his consent, the complaint alleges. The police report alleges officers found “small amounts of cannabis strewn across the floor” of the car, his attorneys said, but the attorneys noted in an email to The Appeal that officers did not photograph or further document the drugs, nor did they charge Allen with possession. The officers then called for a K9 unit from the nearby city of Burbank. The dog “did not recover any contraband or evidence of criminal activity” on Allen or in Allen’s vehicle, the complaint states.

The Oak Lawn officers arrested Allen and took him to a police station, made him undress, and subjected him to “an intrusive physical search,” including of his buttocks, the complaint reads. When nothing turned up in the strip search, the officers told Allen to “remove any contraband from his body cavities,” the complaint reads; Allen told officers he was not hiding any contraband.

Police then called an ambulance for Allen, who was otherwise not in need of medical assistance. At Advocate Christ Medical Center, police lied, the complaint says, and told a doctor that they had found drugs in Allen’s vehicle during a traffic stop. Allen again told police and the doctor that he wasn’t concealing drugs. Still, police ordered the emergency room doctor to perform a digital rectal examination and an abdominal X-ray.

But the doctor didn’t find any drugs. Approximately three hours after the initial traffic stop, Allen was charged with reckless driving, spent a night in county jail and was stuck with a bill for the ambulance ride, his attorneys told The Appeal.

Allen’s lawyers say their client never consented to the vehicle, strip, or cavity searches. He sustained “humiliation and indignities, and suffered great mental and emotional pain,” for which he is seeking unspecified monetary damages, according to the lawsuit.

Such intrusive measures in search of drugs are not atypical for some suburban Chicago police departments, said Fox. “If they would have gotten lucky and found some drugs, they would’ve looked like heroes,” he said in a phone interview. “But they didn’t get lucky in this case. It’s just another example of police abuse, police power run amuck.”

A public information officer for Oak Lawn police told The Appeal that the department would not comment on pending litigation. The complaint also names the Burbank officer as a defendant. The city’s police department did not respond to a request for comment.

Two Oak Lawn police officers named in Allen’s lawsuit, Sean Heilig and Michael McNeela, have been named in other civil rights litigation brought against the village. In 2014, Heilig and McNeela were among officers accused of participating in the beating of Omar Abedgader, a Tinley Park man, whom they had arrested and handcuffed for felony possession of a field of live cannabis in a forest preserve. Abedgader suffered injuries that left him with a facial twitch, according to the original complaint. During the same incident, Heilig, McNeela, and other officers allegedly resorted to similar uses of force against Anthony Guzman and Jose Lopez, two men from Burbank whom they had also arrested for the same offense as Abedgader. Guzman alleged in a 2013 complaint that he suffered an injury to his eardrum after officers struck him in the head and body. The defendants denied the allegations of excessive force in both cases, according to court records. The cases were settled. Attorneys who represented the defendants did not respond to requests for comment.

Heilig and McNeela are named as officers in the 2013 and 2014 lawsuits; they are named as detectives in Allen’s complaint and have received a salary bump of at least $14,000 in base pay, according to public records. The Oak Lawn police did not respond to a request for comment about their job titles and salaries.

According to federal court records, an Oak Lawn police officer and officers from at least nine other suburban police departments were named in a 2018 civil rights lawsuit over an allegedly violent home raid in the village of Oak Forest. At approximately 5:30 a.m. on Sept. 8, 2017, plainclothes officers wearing masks and helmets burst through the front door of Javier and Celina Cuellar’s home and threw a flash grenade inside. The officers, who had obtained a warrant days earlier to arrest their son Cristian and search the home for narcotics and guns, then allegedly “ransacked” the home and cuffed three of the Cuellars’ children, including a minor whom officers threw to the ground. The boy sustained injuries to his lip, face, neck and back, according to the complaint.

The officers’ search did not yield any contraband, and Cristian was not there. Days before the raid, Natalia, the Cuellars’ daughter, had told Oak Forest police who had come to the home that he had not lived there for a while.

On Nov. 15, the Cuellars reached a settlement deal with the cities and villages whose officers participated in the raid, the family’s attorney, Torreya Hamilton, said in an emailed statement to The Appeal.

“These towns and their attorneys were wise enough to recognize that you fight some cases, but not others,” Hamilton wrote in the statement. “The Cuellars are a nice, hardworking family who are pleased to put this incident behind them.”

Oak Lawn police declined to provide comment on this complaint. Attorneys for the villages of Crestwood, Dolton, Orland Park, Oak Park, South Holland and Tinley Park, and the cities of Oak Forest and Calumet, which were all named in the lawsuit, did not respond to requests for comment.

The village of Oak Lawn is about 15 miles southwest of Chicago, a city whose police force has faced numerous allegations of brutality, misconduct, and racial discrimination. While police misconduct in suburban communities like Oak Lawn—a city that is 69 percent white—rarely receives the media attention that Chicago police get, racial disparities persist in arrests and charging.

According to an Appeal analysis of data released by Cook County State’s Attorney Kim Foxx, Oak Lawn police sent more than 5,000 felony cases to the prosecutor’s office from 2011 through 2019. Among those cases, 803 or about 15 percent involved people arrested on narcotics charges. The data also revealed racial disparities: Black people were 21 percent of narcotics arrests, even though they are just 6 percent of Oak Lawn residents. By comparison, non-Hispanic white people were arrested for narcotics in proportion to their population, while Latinx people, who are 20 percent of the population, were underrepresented at 9 percent of narcotics arrests.

“There’s a double standard in all communities, where African Americans get treated a lot worse than whites do,” Fox said. “We never hear of a white kid being treated” like Allen, he added.

Allen’s attorneys said their client brought the civil rights complaint in hopes of discouraging future misconduct by police. “They might just stop next time with just an unlawful search of the vehicles, rather than going to the extent they went in this case, which is pretty outrageous,” Fox said.

One thought on “Complaints about Police Abuse: Strip Search and Rectal Exam”