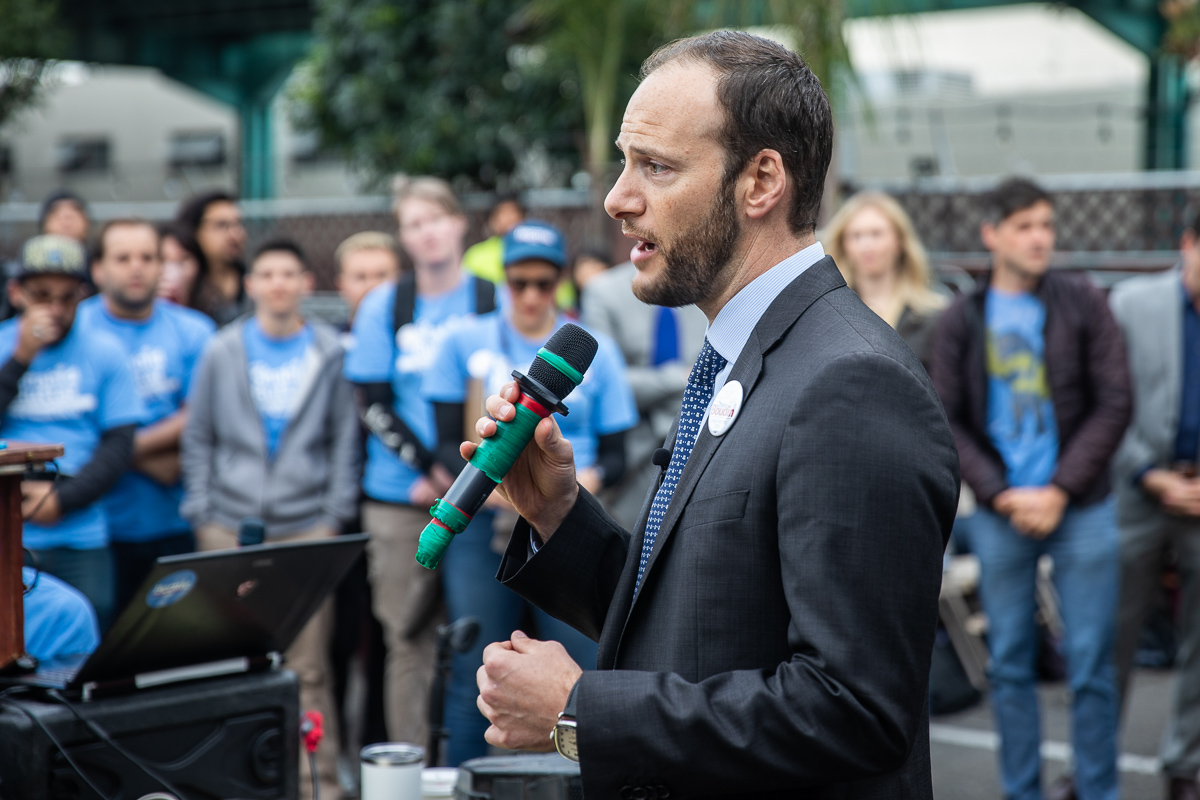 As criticism has rained down on new San Francisco District Attorney Chesa Boudin, his office put out a statement on Monday clarifying that the decision has not been made on whether or not to charge Jamaica Hampton, who remains in a hospital after being shot by police multiple times in December.

Meanwhile, a use-of-force expert told the Vanguard on Monday that they, at the very least, questioned the final shot which occurred while Hampton was on the ground.

Public Defender Danielle Harris told the Vanguard on Saturday that Mr. Hampton was unarmed when police officers shot him in both legs and an arm.

She said that “the coup de grâce shot (was fired) when Jamaica was on his knees, critically wounded and unarmed. The bullets hit major arteries in his left leg and left arm.”

The district attorney’s office clarified once again, “The Hampton case is unique because there are multiple victims who are seeking, and who deserve, justice.”

Hampton’s condition has worsened in the weeks following the incident and the result has been the amputation of his leg, as he remains in the hospital at this time and continues to receive medical

The DA’s office clarified, “No conclusions about the prosecutorial viability of Hampton’s case should be drawn here. The assertion by Mr. Montoya that we have given people a “green light” to attack officers is plainly false.”

They continue: “Our decision should only be understood as an effort to deconflict investigative time limits, statutory discovery obligations and to maintain the integrity of investigative leads. It’s absolutely imperative we have internal clarity on charges we file against any individual.”

As Mr. Boudin said on Saturday, the office repeated, “It would be unfair to ask the officers to testify as witnesses in a criminal prosecution while they are still under investigation for their use of force in the same incident. A better approach is to conclude all investigations and proceed with clarity for all involved, witnesses, victims and suspects.”

They add: “We removed this case from the calendar so that we can do just that. The health of any criminal case depends on internal clarity around the charges being filed, which becomes more complicated when you are dealing with an instance where there is potentially competing criminal liability.”

As the Vanguard reported over the weekend, the DA’s office has “developed a deconfliction policy to clarify our handling of these complex matters.”

The incident was captured on video.

The Vanguard asked Ken Williams, a longtime homicide detective in the Boston area and a use-of-force expert, to analyze the available video.

He noted that the police “observed a suspect matching a certain description walk in front of their cruiser at a crosswalk.”

He continues: “After the suspect walks passed the cruiser surveillance video shows the cruiser driven quickly to the curb. As officers prepare to exit the cruiser to engage the suspect in a Terry stop the suspect ran towards the open passenger door of the cruiser and assaulted the officers.”

At this point, Mr. Williams describes that the officer is seated in the passenger seat and uses his leg, as a less than lethal force tactic, “to kick the suspect in his chest area to defend himself from this extraordinary and rapidly unfolding assault and battery against the officers seated inside the cruiser.”

This forces the officer outside of the cruiser and, once outside, the officer again attempts to arrest the suspect.

They note: “The suspect is observed striking one of the police officers with what appears to be a bottle.”

The officer, he describes, then escalates the force using a baton to control the suspect, “but the officer is knocked to the ground by the suspect and loses control of the baton.”

The suspect then takes off running away from the police on foot and continues to resist arrest and refuses to submit to police commands, Mr. Williams explains.

On the audio, one officer can be heard giving orders of “Get on the ground” to the suspect.

The same officer then uses deadly force “by unholstering his firearm in one hand and at some time held his OC spray, a less than lethal force option, in his opposite hand. The suspect was stopped and placed under arrest when the officer discharged and did strike the suspect with one or more projectiles.”

Ken Williams notes that the SFPD video shows the suspect “remained armed with the bottle while police foot pursuit.”  He determined that this represented “an ongoing imminent threat to police up to the initial discharge of the officer(‘s) use of deadly force.”

However, once they use deadly force, what was no longer clear from the video was “what imminent threat the suspect posed to police after the initial use of deadly force to stop the suspect from striking the officer. The BWC appears to capture a pause and then a single gunshot while he was on the ground.”

He added, “Police and ME reports are needed to fully understand what the officer perceived as an imminent threat to warrant this last and final discharge of his weapon at the suspect…”

In her comments to the Vanguard, Public Defender Danielle Harris notes that Mr. Jamaica was described as “mentally disturbed.”

She argued that the officers who responded lacked “crisis intervention training” and also “failed to request assistance from crisis trained personnel.”

She told the Vanguard, “Had there been CIT personnel involved, these events would certainly have unfolded quite differently and without endangering all in the area that nearly fatal morning.”

Moreover, one of the officers involved in the shooting, Officer Sterling Hayes, is currently under disciplinary review for his prior role in the beating of an incapacitated man with a baton last June.

Despite the pending disciplinary review, Mr. Hayes is an officer who trains young police officers recently graduating from the police academy and, at the time of the shooting in December, Mr. Hayes was training his partner, Officer Christopher Flores, a rookie undergoing his first-year field training at Mission Station.

Share:
Tags:Chesa BoudinJamaica HamptonPolice ShootingSan Francisco Police
Previous : Jurisdiction for Mesa Verde Detention Facility Cases Moved from San Francisco to Van Nuys, Impacting Access to Counsel
Next : Commentary: Why Are We Spending 500 Pages and 2 Hours on a Wireless Ordinance That We Have Almost No Control Over?