(From press release) All across the criminal justice system, concern have been raised about the impact of COVID-19 on the incarcerated population.  The Yuba County Jail has been a subject of some concern about conditions and public defenders have also been concerned about the Mesa Verde Detention Facility.

“All of our incarcerated clients – including our clients in immigration detention centers – continue to be at a heightened risk of being exposed to COVID-19, and my office is fighting every day for

their health and safety.

Immigration detention facilities are particularly at risk with regards to spread of infectious diseases because of congregate-style sleeping arrangements, crowding, the proportion of vulnerable people detained, the lack of proper sanitation supplies, and consistently inadequate medical care resources.

Yuba County Jail and the Mesa Verde Detention Center – the two ICE detention centers where most of our immigrant clients are being held – are not equipped to keep detainees or staff safe during this public health crisis. For over forty years, Yuba has been under court-ordered Consent Decree due to its failure to provide detainees with adequate medical care. The Mesa Verde Detention Facility is a privately run, for-profit facility that houses up to 400 non-citizen detainees in congregate settings who are in civil detention.

For these reasons, I sent a letter today to ICE Field Officer David Jennings, requesting the immediate release of detainees from these two locations.

Congress has explicitly granted ICE the authority to release detainees for “urgent humanitarian reasons or significant public benefit.”  ICE not only has the authority to exercise discretion and release individuals from custody, but also has routinely exercised this discretion to release vulnerable detainees in the past. Detainees can be released to federally-approved alternatives to detention such as telephonic reporting requirements or even electronic monitoring.

In this crisis, every single detainee held at Yuba and Mesa Verde is vulnerable to contracting and spreading the virus, and should be released from custody and provided opportunities for alternatives to detention immediately. We must take these urgent measures now to protect immigrant detainees, detention center staff members, family members, and the broader community from contracting this virus.” 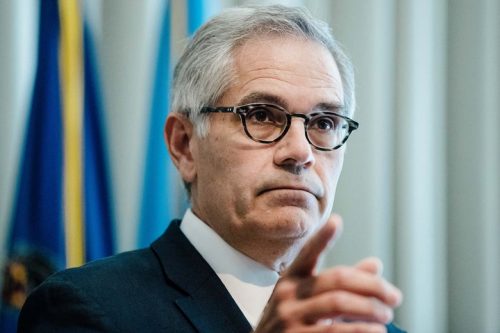 “There are thousands if not tens of thousands of people in prisons across Pennsylvania who frankly should not be there, including people who are elderly, sick, have mental or physical disabilities, and who pose no threat of violence to the public,” District Attorney Krasner said. “Jails and prisons are already dirty, crowded places. The elected and appointed leaders of the Commonwealth must protect us all by moving forward with safe and timely release of people from corrections facilities who are unlikely to endanger the public.”

Since the first reports of COVID-19 infections in the Greater Philadelphia region, the District Attorney’s Office (DAO) has been working with the Defender Association to identify people for early release, including:

District Attorney Krasner also joined criminal justice reform groups including ACLU of Pennsylvania and Amistad Law Project in urging Governor Tom Wolf, the Pennsylvania Department of Corrections, and the Pennsylvania Board of Pardons chaired by Lieutenant Governor John Fetterman to accelerate early or compassionate release for people who meet certain criteria in order to reduce crowding and other conditions that make prisons especially vulnerable environments for transmission of disease.

“I have long expressed disagreement with state and local leaders who support measures to keep their prisons full, especially in parts of Pennsylvania where prisons are viewed as valuable to the local economy,” District Attorney Krasner continued. “I today implore those state and local leaders to be consistent, and to take actions to protect the livelihoods and safety of people who work in prisons, their families, and their communities. A COVID-19 outbreak in prison would be disastrous, and likely deadly, for incarcerated people and everyone else. For the sake of public health, immediate action to reduce prison populations across Pennsylvania is urgently needed.”