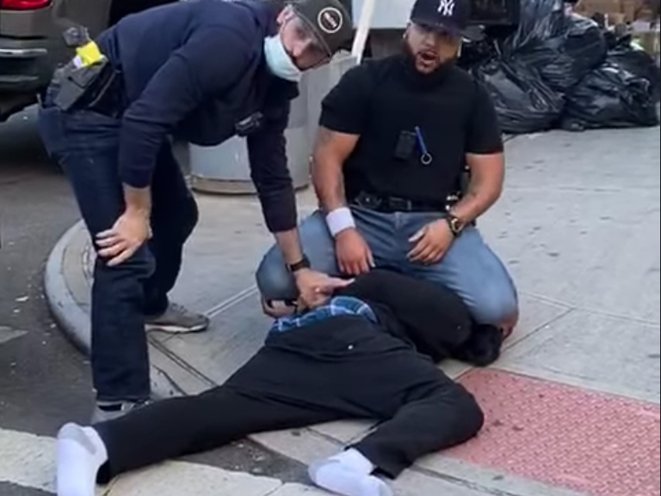 The video has gone viral, all over the news and social media, of a man in New York where the video shows the officer approach an African American man.  He has his Taser drawn, then hits the man and throws him to the ground.

In the video the officer can be heard saying “Move the f—k back right now!” and “What you flexing for?  Don’t flex.”

The issue has highlighted concerns about how social-distancing enforcement “may not be applied equally in all communities.”

Media accounts in New York have shown people congregating in parks across the city in affluent neighborhoods and yet the violent enforcement actions are in communities of color.

One group in a letter asked the NYPD to “release a report on social distancing enforcement statistics by neighborhood and demographic.  The report should include all citations including warning and fines, along with 311 complaint data on the matter so that we and the public can compare application of the law.”

The man, 33-year-old Donni Wright, was arrested and charged with assault of a police officer, menacing and resisting arrest, but the DA’s office has deferred prosecution pending further investigation,

Meanwhile, Wright was hospitalized according to his mother with “severe injuries to his back, ribs and chest.”

“The doctor said he’s in pretty bad shape,” Donna Wright said of her son. “The officer really did physical damage to my son. He is not able to lift or sit.”

The police in response indicated the Manhattan DA will “defer” charges in the incident.  The officer has been stripped of his gun and placed on modified duty.

“You see a number of people not wearing masks at that scene,” NYPD Commissioner Dermot Shea said Monday. “And that is the scene that the officers in plainclothes…initially walked up to investigate.”

Dermot Shea added, “This did start out as a social distancing encounter — it escalated into what you see on this video with a total of three arrests made, recovery of a small amount of I believe marijuana, recovery of a Taser that was not an NYPD Taser in this encounter.”

The deferral of charges was not enough for some.  Janos Marton, who is running for DA, tweeted on Monday: “Not good enough. These charges should be DISMISSED. The charges of assaulting an officer and resisting arrest are clearly bogus from the video. Deferring the charges at this point is just to save face for the arresting officers.”

He earlier suggested that regarding social distancing the “answer should not be NYPD, unless a crime is taking place. In some neighborhoods, they lack community trust, and their presence at a scene represents unnecessary escalation.”

He added, “One answer is civilian city employees encouraging socially distancing and handing out masks.”

Marton added, “Ultimately, we need a cultural shift in thinking about our obligations to each other, not brute enforcement.”

The Washington Post reports today that reporters and police watchdogs have called out “what appeared to be the department’s uneven enforcement over the past weekend, during which they say officers handed out masks in parks largely packed with white residents but aggressively enforced social distancing orders in minority communities.”

Mayor Bill de Blasio called the video of Wright’s arrest “very troubling” and “unacceptable”—at the same time he said this should not be considered an accurate reflection of most social distancing enforcement.

But in a way this is a microcosm of a much larger problem.  In New York, we contrast the treatment of Wright with the white and largely affluent people gathering in the parks, clearly in violation of social distancing orders.

Across the country we see largely white protesters armed to the teeth with weapons, suffering little to no consequence.

This actually started before the COVID-19 crackdown—armed gun rights activists carried semi-automatic firearms into the capitol in Frankfort, Kentucky.  It was a scene reminiscent of the Black Panthers’ move into the Capitol in 1969, except for one major difference.

A reporter from the Louisville paper tweeted, “Weirdest thing about guns in the Kentucky Capitol: if you have one, you’re told to walk around the metal detector. Others must pass through and get wanded.”

Meanwhile, people are banned from entering with umbrellas or sticks that are used for protest signs because they can be “used as weapons.”

In the more recent protests over COVID stay-at-home orders, militia members toting guns showed up in places like Pennsylvania and Michigan.

One Michigan station reported: “Gun-carrying protesters have been a common sight at some demonstrations calling for coronavirus-related restrictions to be lifted. But an armed militia’s involvement in an angry protest in the Michigan statehouse Thursday marked an escalation that drew condemnation and shone a spotlight on the practice of bringing weapons to protest.”

As the station reported: “For some observers, the images of armed men in tactical gear at a state Capitol were an unsettling symbol of rising tensions in a nation grappling with crisis. Others saw evidence of racial bias in the way the protesters were treated by police.”

23 thoughts on “Commentary: Violent Arrest in Manhattan this Week Leads to Questions, As Armed Protesters Get No Resistance”