In a lot of ways this is going to be an unfair indictment of the majority on the school board.  They ended up making a decision on May 21, four days before a revolution started.  It was a financial decision during a time when finances matter.  When Cindy Pickett announced she was leaving, the school board knew with the economy headed south, money was scarce and so they made the decision they have always made—they decided to appoint a replacement rather than pay the money (around $100,000) for a special election.

In retrospect that was a mistake.  The only real question is what that will mean for the district going forward.

What happened on Thursday night, however, happened in full view of the current times.  In 2018, when the appointment was temporary, the school board appointed Joy Klineberg to fill out the seat for Madhavi Sunder.  Woman of color leaves the board, replaced by a white woman.  No one really said anything at the time.  And because it was for a few months and Cindy Pickett was about to get elected, it probably didn’t matter that much.

But with Cindy Pickett making the decision to leave to take a position at DePaul in Chicago, the appointment is going to be more or less a permanent one—two and a half years.

It was a great field of candidates, and ultimately the school board appointed Joy Klineberg again to fill out the term.

But 2020 is not the same year as 2018.  July 2 is not the same as May 21 even.  With several qualified women of color available for appointment, the board again chose a white woman.  The board will now be all white, with just one woman.

Whether you believe that Joy Klineberg was the most qualified—and she was certainly up there—the board being tone-deaf to the optics of 2020 is troubling.  The board was more boxed in than they sensed, and they are very vulnerable at this point because the rest of the board members are white male—Tom Adams, Bob Poppenga, Joe DiNunzio and Alan Fernandes.

She did not stay silent.

First she posted the definition of “cronyism” as “the appointment of friends and associates to positions of authority, without proper regard to their qualifications.” 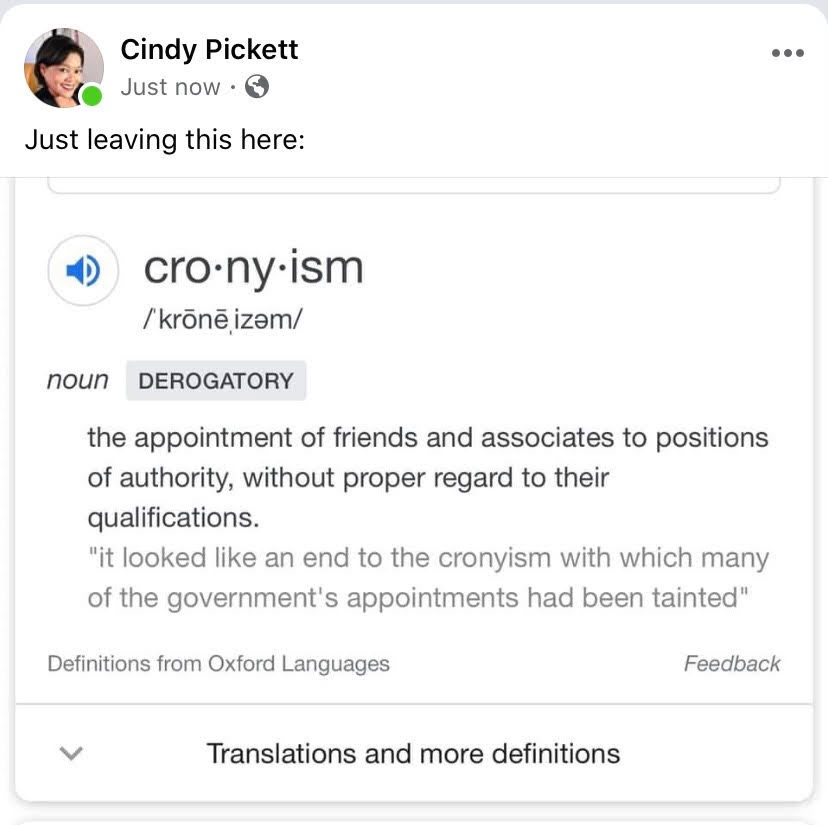 Then she posted a comment that has drawn hundreds of responses: “At the school board meeting when the decision to appoint my replacement on the DJUSD school board was made, I pointed out that the recent history in Davis is that women of color get into office when they are elected… and they have been the top vote getters.  Tonight’s decision by the DJUSD board to not appoint any of the women of color who applied and who were amply qualified is appalling.”

The heat was already on when Barbara Archer, the former school board member and current communications manager for the city of Davis, stepped into the fray.

Barbara Archer wrote: “Keeping a commitment is hard.  The candidate who was appointed has over 10 years of experience working with the district.  It is too bad you are leaving on this note calling your colleagues’ decision appalling and cronyism.”  She added, “They will be the ones who have to make the hard decisions in the next two years.  Have fun in your new life in Chicago!”

That triggered a long back and forth.

I will highlight what I think is a key comment by Anoosh Jorjorian: “Communities of color in Davis have been waiting for fair representation much, much longer than 21 years.”

There is a critical point to be made.  During normal times, the consideration of $100,000 is probably the overriding consideration.  We are in a pretty severe economic downturn and the school district is going to be struggling to find its financial footing.

But these are no longer normal times.  In many ways, we don’t know what this world now looks like.  We may now have to throw out the book.  What was a reasonable decision in 2018—appointment, the appointment of a very well qualified and experienced community member—may no longer work.

The majority of the school board, inadvertently, by deciding to make the decision themselves rather than allowing the community do it for them, has put themselves into a horrible state.

This is the problem now.  This is no longer your parents’ school district.  Davis at one point was a heavily white school district.  That is no longer the case.  The percentage of white students is moving near the 50 percent mark.  According to 2019 data, about 47.5 percent of students are from communities of color and they are served by an all-white board right now.

We have seen dramatic changes in 2018 even.  The top vote-getters in three Davis races were women of color: Gloria Partida, Cindy Pickett and Melissa Moreno.

That is not to disparage anyone in this process.  But this may well be a year of revolution and the school board needed to be more attuned to what is happening in the rest of the world—including Davis where hundreds of people have been marching in recent weeks in highly diverse groups of people, demanding action.

If they were boxed in too much by having to make the decision themselves, they still had time to put it to the voters.

Share:
Tags:Barbara ArcherCindy PickettCOmmunities of ColorDJUSDJoy Klineberg
Previous : Brett Lee Out, Will Arnold and Rochelle Swanson Are Back In
Next : Money or COVID-19 Consequence? Fresno County No Longer Contracting Interpreters for Non-English Speaking Clients

55 thoughts on “Commentary: The School Board Has Made a Huge Mistake”