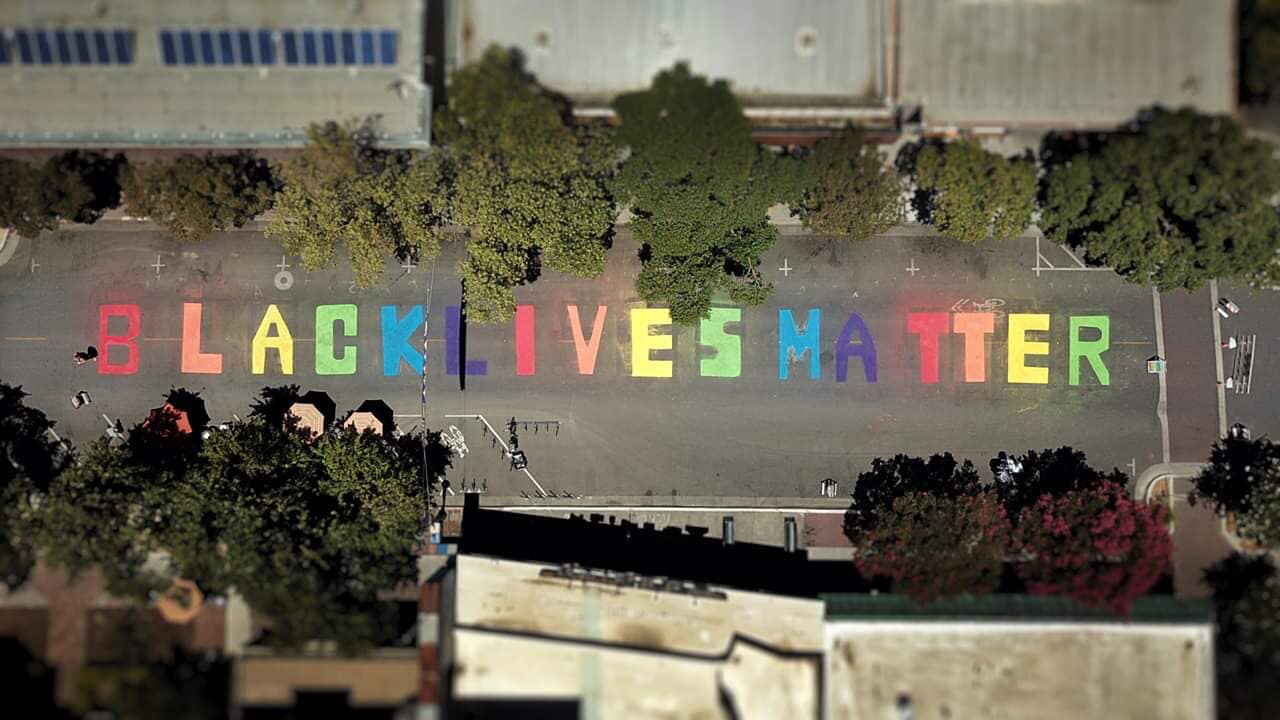 By the Phoenix Coalition Board

The Davis Phoenix Coalition would like to thank all the volunteers who came out and helped spray Black Lives Matter on 2nd Street. Our beautiful rainbow street mural brought visibility, pride and a sense of belonging to the marginalized in our community.

The rainbow colors were a clear representation of the intersectionality of our work for all people affected by injustice and the allies that support us in the work towards a place where everyone is safe, respected and free from violence. After the killing of George Floyd, our community along with the rest of the Nation, voiced outrage over the clear inhumanity blatantly displayed by the police officers in this incident.

This incident coming on the heels of the killing of Ahmaud Arbery at the hands of vigilantes fanned the smoldering flames of the Black Lives Matter movement into an inferno.

The Black Lives Matter movement continues the work of the civil rights movement of the 60s by declaring on their website  “Every day, we recommit

to healing ourselves and each other, and to co-creating alongside comrades, allies, and family a culture where each person feels seen, heard, and supported. We acknowledge, respect, and celebrate differences and commonalities. We work vigorously for freedom and justice for Black people and, by extension, all people.”

The Black Lives Matter organization was founded after the killing of Trayvon Martin and really took off after the killing of Michael Brown.  Its work to call out anti-blackness and the systems that perpetuate it, has become firmly established not only nationally but internationally as well. It has ushered in and brought into the consciousness of the mainstream the idea that we must reevaluate and challenge the idea that institutions even as exalted as policing and education can contain prejudice and injustice.

It is common for conflict to arise when ideas surface that change the landscape of long held truths. Sixty years ago the peace symbol was associated with the counterculture and the demise of American values. People are defensive when confronted with a symbol that threatens to change the balance power.

So it is not surprising that, as much as people can agree with the core principles of Black Lives Matter, it can elicit strong reactions of defensiveness and fear.  This often leads to divisiveness. Our Street Mural in Davis was not immune to these reactions.

The City quickly received requests to place alternate messaging on the street. Because of the way we were given permission, the City would have had to allow other messages to be displayed and this could have quickly gotten out of hand and caused possible traffic problems.

The decision was thus made by the City to have the BLM street mural power washed and examine the policy around civic speech. The good news is that this has prompted the City to consider installing art that honors our black community.

We are pleased that we involved more than just the volunteers that came out that early morning to install it. We ignited the community in conversation, brought a sense of visibility, pride and belonging to our marginalized community members and paved a path for placing art by/for our black community in the forefront.

We truly appreciate all the work everyone did to make this possible. As always, we are deeply humbled and proud of our community and their level of commitment and work towards social justice.

There wasn’t a realization at the time that when you approve one form of art (message) that you may end up having to approve counter messages or ones that few people may want to see or agree with.

They used chalk paint, instead of regular paint, which could be easily removed. Second Street was already closed off by the City because of Open Air Davis so no additional permit was needed to close the street.

Because of this they didn’t need to go through the normal permitting process which is where additional staff are normally involved in the decision making process and typically deliberate the finer details regarding requests like this, especially where art transitions to speech and the issue of our streets being used a public forum are further contemplated.