This is our third of eight questions. The candidates get exactly 250 words.  The answer is due at 9 pm on Thursday.

Do you support or oppose the Davis Innovation and Sustainability Campus, why or why not?

Measure B, the Davis Innovation and Sustainability Campus, is the result of a community-led process that began decades ago. The latest iteration of that process, which led directly to the DISC proposal, began in in 2010 with the Innovation Park Task Force and the associated Studio 30 report.

That community process identified within Davis a lack of space for the expansion of local businesses and “opportunities to attract larger businesses with jobs that fit the City’s University orientation and high skill/education levels.” It also identified the need for a project to have scalability, university partnership, regional collaboration and creative green design; and identified several benefits of such a project, including high paying jobs for Davis residents, allowing young people to stay in the community and bringing additional funding into the City.

This is exactly what the DISC project will provide, and more.

The community-led process also identified the specific site of the DISC proposal as having several benefits, including ample land for space-intensive innovations, good freeway access and visibility,

and surrounding ag properties owned by the City, meaning no chance of sprawl beyond the project site

I plan on voting yes on Measure B, the Davis Innovation & Sustainability Campus. While not perfect, I believe DISC could provide a number of critical economic development opportunities and at completion would significantly expand the stock of affordable housing in Davis. A couple of things are important to note on this issue. The first is that there are a lot of unexplored opportunities of collaboration between the city community and the campus to create a dynamic future-focused economy. I believe it should be a priority of the city to develop those opportunities of economic empowerment, particularly in the wake of this year’s recession. The other thing to keep in mind is that the city government and the community it represents will have to take a look at the various types of businesses and housing proposed as this multidecade project rolls out. This isn’t the only time Davis residents will have input on this. For this project to meet public expectations we’ll have to be engaged for the long haul.

As proposed? Opposed. While a project of this type is critical to the future of Davis, this version is a perfect example of the false choice between ‘this proposal or nothing.’

The University supplies thousands of ‘green’ jobs. Almost all those people live outside Davis.

Several major concerns of Finance and Budget Commissioners were unanswered. The financial consultant agreed that not updating the Development Fee structure was bad policy.

“The full impact won’t occur for 30 years.” Ask L.A. and the Bay Area how that policy has worked out. I got my driver’s license in San Jose in 1981. Bay area traffic was bad, but they were adding lanes. Bay Area traffic is far worse now and they are still adding lanes. Approving impacts before addressing those impacts doesn’t work.

Yes. After a robust public vetting through the city commission process, I voted to place it on the ballot.

A project like DISC has been envisioned in Davis for over a decade. I served on the Innovation Park Task Force (2010-2012), and this was one of the sites identified for a potential location of an Innovation Park.

UC Davis is both the education and economic engine of the entire region, with numerous companies being fostered and grown here, and there are many home grown companies/businesses that want to stay/ continue their growth in Davis, and cannot find space to do so.

The sustainability requirements/features of DISC exceed what is being done anywhere else in the entire Sacramento region, and it is foolish to think that if DISC is stopped in Davis, that something of lesser quality/sustainability won’t be built somewhere else, and then folks will just continue to drive to/from to get to jobs/housing, etc. The City will lose out and the community will lose out as well.

Companies/businesses that are attracted to DISC are primarily looking for suitable space close to the innovation, talent and students of UCDavis, and they’re attracted to the quality of life the city and good schools, provided by the city of Davis and DJUSD, respectively.

Yes, I support more jobs and affordable sustainably designed housing within the DISC project because our community deserves more options for economic and lifestyle resiliency. This project on the Mace curve reflects more than ten years of studies and community outreach. The $117 million in one-time fees and $15 million in construction taxes will help sustain us through the ongoing shortfalls from the global pandemic. This is only part of the equation. The new Davisites and on-site workers will provide economic stimulus to our downtown and neighborhood businesses as new customers, as well as provide additional students for Davis’ under-enrolled schools.

Davis is uniquely positioned to support and enhance research and research related industries, including but not limited to sustainable agriculture, carbon neutral transportation, and equitable food production and distribution. Davis is home to the country’s premiere agricultural research institution. Location matters.

A lack of jobs for a range of educational and vocational backgrounds necessitates workers driving out of town for work and a lack of affordable housing necessitates workers driving into town. We cannot ignore those environmental impacts any more than we should ignore the built-in mitigation measures in the development agreement and the advances in technology that can lessen emissions in industries here in California and around the world. Additionally, the revenues generated from the construction fees alone can help to fund the education and outreach on our current and pending Climate Action and Adaptation Plan, which I have been proud to support from the beginning.

My litmus test when looking at any project as an elected official will include open and transparent communication and conversations with the community. This includes neighborhood groups, city commissions and stakeholder groups. When this project was originally proposed as the MRIC it went through a vigorous review process and was in the pipeline to head to the City Council. As we know,

it was then suddenly pulled and the development of this site was stopped. The developers then re-appeared and presented the Davis Innovation and Sustainability Campus (DISC).

The DISC project did not go back through that same process even though there were differences between the two proposals.

Therefore, it wouldn’t have met my litmus test from the start.

That being said, I recognize the need for projects like DISC and have advocated for similar ones in the past. We need space for companies to grow, foster innovation and help spur economic development and job growth. We need jobs for students when they graduate and we need affordable housing for employees and community members.

There isn’t enough space within city limits to accommodate a project of this magnitude so we find ourselves in another situation that is contentious. The city drastically needs the funds generated by this project and this can be one piece in helping close our deficit.

I am fully supportive of mixed use projects and research shows that mixed use development is the most cohesive type of development a city can and should pursue.

I support DISC but I’m not endorsing it. I treat endorsements as a different level than support. I consider an endorsement to mean I’m enthusiastic about something while support just means I think it’s better than the alternative. I think DISC is a good project that serves several needs in Davis, from providing additional housing to helping attain financial stability for the City to providing jobs for UC Davis graduates and researchers. However, I do think DISC has some significant issues, especially around traffic and emissions, as any project will under capitalism.  If it passes, these issues will need to be mitigated over the course of DISC’s long buildout.  Nonetheless, I still think having DISC is better than not having it given our current political and economic system.

Regardless of one’s thoughts around the merits of DISC, the City and community clearly forced it to be substantially better on a number of issues than the original proposal.  If people hadn’t pressured the developers, DISC would be far less environmentally-friendly with substantially more expensive housing and would also have a higher chance of being rejected by the voters.  This illustrates the importance of participatory democracy along with our ability as a City and a community to push developers to bring better projects instead of us automatically accepting whatever they initially propose.  Similar to how workers can collectively win stronger protections from companies, we as a City and community can use our collective and legal leverage to negotiate for better projects.

I do not support DISC. What is sustainable about 5000 new commuters? Jobs without housing will only exacerbate Davis’ housing crisis and increase emissions. Perhaps a business park seemed like a move forward in 2008, but it is not the future I see. Picture a business park. Do you see boring buildings, endless seas of parking, and no people? Me too.

This project is not all bad. There is a need to create space in Davis for jobs that build on the human capital created at the university, and the inclusion of some housing is a clear improvement on a typical business park. There is also a commitment to fund some much-needed bicycle infrastructure. Currently, the costs outweigh these benefits.

Instead of adding up the costs, here are the changes that would be necessary for DISC to earn my support.

In Exhibit B of the 20-110 – DISC Project General Plan Amendment, we see the land use map we will be approving, and it tells us nothing. After developers have repeatedly taken advantage of Davis by proffering vague promises of grandeur, Measure B hands the same opportunity to the developers of DISC. 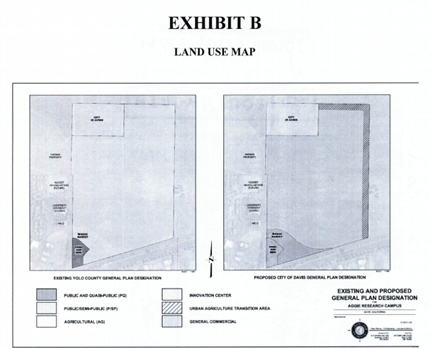