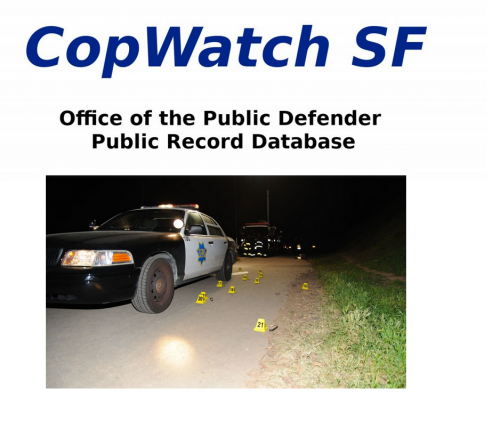 SAN FRANCISCO – Hundreds of public records about wrongdoings by law enforcement officers are now being made available to everyone as of Wednesday through the San Francisco Public Defender’s “CopWatch SF” database that tracks the conduct of SF police and sheriff deputies.

“We consider this our duty because our clients’ freedom often depends on systemic accountability and because the community trusts us to stand up for their rights,” said Mano Raju, Public Defender of San Francisco.

“This database was designed by our Integrity Unit to shine a light on police conduct and encourage greater accountability. Everything included is available publicly, but nowhere else is it consolidated into an easily searchable online resource. We believe this is a model that can and should be replicated across the state,” added Raju.

The CopWatch SF database is now available at sfpublicdefender.org/copwatch

The database includes records that have released under the 2019 law SB 1421, as well as public documents from other sources, including civil

lawsuits, news articles, and complaints filed with the Department of Police Accountability.

The San Francisco Public Defender’s Office said it requested records on more than 2,000 active SFPD officers from agencies including the SFPD, DPA, the District Attorney, and the SF Police Commission in January of 2019 – those received are in the database.

“It’s been almost two years since the new law took effect and we have received less than 10% of what exists. At this rate, it will take twenty years to get records on all current cops,” said Danielle Harris, Managing Attorney of the Integrity Unit.

“We have worked to make what is available easily accessible to all. The database unfortunately does not tell the full picture because many police records are still shielded from public view under confidentiality laws, because police agencies have no incentive to prioritize the records’ release, and because there has not yet been the political will to create that incentive.

“Despite these limitations, CopWatch SF is a living database that will grow and expand for all who care about transparency and accountability in policing, including the community at large, activists, journalists, civil rights attorneys, and public officials,” Harris added.

“I commend the San Francisco Public Defender’s Office for creating this important database and making records on police use of force and serious misconduct available in an easy-to-use format. This tool will make it far easier for the public to obtain records that were made accessible with the passage of SB 1421,” said Skinner.

“Transparency builds trust between the public and police. My office is committed to expanding public access to law enforcement records and to building the trust that public safety in every community relies on,” added Skinner, who tried to expand those categories this year with SB 776. The bill was held over.

“The Public Defender’s Office has radically increased transparency by aggregating public records on officers into one searchable and public database, but this should and could have been done long ago by the City agencies in charge of these records,” said Adriana Camarena, a local community advocate for families whose loved ones have been killed by SFPD officers, has been frustrated by the limited amount of information that families can find.

Camarena added, “We are sitting in the cradle of the information economy with a myriad of solutions available for open government, and the SFPD has failed to provide user-friendly, easily relatable, open data sets that allow the public and media to find the real story behind the data and to support public policy change.”