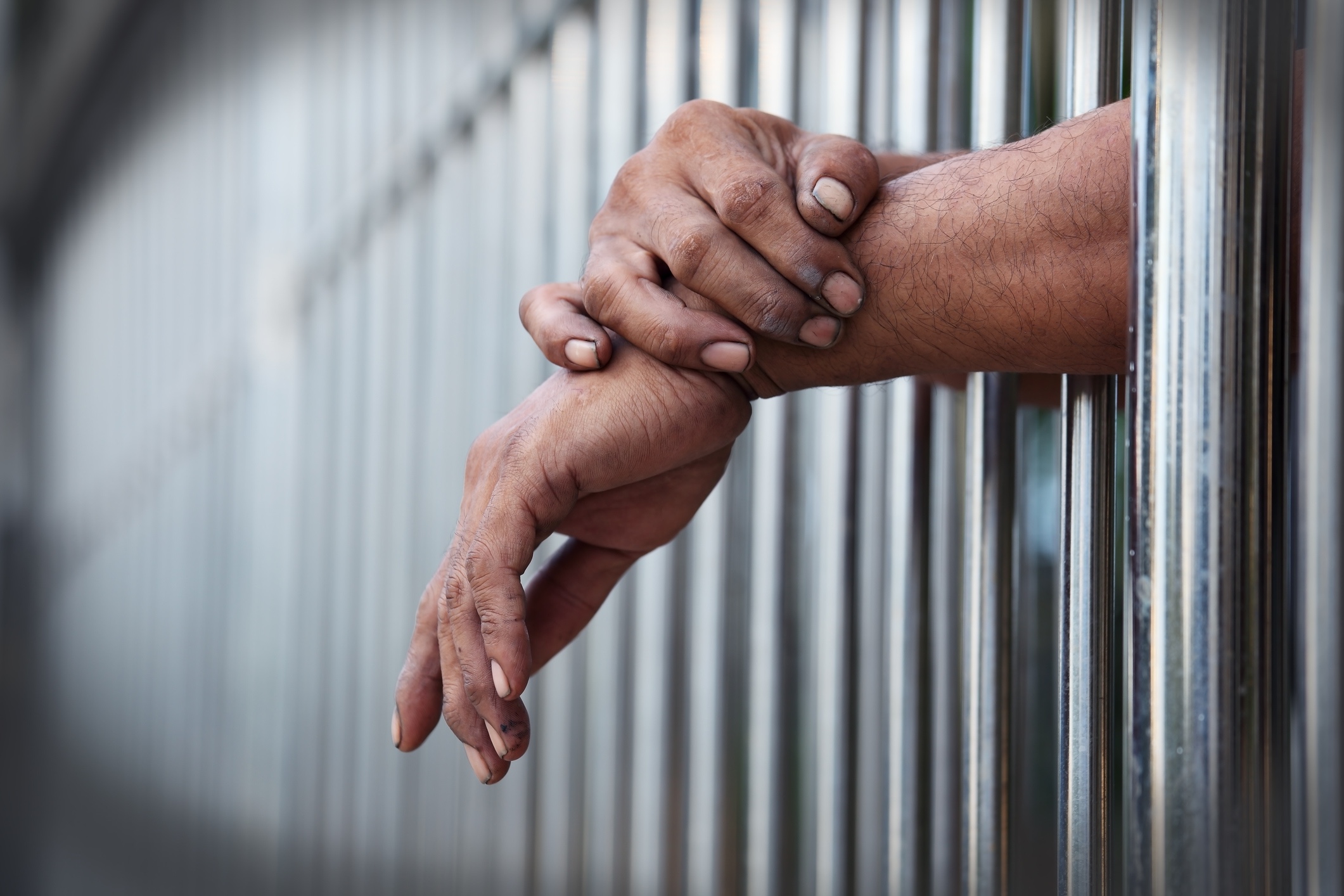 This report is written by the Covid In-Custody Project — an independent journalism project that partners with the Davis Vanguard to bring reporting on the pandemic in California’s county jails and Department of Corrections and Rehabilitation (CDCR) to the public eye. Visit our website to view and download raw data on cases, testing, releases and vaccinations.

The COVID-19 pandemic has ravaged the United States since early March. While Americans scrambled to stock up on toilet paper and hand sanitizers, incarcerated people confined to their cells, tucked away from the rest of society wondered, “What happens to us?”

California’s jails and prisons harbor the perfect conditions for deadly coronavirus outbreaks. There is little sanitation and social distancing is nearly impossible in such close quarters.

Due to limited transfers, jail populations across the state have spiked. The Prison Law Office estimates that over 8,000 individuals meant to be in CDCR custody are being held in jails.

For example, as of Nov. 21, 155 individuals in Santa Rita Jail, Alameda County— 8% of the total jail population—are slated for state facilities. SRJ’s rising population has contributed to its four massive outbreaks since March.

Typically, CDCR Reception Centers process Positive Programming Credits (PPC), good-behavior or time-served credits, as a part of the intake process, to determine a release date or parole eligibility. Due to halts in transfers, CDCR has requested support from County Jails to aid the credit calculation and release processes.

Several of these 8,000 individuals may be eligible for release or parole based on the total credits earned. However, they have not received release or transfer dates due to backlogs and broken bureaucracies, leaving them in a painful state of uncertainty. Many are also serving longer sentences than originally intended.

While those pending transfer to CDCR are experiencing delays in their transfers or release, individuals currently in CDCR custody who are eligible for release under various early-release programs are facing delays of their own.

We requested Aaron Francis, CDCR Information Officer, for data on the total releases made thus far and the remaining cases eligible for future releases. He affirmed that “CDCR cannot determine the exact number of people who will be eligible for release.”

Francis added, “…All eligible offenders have been released according to the expedited release criteria… Additionally, we have reduced our incarcerated population by almost 22,000 inmates, which has brought the state prison population to its lowest point in more than three decades.”

CDCR has released an estimation for the number of people eligible for expedited release as of July 30. However, no such estimations are available for August through November.

Even though CDCR claims to be on track with transfers and releases, many incarcerated people and their loved ones suggest otherwise.

John and “Starlight” are domestic partners who shared their experiences with jail-to-prison transfers and release with us. Their names have been changed to protect them from potential retaliatory actions from jail staff. Since June, John has been incarcerated at Rio Cosumnes Correctional Center (RCCC) under the Sacramento County jail system.

On July 9, CDCR announced a Positive Programming Credit award of 12-weeks to offset the credits not earned due to program suspensions resulting from the pandemic. In all likelihood, John is eligible for the award since he meets the stipulations. Had he received his PPC award in time, he would have accumulated a total 11 months worth of credit, implying that he could have started parole on Oct. 23.

To calculate and assign PPC credit, CDCR has requested jail staff to send relevant documents to them, including court judgements, plea agreements, charging documents and probation reports. If eligible, they will assign a CDCR identification number to the individual, and calculate their release date. The release date is to be sent to the county jail and provided to the individual.

Yet Starlight and John neither received confirmation from RCCC regarding his eligibility for PPC, nor an identification number or release date.

Starlight has been advocating for John since July to obtain a transfer or release date. She spoke with Commander Charles Meeks who said, “We’re on your side.” Meeks contended that the Sheriff’s Office has been consistently sending documents to CDCR to calculate credits and release eligible people.

In October, Starlight told us that “transfers are stalled because of mismanagement by CDCR and the jail.”

She recalled her experience dealing with the bureaucracy of CDCR and RCCC to identify a release date for John like a “maze going back and forth, everyone gives you different answers, it’s like they make up their own rules.”

Starlight also filed a 602 grievance form on John’s behalf. He was pulled out of his pod and told someone would speak to him about the issue, but no one showed up.

Additionally, Starlight’s research was the only source of information available to John’s pod-mates about transfers, credits and releases. She reiterated that there is a general lack of knowledge about CDCR’s actions and decision-making across all levels of the jail system—from the Sheriff’s Office or Commander to the jail population.

Jail officials estimated that as of mid-October, nearly 200 people at RCCC are awaiting transfer to CDCR, but their credits are not being processed due to backlogs in CDCR’s system, which is stifling the progress of cases.

Starlight lamented that she wanted nothing more than to “know when he can come home, not anything else.”

She said, “Our goal has always been to transfer out all sentenced inmates as soon as possible, but due to the pandemic, prisons have not been accepting any transfers. Within the last week they have started to allow a small number of transfers which has allowed us to send a limited number of our sentenced inmates.”

Contrary to John’s experiences, Bongiorno asserted that “inmates do in fact have a scheduled release date,” and if they don’t know what it is, “they can obtain this date from their floor officer via an inmate Kite request.”

After several grueling months of anxiety and uncertainty, on Nov. 16, Starlight and John were finally given some clarity on his transfer. In their last correspondence with us, John was expecting to be transferred to a CDCR Intake Center by Nov. 30, where his credits would be calculated.

John’s experiences mirror hearings from the Sacramento County Superior Court in which release dates for defendants are extremely unclear.

In one such case recorded in late October, defendant Eddie Jackson asked the court if he has a release date. The judge assured him that since he is serving a state prison low-term sentence, the prison will provide him information on his release.

His public defender, Michael Mullan, told him that as of Sept. 24 he has 104 days left to serve, 74 at the time of the hearing. Defendant Jackson agitatedly inquired “Last time I was here, you told me I had 2 to 4 months left!”

When Mullan confirmed that was true, Jackson posed this question to the court: “The prison is not accepting people, and no one’s getting transferred, where will I spend my time?”

Although he could not answer, Mullan offered this: “If you’re not released by mid-December, call me.”

CDCR’s backlog of transfers is evident in other cases during late October. Defense attorney Larry Pilgrim asked the judge to put off sentencing for his client, defendant Juan Mendoza, until Jan. 29 because “CDCR is still not picking up transfers from the branch.” The judge agreed and said “the world is changing by the minute, and who knows, maybe we’ll have some transport in January.”

Public defender Robert Woodard faced the same situation with his client, defendant Richard Kane. He is a state prisoner who was not being transported to CDCR. While Deputy District Attorney Rainey Jacobson requested sentencing, the judge again opposed and decided to hold off sentencing until January because CDCR is not accepting transfers.

In contrast to Sacramento County, CDCR calculated credits and granted releases for some in Santa Rita Jail, Alameda County, without transferring them to an Intake Center. Captain Dan Brodie estimated that 3 or 4 people were released this year as a result of their credits.

According to Brodie, County Jails play no role in calculating and processing credits. He said “CDCR calculates credits and tells the jails what to do.” Because of this, they are unable to support releases even if someone is eligible.

Regarding this game of deflecting responsibility for transfers between CDCR and County Jails, Stephen, who was recently released from the Male Community Reentry Program (MCRP) in San Diego, remarked that “CDCR didn’t freeze inmate movement until September, but that’s affecting the jails, so now they’re now busting out at the seams. I think they don’t have the facilities to isolate people and manage them.”

Stephen worked at a fire camp in Valley View and intermittently served time at the High Desert State Prison and Lassen County Adult Detention Facility in Susanville. He said that when COVID-19 hit, “all of these good time credit initiatives to help inmates get out early came to a seizing halt.” He remarked that he could not get his college credit because the pandemic shut everything down, including education, substance abuse, and anger management programs.

Although he was eligible for the MCRP, an alternative custody program that would have allowed him to be released in March and go home to Southern California, it was canceled due to the pandemic.

He got the call that he was eligible for MCRP in September, a staggering 6 months after the initial cancellation. He was transferred to the program soon after the notice, and was eventually released.

Stephen echoed CDCR’s claim that everyone inside jails and prisons received 3 months of good-time credit to help with the cancellation of PPC programs. However, he commented that “the 180 day and 365 day [early] releases were never materialized.”

Stephen also filed a 602 grievance form to push for his MCRP transfer request to be approved. The associate warden responded that there was no movement due to the pandemic. Even though his Commander was willing to drive him home to Southern California, he “was just stonewalled.”

The halts in jail-to-prison transfers and slow releases from CDCR custody are over-burdening an already broken carceral system. As populations build up in jails, the risk of contracting COVID-19 is becoming more severe.

When Starlight questioned Commander Meeks on the jail’s actions to mitigate COVID-19 in light of a rising population, he stated that social distancing is impossible since incarcerated people “racially separate themselves.” He added that there is no hand-sanitizer since it is a fire hazard; only soap and water are provided per CDC recommendations.

Despite growing needs that come with a climbing jail population, Sacramento County Board of Supervisors diverted COVID-19 funding from the CARES Act to the Sheriff’s Office to fill budget deficits and payrolls. It could have been used for additional PPE, masks, cleaning supplies, and medical care for the jail.

Facilities have also stifled and silenced those who are critical of their actions. When Stephen’s commander spoke out about the lack of COVID-19 precautions being taken at his fire camp, he got “lambasted.” The warden sent out a memorandum that threatened people’s jobs if they spoke out. It said they are under contract to not speak to the media and only the Public Information Officer is allowed to do so.

Rising jail populations have led to multiple outbreaks in County Jails, as CDCR backlogs have delayed releases and transfers. There continues to be a dire lack of coronavirus preparedness and precautions across prisons and jails. The reality suggests that California’s carceral system is far from fixing its COVID-19 response and the consequences will be apparent in the months to come.