At Tuesday evening’s City council meeting, Dr. Kenneth Burtis and Dr. Brad Pollock shared an update on Healthy Davis Together (HDT) and heavily emphasized the importance of expanding testing throughout the city of Davis.

Dr. Burtis noted that the numbers of positive cases are “gradually or slightly drifting upwards.” The spikes in the graph are due to family gatherings during the holidays.

On Monday January 11, there was 2.9 percent positivity rate, meaning 1/34 people in Davis who are being tested have tested positive for COVID-19.

Dr. Burtis further stated that the UC Davis Genome center, where the coronavirus tests are sent, has a “good testing capacity that is not being used.” The genome center can take 4,000 tests a day collectively from the Mondavi Center testing site and the Senior Center testing site; however, the number of tests per day is barely reaching 1,500.

“That’s not good enough… we need to ramp up efforts [to expand and promote testing in the city],” Dr. Burtis said.

Council member Will Arnold heavily emphasized the ease of testing and “implored” the community to get tested. He stated that the lifted stay-at-home order simply means that “there’s probably a bed for you at the hospital” and not that the community should relax because things are going back to normal.

Newly-elected City Council member Josh Chapman asked about how HDT’s outreach efforts will promote testing “to communities that may not have access to see Mayor Partida’s video because they cannot afford cable… or folks that work in industries who are stocking shelves and working late at night who don’t have access to the hours when testing is open.”

Diane Parro stated that HDT is working on connecting to faith-based groups and community organizations to promote awareness around COVID-19 and the testing in place in Davis. In addition, HDT will be opening two new testing centers: one in North Davis and one in South Davis.

Kelly Ratliff, the Vice Chancellor of UC Davis, stated that mobile testing units have provided asymptomatic testing in Sacramento and have visited “different neighborhoods.” In addition, there are “hirings underway to expand several more mobile units so that we can go to more outlying areas and bring testing to folks just as we’ve made it as convenient as possible for folks to come in.”

Next, Dr. Brad Pollock spoke on the new variant of COVID-19 that is currently in San Diego. So far, this new variant that is more easily spread, has not been found in Davis. However Dr. Pollock estimated about two months before it will reach the Davis and Sacramento region.

Dr. Pollock stated that the vaccines are effective against the new strain and added that for the asymptomatic people who test positive for COVID-19, the genome lab is testing those samples for the new variant as well.

Furthermore, as of Wednesday morning, the state has expanded the distribution of vaccines to elderly citizens aged 65 and older, meaning they can immediately access vaccines. 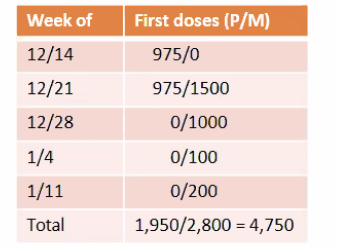 County Administrator Patrick Blacklock stated at the city of Davis and Yolo County joint committee that the county is working on distributing vaccines; however, they need more. The county has received significantly less vaccines than a couple of weeks ago, so they requested additional vaccines.

Share:
Previous : Man Writes Vanguard about His Fight for Relief under SB 1437, for Murder He Did Not Commit
Next : DUI Defendant Sent Straight Back to Jail after Violating Court Orders