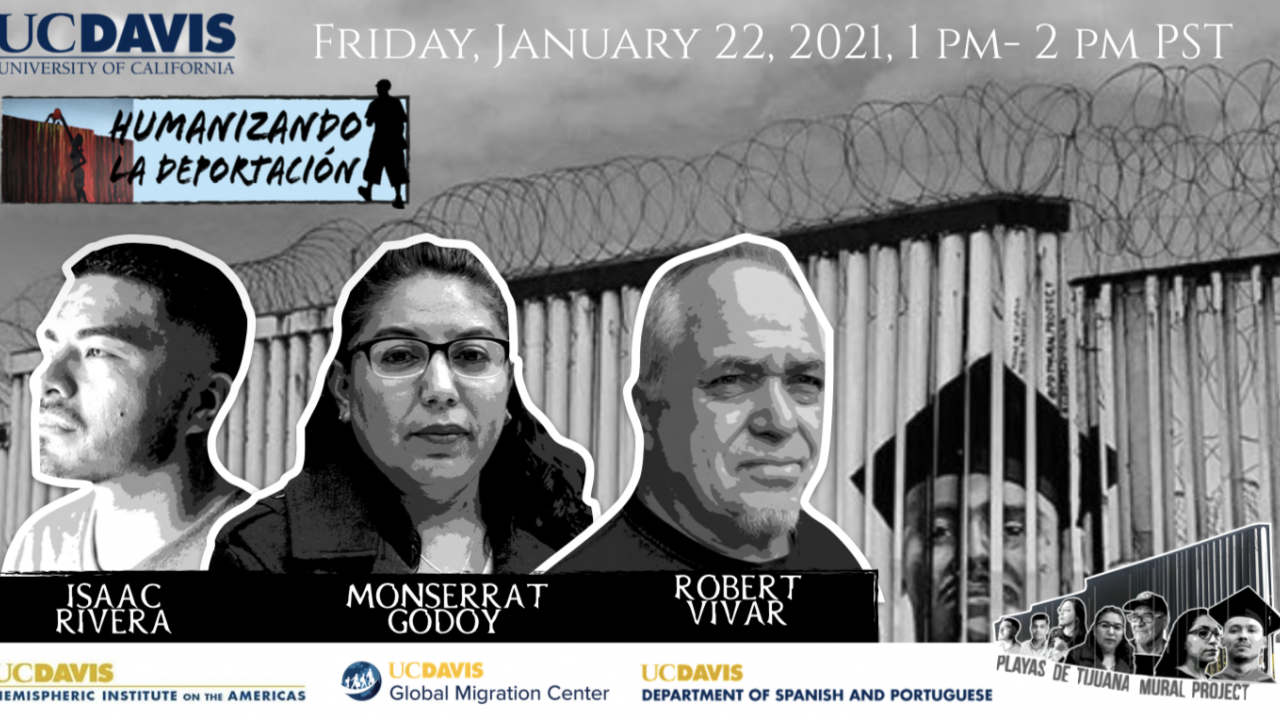 Robert McKee Irwin, the coordinator of the Humanizing Deportation Project, hosted the event.

It was also organized and co-moderated by Lizbeth De La Cruz Santana, director of the Playas de Tijuana Mural Project.

The final moderator was Sarah Ashford Hart, a grad student at UC Davis.

This event was sponsored by the UC Davis Department of Spanish and Portuguese, the UC Davis Hemispheric Institute of the Americas and the UC Davis Global Migration Center.

Irwin began the event by playing a short video on narratives on deportation and then passing the stage to De La Cruz Santana, who provided a brief history and goals of The Humanizing Deportation project.

De La Cruz Santana then introduced speakers Godoy, Rivera and Vivar, who spoke freely on their experiences in deportation and separation.

As this was a bilingual conversation, some of the details of the speakers’ stories were lost in translation, but one thing was apparent in each storyteller’s struggle – frustration.

Godoy’s story was one of victimized abuse, misinformation and separation.

Coming to the U.S. from Mexico to accompany her husband, she found herself depressed and isolated.

During one abusive episode between her and her husband, her daughters had called the police in fright.

Without knowing about the U Visa, Godoy and her daughters had soon found themselves deported back to Mexico.

The U nonimmigrant status (U Visa) is set aside for victims of certain crimes who have suffered mental or physical abuse and are helpful to law enforcement or government officials in the investigation or prosecution of criminal activity.

Back in Mexico, Godoy’s daughters, victims of harassment from their peers in school, were able to return to the US from Mexico, but without their mother.

Currently separated from her daughters, Godoy has tried many times to cross the border to be with them, to no avail – each time resulting in being deported back to Mexico.

Reaching over a decade since she has been able to be with her daughters, she hopes to leave with this sentiment to her daughters: “I want you to know that I keep on struggling to return. Even though time does not stand still, it goes by so fast, and I still can’t be with you.”

Rivera started his story of growing up in San Diego, California, and not really knowing he was an undocumented immigrant.

He said the notion only hit him when he was trying to apply for a driver’s license and could not provide a social security number.

He recalled another story, saying that he was heavily involved in his church, and while on the way to a pastor’s conference in Temecula, he was stopped by border patrol.

Rivera recounted the inhumane, vicious treatment of patrol officers during his process of being deported to Mexico.

When asked if he wanted to come back to America during the Q&A session of the event, Rivera said, “Of course! Going through a breakup and adapting to a new life (in Mexico) wasn’t too hard – it was not seeing family.”

Rivera has not seen his parents in nine years, who are now currently hospitalized with COVID-19.

He hopes to see them on a business Visa this year.

Rivera left with this sentiment: “Why don’t we put some kind of framework on both sides of the country? If these people from Mexico want to immigrate to the United States, let’s make it easier for them. (Let them know) there is a pathway, and these people don’t have to cross (dangerous ones) … I know that a lot of work has been done already, but I think that there’s a lot more work to do on both sides of the border.”

Born in Tijuana, Mexico and raised in Riverside, California, Vivar went to school in the United States, worked in an airline company and is now a family man.

After leaving the airline company, Vivar was seeking help for addiction and pleaded guilty to a crime he did not commit.

In 2003, he found himself deported back to Mexico. After three months, he returned to America to work to support his family.

Unfortunately, Vivar was again deported in 2013.

He has been missing his family and struggling with mental health, but has been finding inspiration through activism.

Vivar provided updates on progress made by the Humanizing Deportation Project, saying, “Something that we hope to do in the future – perhaps we need to wait till the end of the pandemic – but we have new collaborations with the UC Davis law school to offer legal consulting to deported Mexicans who have worked with us in Tijuana… maybe as soon as the spring.”

Vivar closed on a cheerful note, “This new administration has already introduced a blanket immigration bill with 100 different components…. Family reunification as a component of that immigration bill is there …I think that if people really care about the immigrants that we’re hearing from today, they’ll get involved in activism. In short, unification remains a priority in whatever immigration legislation gets passed in the coming years.”

To learn more about the Humanizing Deportation Project, the community storytellers, other related projects and a recording of this event, visit https://globalmigration.ucdavis.edu/events/stories-border-conversation-community-storytellers-deportation-childhood-arrivals-and-family.

Share:
Tags:DeportationImmigrationUC Davis
Previous : In Aftermath of Capitol Riots, Infighting and Criminal Charges Mire the Alt-Right
Next : Judge Grants Domestic Violence Restraining Order to One, but Rejects Another with Unreliable Victim Testimony