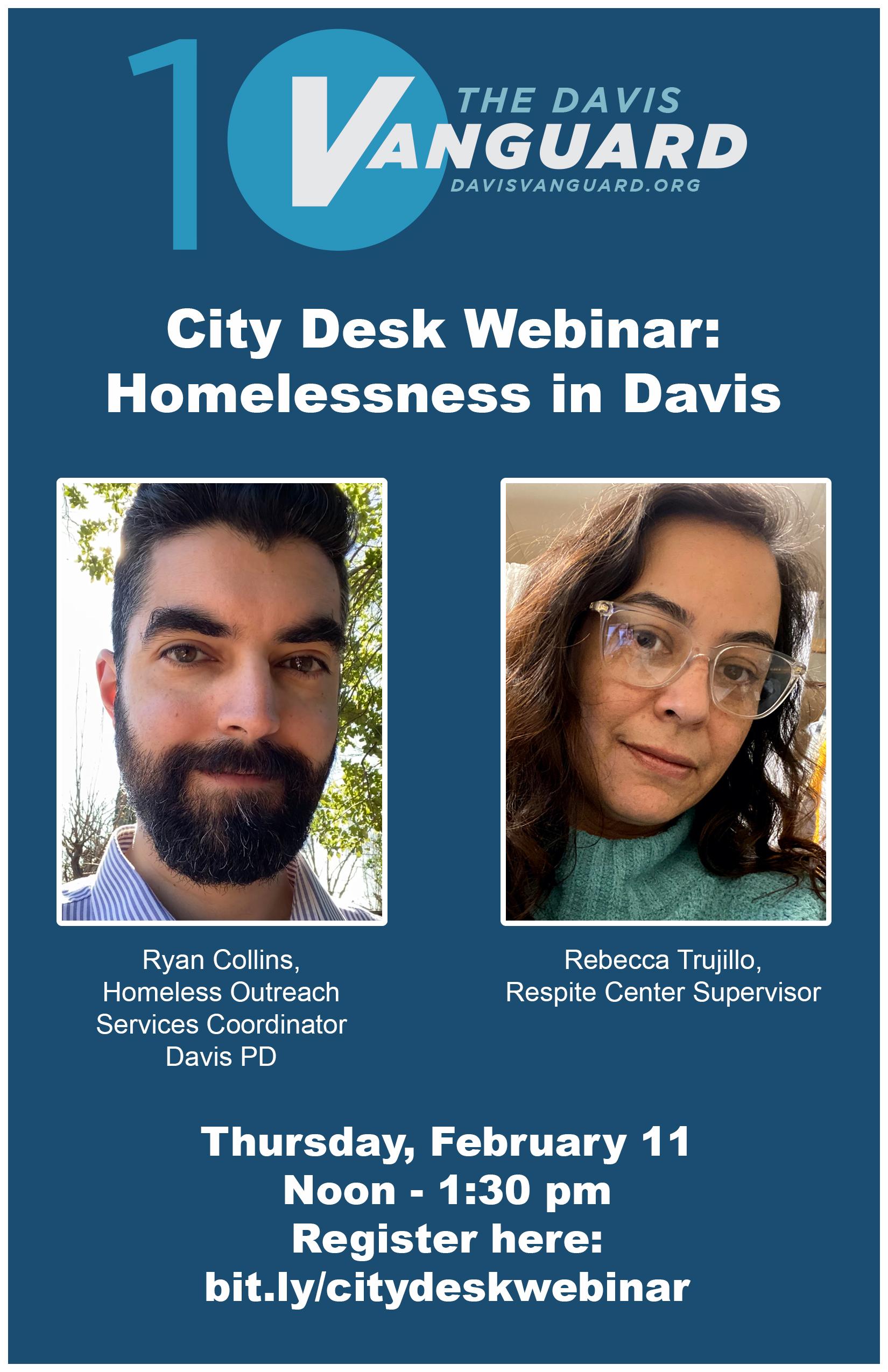 DAVIS — This month’s installation of the Vanguard’s Monthly Webinar, titled Homelessness in Davis, discussed a variety of topics related to homelessness in Davis. The webinar was hosted by Jordan Varney, a UC Davis alumni, and Lauren Smith, a recent graduate from UC Davis. Varney and Smith are co-editors of the city newsdesk for the UC Davis club.

Co-host Smith emphasized the issue of homelessness by stating that as of January 2020, 151, 278 people were unhoused in California. In 2019, the City of Davis had a total of 190 unhoused people. In 2019, Yolo County had 86 youths who were unhoused.

A question for panelists asked what sort of programs and services currently exist in Davis to support the unhoused population.

Ryan Collins answered by mentioning that there are programs and services offered in Davis by units of local government, non-profit organizations, student groups and church groups. The priority for these groups is to attend to the basic needs of the person (e.g. food, shelter). Collins also mentioned that, currently, there is no dedicated year-round emergency shelter in Davis.

Collins continued by discussing Project Roomkey. In response to COVID-19, an emergency shelter that is accessible to a larger number of people, was made available through the state-wide initiative. Using local hotels, there are currently 70 eligible people sheltered through the program.

An organization formerly known as RIWS previously provided congregate shelter during the winter. Due to COVID-19, a new program has been adapted called DESP (Davis Emergency Shelter Program). This program provides non-congregate shelter to the medically vulnerable population. A person in this program might start in a hotel room through Project Roomkey and then transition to an apartment for longer term housing.

Additionally, Davis Community Meals and Housing has a transitional housing program for single adults. CalWORKS also provides families an individual hotel room while they work to get them permanent housing through their program.

Panelist Rebecca Trujillo spoke about a new program that is run by vets at UC Davis, PAW. This program provides free care for the pets of the homeless population. They offer their services the first Saturday of every month.

Not to mention, one of the many day services provided by the Respite Center is a storage area that offers a safe place to store belongings while going to a place that otherwise wouldn’t warrant taking all personal belongings.

A second question posed by co-hosts asked about the long-term plan for the program, since Respite is currently a pilot program.

While Respite is a daytime facility, it comes into question what options the unhoused population has at night.

Trujillo stated that Respite has been able to provide tents, sleeping bags, blankets and warm clothing, alongside other resources for the cold weather. These are the only things that can be offered by the daytime facility at this time.

While the center is currently a pilot program, there are certainly improvements that can be made or services that can be added.

Trujillo hopes for Sundays to be added to the days of operation. Notably, she also hopes for the program to continue, while also incrementing the number of clinicians available to offer help in the sector of mental health.

A public comment questioned whether there are currently any gaps in resources for the unhoused population.

To help mitigate the spread of COVID-19 among the homeless population, according to Trujillo,

Respite screens people by asking if they have symptoms while also taking temperatures, giving masks and shields. Everyone in the center has to wear both. Measures have also been taken to sanitize and social distance.

Collins also interjected that Project Roomkey has experienced a recent push for vaccinations to those who are interested. Many have already taken the offer and are now vaccinated. As of now, there is no real estimate as to the number of unhoused people who have been vaccinated.

Collins added that the unhoused population has access to on-site medical care for early detection of symptoms and appropriate placement.

Later in the webinar, the panel moved toward the topic of sanctioned camping and the impact of it to the unhoused population.

Collins emphasized the need for sanctioned camping due to the limited amount of emergency housing.

In regards to the topic he stated, “This is something better, it’s not really what’s ultimately needed, which is safe housing for everybody, but it is a start towards a place that is purpose filled to meet those basic needs.”

If community community members wish to be involved to help support the unhoused community or other services that are offered in Davis, Panelists Selina says people can contribute by donating. HOPE accepts donations that funds programs like street outreach that provide refreshments and warm clothing.

Collins states that support can be achieved through time, donations and advocacy.

As for concerns regarding the homeless community and crime, and the possibility of attracting more homeless residents, Collins states that without the resources currently available there would be no way for people to get better or improve their behaviors.