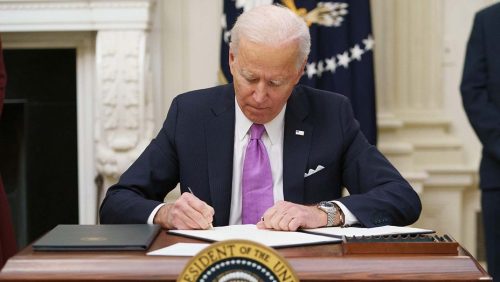 Citing a need to “reduce profit-based incentives to incarcerate,” the order will prevent the Department of Justice from pursuing new contracts with private prisons in the future, but will not put an immediate halt to those contracts already in use. The order has no jurisdiction over the use of private prisons by states, which do not operate under the Department of Justice, as it is a federal agency.

Biden’s order is just one example of the stark differences in criminal justice policy between the current administration and that of former president Donald J. Trump. While in office, Trump supported increased police rights and protections, greater penalties for specific crimes, and an “end [to] cashless bail.”

Following the murder of George Floyd in May 2020 and subsequent calls to restructure policing and prisons in the country, Biden faced a tremendous amount of pressure on the campaign trail to address levels of mass incarceration.

His policy agenda surrounding mass incarceration and immigrant detention continue to undergo scrutiny, given his role in legislating the 1994 Crime Bill. This bill disproportionately impacted communities of color through implementation of policies such as the “three strikes and you’re out” rule and expansion of the death penalty.

Nearly three decades later, Biden has reversed course on many policing/incarceration policies that he originally championed as a U.S. senator. His 2020 criminal justice platform articulates, “To build safe and healthy communities, we need to rethink who we’re sending to jail, how we treat those in jail, and how we help them get the health care, education, jobs, and housing they need to successfully rejoin society after they serve their time.”

While he has been careful to stray away from movements to defund the police and abolish all prisons, his 2020 electoral platform included (in addition to ending federal private prisons) the elimination of mandatory minimums, decriminalization of cannabis, and an end to cash bail.

Still, prison reform champions and common constituents alike are disappointed by the scope of Biden’s executive order. Concerns have been primarily twofold.

First, the order fails to follow through on a campaign position that “the federal government should not use private facilities for any detention, including detention of undocumented immigrants.” One study notes that approximately 75% of immigration detention centers are associated with private facilities through the Department of Homeland Security.

Another report documents that, as of Jan. 2020, approximately 81% of people detained in Immigration and Customs Enforcement (ICE) custody were detained in facilities that are privately owned or managed.

Silky Shah, executive director of Detention Watch Network, explains, “Whether called ‘jail,’ ‘prison,’ or ‘detention center,’ these systems share the same unjust design: to incarcerate people of color, profit off of them, and strip them of their dignity. The Biden administration must now address the private prison industry’s toxic relationship with the Department of Homeland Security.”

This is a small dent in comparison to the total incarcerated population of over two million individuals in the United States, but Biden administration officials and supporters remain adamant that the order is an important step in addressing consistent underperformance in private prisons “with respect to correctional services, programs, and resources.”

Holly Harris—executive director of the bipartisan criminal justice organization Justice Action Network—argues, “Everyone is missing that are a big obstacle to reform because they give millions to elected officials who write our criminal law.”

Another source of criticism stems from the fact that even federal facilities still employ a multitude of practices that drive profit from mass incarceration. For example, private companies and vendors amass billions of dollars from “selling goods in prison commissaries” and collecting “exorbitant fees for calls from prisoners to loved ones and lawyers.” The executive order does not address such practices.

Biden’s order is particularly under the spotlight given the unprecedented impact of COVID-19 on incarceration facilities across the nation. Individuals such as Jesse Ubaldo Rodriguez, who last year was granted permission to serve the remainder of his sentence from his home given the intense spread of the coronavirus in the federal prison system, hoped that Biden’s executive order would rescind a Trump-era memo that would return individuals such as Rodriguez back to incarceration. No such provision was included.

Regardless of debate over the order’s reach and limitations, the market did experience a sharp but expected decline in prison stocks with the passing of the order.

The loss of value was particularly prominent in GEO Group shares. GEO Group is a for-profit organization that operates a significant fraction of U.S. correctional facilities. Under the Trump administration, the group doubled its revenue, with the federal government increasing GEO Group spending from $260 million to $600 million over a five-year period. Over the past year, however, GEO lost “between 50% and 60% of their value.”

While it remains to be seen if Biden will stay true to his promises to dramatically shift criminal justice policies across the nation, the poor reception of his executive order is indicative of the scrutiny he will face as president should he fail to follow through on campaign positions.

Kritika Singh is a writer for The Vanguard at Berkeley’s prison reform desk. She is a freshman at UC Berkeley, studying Political Science. She is from Tracy, CA.