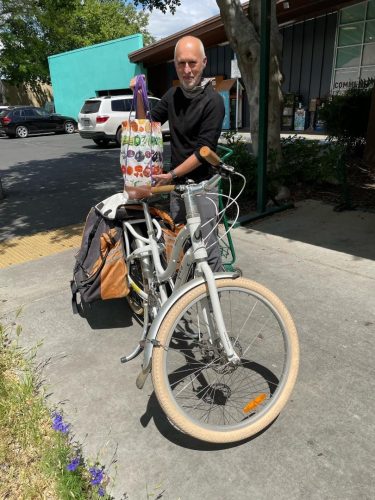 Sometimes it’s the very people that don’t intend to be an inspiration that inspire us the most. Such is the case with Robb Davis, who served as the Mayor of Davis from 2016-2018 (yes, his last name matches the town he served as a public official). He made the decision to go car-free in 2003 and it fundamentally changed his family’s life. It also served as inspiration to others to convert to more cycling and less driving. Maria Contreras Tebbutt, Director of The Bike Campaign, credits Robb as the reason she and her family decided to pare down their car use. “He’s been a ‘roll’ model to me and responsible for our conversion to one less car. He takes personal carbon footprint very seriously.”

Robb’s initial decision to become car-free was prompted by a host of reasons: live a more simplified life, reduce the impact on the planet, decrease automobile use and expense, and reduce consumption of resources. It seemed like a utilitarian choice at first, but eventually spring boarded into biking to maintain the focus on a healthy lifestyle and change the dynamic of his family. Robb and his wife have two kids, who at the time they decided to go car-free were fourteen and eleven years old. Robb studied how often they used the car, and whether leaving it in the driveway was a hindrance to any of their activities. Within four months, they sold the car to a friend, and officially became a car-free family. Then he started noticing benefits he didn’t initially anticipate. Not only did they not miss the car, but they also enjoyed spending more time at home. Being car-free also translated to buying less overall. Robb realized they’d gotten into the habit of buying more than necessary. Robb started to view his former car as enabling choices that no longer seemed appealing.

Eventually, being car-free become second nature. They walked, biked, and used public transportation – including Amtrak, which has a station in Davis – to engage in all their activities. They even moved to a new house twice within the city of Davis, transporting all their belongings, including furniture, by bike. They enlisted the help of friends and had a lot of fun in the

Robb and his family were car-free for sixteen years from 2003 and 2019. Then in 2019, Robb and his wife realized the kids were out of the house and they were empty nesters. They longed to see the distant spots of the beautiful state of California they couldn’t easily reach via public transportation and bikes. They leased a car with the intention of putting it to good use for a few years. But then the pandemic happened, forcing them to pivot in 2020 like so many others. They put off their travels and instead Robb started using the car for a significant volunteer project with Yolo Food Bank as the Coronavirus Response Coordinator. He helped to activate a countywide weekly doorstep food delivery program for senior citizens and other homebound residents within days of the announcement of California’s stay-at-home order. It felt satisfying to repurpose the car for a good cause rather than watch it sit in the driveway unused after all the years of not even owning one.

What kind of impact did sixteen years of being car-free have on Robb and his family? A major one. After years of public service for the City of Davis first on the City Council, then as Vice Mayor and eventually Mayor, Robb worked at UC Davis for the Global Affairs Global Learning Hub as the Director of Intercultural Programs, a position he held until recently. He walked to work as he only lives a mile from campus. He still bikes as a means of transportation even with the leased car at the ready. His son, now thirty years old, happily enjoys life without a driver’s license, and his daughter just got one when she moved to Pennsylvania with her own family, which includes three children. Robb is excited to start his next professional venture as Impact and Innovation Officer at the Yolo Food Bank in Woodland and is considering biking to work for his daily commute of 14 miles one way. After the lease is up on his current car and the pandemic is more under control, Robb may revisit the idea of going car-free again. And if he does, he will undoubtedly put the same kind of careful thought into the decision that he did when he first came up with the idea. A decision that had a positive ripple effect on him, his family, his friends, and his community. Robb Davis may not have intended to be a “roll” model on two wheels, but the label certainly fits.

This article was written by Lisa Montanaro, commissioned by The Bike Campaign. For more information about how to “Drive Less. Ride More.”, contact Maria Contreras Tebbutt at funmaria@sbcglobal.net or www.TheBikeCampaign.com.

Lisa Montanaro is the author of the book The Ultimate Life Organizer and is a freelance writer for print and online publications. She is currently writing her first novel. When not writing, Lisa helps organizations and people be more productive. And when not working or writing, Lisa can be found on two wheels cycling!

Share:
Tags:BicyclingBike CampaignRobb DavisTransportation
Previous : Derek Chauvin’s Attorney Files Expected Motion for New Trial, Claiming Multiple Court Errors
Next : Big Day of Giving: We Have to Raise $4000 by the End of TODAY for Our #BDOG2021 Fundraiser

9 thoughts on “Guest Commentary: Former Mayor of Davis Serves as a ‘Roll’ Model for a Car-Free Lifestyle”