The headline jumps out at you – 56 percent of respondents of a poll commissioned by Joint Venture Silicon Valley say they are likely to leave the region over the next few years.  That marks about a nine point uptick from 2020 when the same question was posed in a pre-pandemic study.  But when you drill down, there 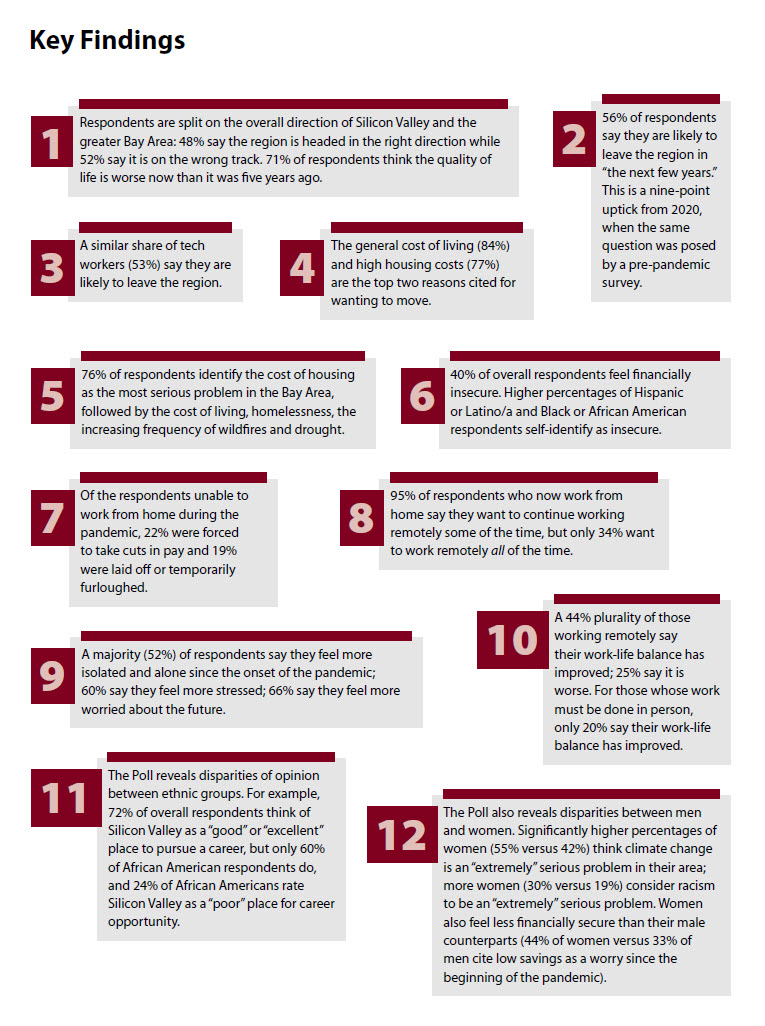 They got a reasonably representative political breakdown by party—about 1000 Democrats, 300 Republicans and Decline To State.

Hancock pointed out that one remarkable piece of agreement here was that, across income and educational levels, the community largely agreed on the challenges.

“This is actually a uniform result.  About 70 percent of us think that the Bay Area is getting worse,” he said.  “That’s a sobering finding.”

The one area where there is some skew is on the issue—“do you think that in the last five years the quality of life in the Bay Area has gotten better, gotten worse, or stayed the same”—you see 92 percent of Republicans with some variation of getting worse, with 59 percent saying much worse.  Democrats also think things have gotten worse, but with about 60 percent and only 17 percent saying much worse.

Everyone else pretty much across the board—age, income, and ethnicity—all agree in the 70 percent or so range.

When we drill down on a couple of measures here—this is all about housing. 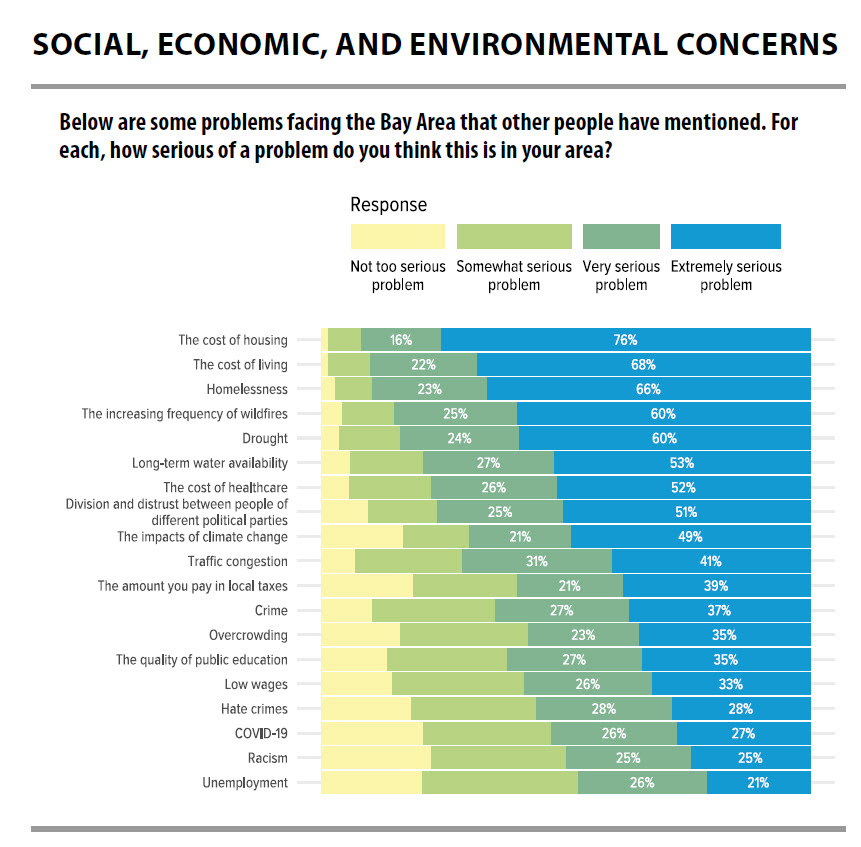 The top three are all related to housing—the cost of housing, cost of living and homelessness.

Seventy-six percent say they view cost of housing as an extremely serious problem and almost everyone agrees is it a problem.  The cost of living is right behind it, at 68 percent saying extremely serious and about 90 percent believing it is extremely or serious.  Homelessness is at right about that.

If you drill down into the second tier, you see a lot of concerns about wildfires, drought and water—all of that related of course to climate change. 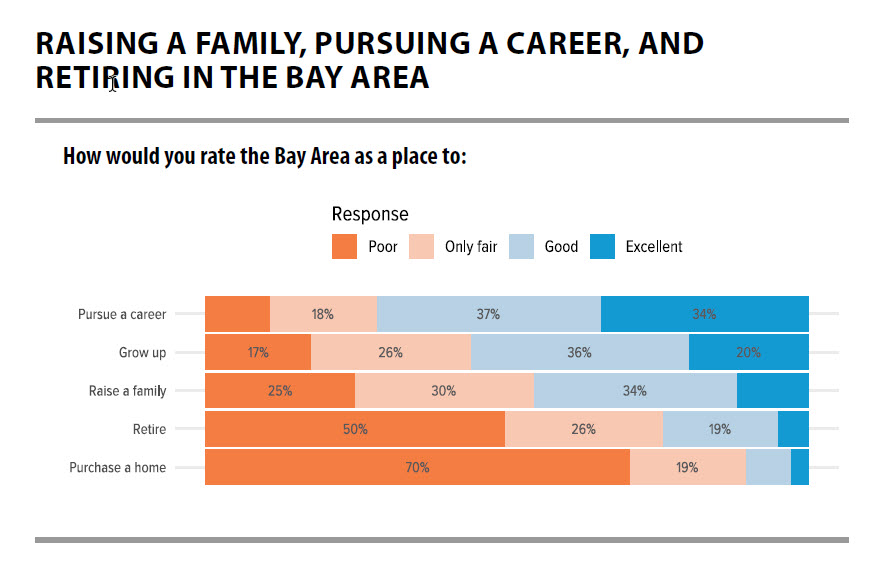 Here is another key indicator.  The vast majority (71 percent) say it is a good and excellent place to pursue a career.  This is particularly true for those with a bachelor’s degree or higher.

“This of course correlates with home prices, no surprise, everybody responding to the poll says this actually a terrible place to buy a house,” Hancock said. 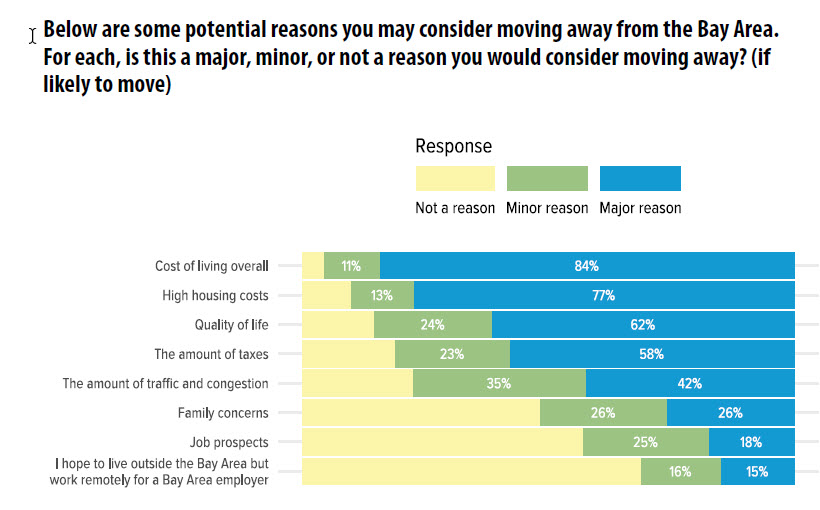 Overall cost of living and high housing costs are the main drivers.

Looking at demographic splits in that:  Not surprisingly, the youngest cohort is most likely to leave but it’s not the huge split that you might expect.  Sixty-four percent of the 18  to 34 versus 54 percent of 35 to 49, and one group much less likely to go are those 65 and older at just 41 percent—that makes sense.

A little surprised the own/rent split is relatively small—64 percent of renters to 48 percent of owners.  The split is there, but it is not a huge chasm.

For me then, the key stat is not necessarily that people are thinking about moving from the Bay Area.  Rather it is the stat on the cost of housing—even among those who own homes—and the divide between those who think the Bay Area is a good place to have a career versus raise a family.

For the most part we know from other surveys that a lot of the people who are fleeing the Silicon Valley and the Bay Area are not leaving the state, they are simply moving elsewhere in the state where the housing market is less heated.

There was another survey strand that I found quite interesting.  People are looking to leave the Bay Area, and they are doing so for housing costs mainly.  A lot of them like remote working, although only one-third would consider working all the time remotely, but only about 15 percent are hoping to live outside of the Bay Area and work remotely for a Bay Area employer.

None of this is hugely surprising.

But the take away, at least for me, is that (a) the housing crisis is a key factor now in the future of this state, (b) if we can’t fix the housing crisis, we will radically alter our region, and (c) we need to address housing supply in order to bring the cost of living in California under control.

Share:
Tags:Bay AreaHousing CrisisSilicon Valley
Previous : Seven Survivors of Crime Speak Up for What They Need from the DA
Next : Man in Possession of Drugs and in Violation of Parole Forfeits Rights, Pleads Guilty

33 thoughts on “Commentary: People Want to Leave Silicon Valley – and It’s All About Housing!”