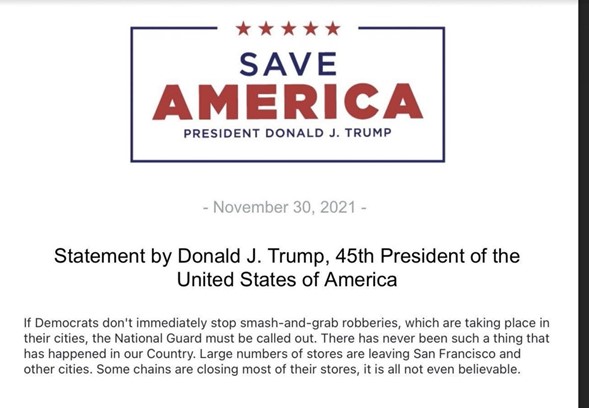 SAN FRANCISCO, CA – Former President Donald Trump recently accused San Francisco officials and the other Democratic Party strongholds of failing to resolve the theft problems that are happening in the city.

San Francisco District Attorney Chesa Boudin shot back that Trump—whom he called the “instigator of the Capitol smash and grab”—should “stay out of SF politics.”

In a report on his political fundraising site Save America, Trump said, “Such a thing has never happened in our country,” referring to the mass robberies that are occurring all around the country, but primarily impacting the state of California.

He then asked the National Guard to help with bringing an end to the robberies.

San Francisco’s Louis Vuitton store in Union Square is one of the stores targeted by bold robbers this month, with video footage showing people

smashing the windows of the retail store and grabbing merchandise.

The “smash and grab” video has caught the attention of the media and many residents are concerned about shopping and their own safety in the areas where theft has taken place.

The recent November rampage followed similar crimes at Nordstrom in Walnut Creek and the Hayward and San Jose malls. High-end malls in Southern California have reported burglaries, as well as stores in Chicago and New York.

Since the November robberies in Union Square, San Francisco has stepped up the police presence in the well-known grocery shopping district.

Trump’s statement on Save America said, “ If Democrats don’t immediately stop smash- and- grab robberies, which are taking place in their cities, the National Guard must be called out. There has never been such a thing that has happened in our country. Large numbers of stores are leaving San Francisco and other cities. Some chains are closing most of their stores, it is all not even believable.”

San Francisco DA Boudin, who filed criminal charges against nine people involved in the robberies, took to Twitter to criticize the former president’s comments and his technique for bringing justice, charging Trump’s policies on “criminal justice has proven to be unjust, corrupt, and ineffective.”