The number of new cases topped 200,000 yesterday for the first time since early in 2021.  It is now more than double what it was last month, and up from 150,000 earlier this week.  Frankly I wouldn’t be shocked

It is hard to know for sure, as there are some studies that seem to suggest that Omicron may be less severe, but I have seen analysis suggesting that might be a statistical artifact.  It may be that, because Omicron has hit people who are already vaccinated or who already have had COVID, those people are getting less sick, but that people who are unvaccinated and have yet to be exposed to COVID might be just as vulnerable as to Delta and the original variant.

The best solution—get vaccinated and make sure you have had your booster.  Despite breakthrough cases, the chance of getting sick and the chance of dying are far higher if you are unvaccinated.

Look at these charts as presented in the NY Times: 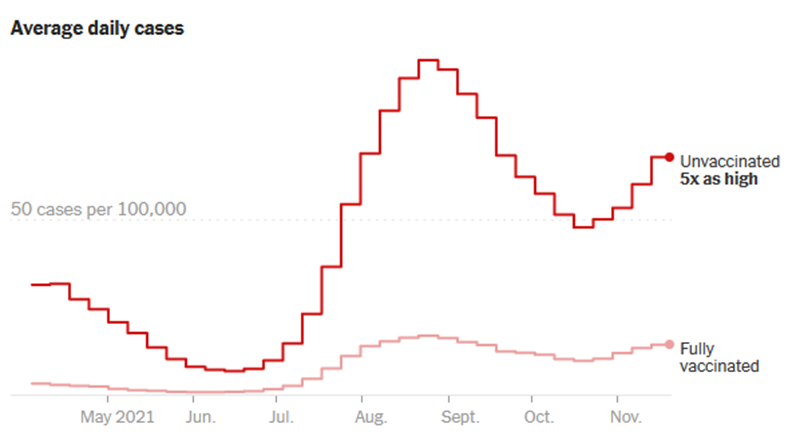 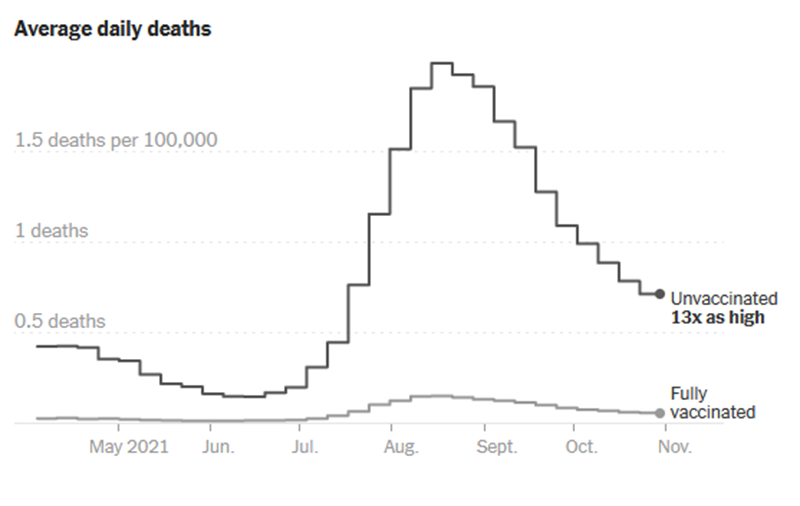 The vaccination rate for those over 12 is at 71 percent for both, and 83 percent for one dose.  That’s probably getting pretty close to the limit.

The NY Times yesterday reported that “health experts say the roughly 15 percent of the adult population that remains stubbornly unvaccinated is at the greatest risk of severe illness and death from the Omicron variant, and could overwhelm hospitals that are already brimming with Covid patients.”

They have found “the threat of Omicron is doing little to change people’s minds.”

Moreover, “Public-health campaigns and employee vaccine mandates have made progress since the summer at reducing the ranks of unvaccinated fence-sitters, people without easy access to health care and those who were hesitant but persuadable.”

The problem as we continue to see is those who are not vaccinated pose a huge threat to everyone in a lot of different ways.

First, that data shows that even people who are vaccinated with their booster can get infected.  Most are not getting sick and not going to the hospital and dying, but that number is not zero.  A huge number of Americans are either over 65 or have pre-existing medical conditions and are vulnerable to serious illness.

Second, the combination of not wearing masks, gathering in large groups, and not being vaccinated is prolonging the agony here.  People who want to get back to *normal* are contributing to us not being able to get back to normal.

Just look what was reported in Yolo County—there was a single workplace holiday party.  The party had 50 attendees.  We don’t know who this was, but we know the result.  Of the 50 attendees, there were 16 cases, of which at least 10 were Omicron.

All sixteen were fully vaccinated and 8 had received their booster shots.

And you say, well, chances are they didn’t get sick, but what happens between the time they are infected and this was detected—how many more vulnerable people got exposed?

Omicron was probably unavoidable given the lack of vaccine reach around the world.  But at some point there might be a mutation and variant that occurs because of the lack of vaccination in the US that could throw us under the bus yet again.

We are playing with fire here.

Finally, the third impact is on the hospitalization rate.  Even if most of the hospitalized are those unvaccinated, that doesn’t mean the rest of us aren’t impacted by that.  It means fewer beds and less response and fewer resources for all the other reasons why people are normally hospitalized.

The NY Times quotes Dr. Jose Romero, the Arkansas health secretary.  He explained that “his state’s vaccination rate, which is hardly budging, reflected how deep the opposition to the shot was among those left to convince.

“Unfortunately, we can’t say that we’ve identified a single thing that has really moved the needle in any great extent,” Dr. Romero said. “It’s just a slow chipping away at this. It’s sort of a mouse eating the elephant one bit at a time. And you just keep going.”

At some point if the hospitals are overwhelmed, perhaps people who refuse vaccination get denied beds and ICU spaces.  That won’t convince people to get vaccinated, because many of them never believe that they will get sick, but it would at least address the hospital resource issue.

In the meantime, I am pretty much convinced that we will never go back to normal.  But we will see.

38 thoughts on “Sunday Commentary: How Do We Solve COVID in Light of Omicron?”