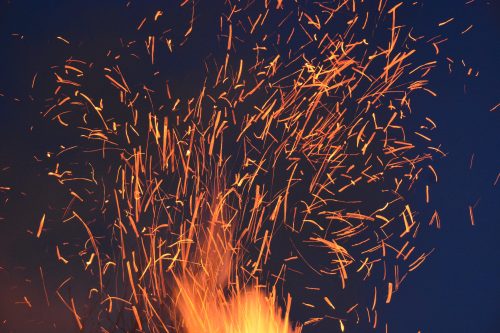 SAN BERNARDINO, CA — Vice President Kamala Harris declared during her visit to San Bernardino on Friday that billions of dollars in federal funds would be dedicated to the mitigation of wildfires raging along the western coastline.

“It is about recognizing that we cannot, as a government or as a society or people who care, only respond in reaction to a moment of harm or danger,” said Harris, “We must also be able to use technology and common sense and the expertise of those on the ground to understand we have the tools to predict these wildfires ahead of time.”

Before her appearance, Harris took an aerial tour of the San Bernardino National Forest; the site of the El Dorado Fire in the fall of 2020, which burned nearly 23,000 acres and claimed the life of a firefighter. That fire season was the worst in California history in terms of acres burned. However, such disastrous wildfires have become more and more common, according to Tony Scardina, deputy regional forester for the Forest Service’s Pacific Southwest Region.

Within hours of Harris’ announcement, her warnings were being substantiated. On Friday night, a fire started by a private burn and exacerbated by strong offshore winds swept over Big Sur’s Colorado Valley. The National Weather Service’s Bay Area Branch, in a tweet, described the fire as “stubborn” and “surreal.” It burned 700 acres, prompted evacuations of residents in the nearby town, and caused a portion of the oceanside Highway 1 to close.

As the government invested enormously in post-fire rehabilitation, some scholars  express their concerns with pre-fire activities. “We are not, by any stretch, out of the hole when it comes to the drought situation. And so I think it’s prudent for water agencies to still be planning based on what they have at hand, and not by what or may not fall out of the sky over the next several months,” said Michael Wara, director of the climate and energy program at Stanford University’s Woods Institute for the Environment.

He noted that most of the federal funds Harris announced for California would go into forest restoration and post-fire cleanup, as opposed to the preventive work like water conservation and meteorological monitoring.

“This money is more likely to be devoted to post-fire activities as opposed to what I think of as pre-fire activities, the things that we need to urgently do as a state and also the federal government needs to do … to reduce the risk of catastrophic fire,” said Wara.