**This report is a follow-up to the previous report with the same name. The following data was compiled by The Vanguard to show the continued disparity of Senate Bill 1437 (SB 1437) denied and granted felony murder retrial petitions (Penal Code §1170.95).

A new team of journalists and interns worked together on gathering this information between the months of October 2021 and January 2022. Due to the nature of dealing with many different county bureaucracies throughout the state of California, some counties which were accounted for previously have not been now.

However, some of which were not listed in the previous report, are included.  Because this document is a follow-up, it should be read in conjunction with the previous

Before SB 1437, someone could get charged with felony murder if they participated or contributed to a felony that resulted in that person’s death. There was no requirement for the person convicted of felony murder to be involved in the killing or intended to kill anyone. The new Senate bill is meant to change those broader requirements.

In order to be convicted of felony murder under SB 1437, individuals must meet one of the following qualifications:

This bill also applies retroactively, meaning that incarcerated individuals who were convicted of felony murder under the old statute would have the opportunity to petition for resentencing through a petition pursuant to Penal Code section 1170.95.

Resentencing does not necessarily mean that the defendant gets their sentences reduced. Rather, it is up to the judges’ discretion of how their petition will be processed.

However, SB 1437 has been met with considerable opposition, particularly from CA district attorneys and trial court judges. This pushback has potentially affected the amount of resentencing petitions that get denied or granted.

Due to the continued resistance to the bill, The Vanguard decided to conduct a follow-up of the legislation effects. This report has compiled new data from 46 counties (four of which were unaccounted for previously) to record the statuses of each of the listed counties 1170.95 petitions. 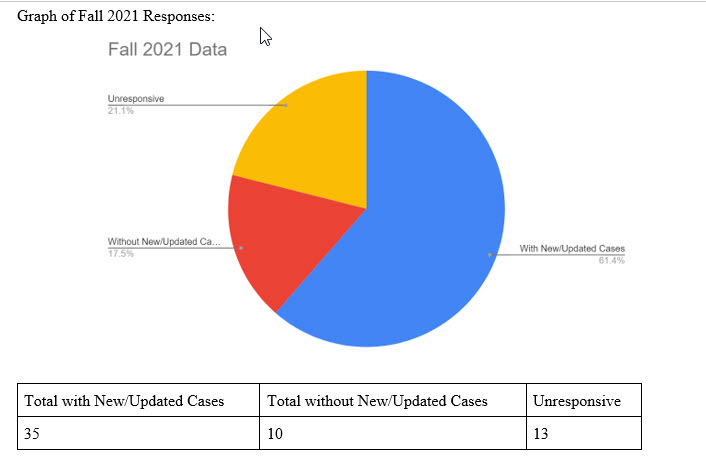 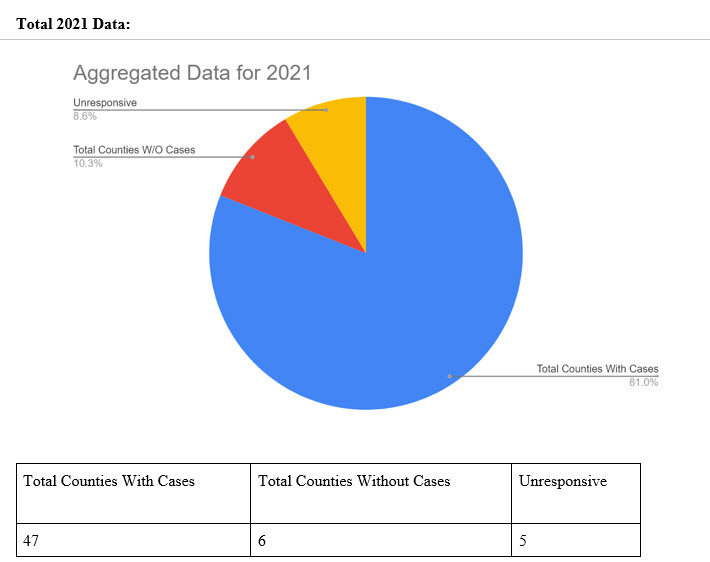 Unresponsive Counties: Glenn, Imperial, Stanislaus, San Mateo, Sonoma (did not respond to this report and the previous one).

Counties who did not report this time but had done so previously: Orange, San Francisco, Shasta, Sierra, Siskiyou, Tehama, Tulare.

New Counties added that were not accounted for in the previous report: Marin, Santa Barbara, San Luis Obispo, Tuolumne. 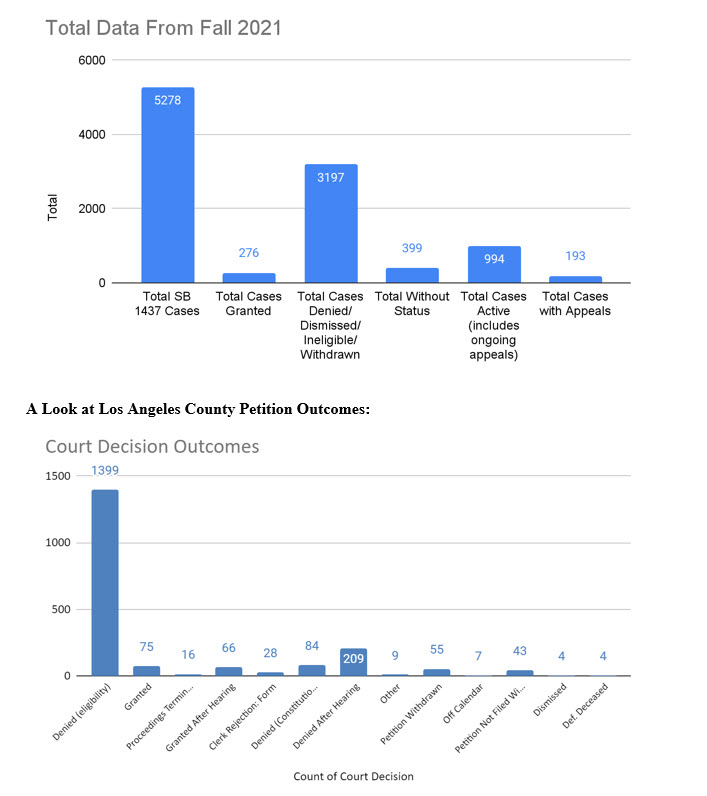 Responsiveness of Counties in the Follow-Up

In this follow-up report, we were able to contact four of these previously unresponsive counties, making the total combined response rate 91 percent.

The four counties added to this report including Marin, Santa Barbara, San Luis Obispo, and Tuolumne have a combined total of 71 SB 1437 cases. Of these 71, only one case was granted, 48 cases were denied or dismissed, and 22 have active ongoing appeals.

Additionally, there were seven counties that responded to the initial public records request but did not respond to the follow up request in this report. These counties included Orange, San Francisco, Shasta, Sierra, Siskiyou, Tehama, and Tulare.

Of the 45 counties that responded to the follow-up request, 35 had new or updated cases to report. There were also six counties that had no SB 1437 cases – Alpine, Colusa, Del Norte, Lake, Mariposa, and Mono.

Given the fact that 12 counties were unresponsive to our follow-up request, the number of cases granted out of the total collected for Fall 2021 was 276.

In the first report, of the 4,963 cases in counties across California, 277 were granted. This initial report included San Francisco county. which had the highest ratio of cases granted with 23.29 percent.

The number of cases granted could potentially be skewed because 12 counties were unresponsive and of the four counties that did respond to the follow-up request that hadn’t previously, the percent of cases granted was 0.01 percent (1/71).

A more comprehensive examination of the data is needed to determine whether the number of cases granted is increasing, in which counties this is happening, and in which counties it is not. This continues to be a challenge when counties do not respond to the public records requests.

The rate of cases denied seems to be steady. This rate could be influenced by a number of factors including the COVID-19 pandemic that continues to strain the criminal justice system.

Potential Flaws or Unaccounted for Aspects of this Report:

To account for potential errors the team working on this project thought it wise to list potential drawbacks after completing it.

When undertaking a report of this size, various details are likely to get lost in the cracks. One such detail is that the members of this team do not know the intimate details of each case or defendant. Most of the subjects of this report are (unfortunately) boiled down to simple statistics to highlight the disparities found in SB 1437.

Which ones are denied, granted, dismissed, etc. This is due to the extraordinary amount of cases, which numbers in the thousands. Therefore, some of these cases could have been rightfully decided, and others not so.

However, it is still critical to understand the importance of the disparities with the data found in the report. Given what SB 1437 was designed to do—to offer some form of recourse for those convicted of felony murder—the overwhelming volume of denials and dismissals shows the possible shortcomings of that law and its use in the courts.

Another aspect that has hindered this report is time and not enough of it. While the previous two teams had nearly a year for their report, this team has had roughly three and a half months. The shortage of time is because various factors, such as some of the researchers graduating, moving away to other jobs, or simple scheduling conflicts.

Therefore, this report was not able to get dig deep enough with as many counties that the previous teams did. However, some new counties were accounted for, which were previously absent.

Some counties, particularly certain DA offices, remained uncooperative in assisting the Vanguard’s SB 1437 team. So some of the researchers had to reach out to public defenders instead, or could not get a hold of the appropriate people at all. Since the certain data provided to the team was incomplete, it had to get pieced together.

Firstly, to account for the first flaw, conduct a random sample study where cases are chosen blindly. Then read and go through each (preferably with someone with some experience in the criminal legal field—particularly SB 1437) and try to ascertain (objectively) whether the cases were decided in a just and fair manner. Perhaps do so several times over to account for bias. **(This is a rough outline of what to do to account for this drawback.)**

The other flaws can only be accounted for if “there was more time” and “hopefully the county bureaucracies play nice” so it is moot to address them. There is not much control over those variables.

This report is eight counties short of the previous original counties in the first report and has three newly added counties. And yet the figures are still greater than those in the old report. There is a total increase compared to the last report’s sum—and that takes into account that this team only obtained information from fewer counties. Therefore, the actual increase is at least a few points higher.

This means more and more defendants are attempting to find legal recourse for their felony murder convictions. Yet an overwhelming majority still get denied.

More attention must be paid to this part of the justice system. Few news outlets are reporting on this issue, while felony murder gains more public attention nationwide. If CA is to remain at the forefront of this issue journalists must examine these cases further.